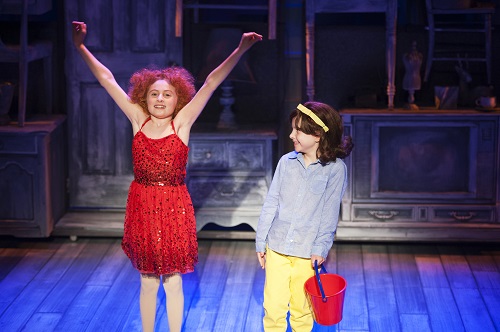 The year is 1951 and Little Bertie  (Brooklyn Shuck) is lost on a beach in Atlantic City, NJ.  Looking for help to find her mother, she walks up to another little girl her age and says, “I’m lost and I’m scared.”  Comforting her, Little Cee Cee (Presley Ryan) reassuringly says, “You ain’t lost.  I found ya!”  And so begins the story about a lifelong friendship between two females in a world premiere musical called Beaches which is making quite a splash at the Signature Theatre in Arlington, VA.

Based on Iris Rainer Dart’s 1985 novel of the same name, this newly adapted world premiere musical directed by Eric Shaeffer includes Ms. Dart penning the lyrics and teaming with Thom Thomas to write the book.  David Austin completes the team as the music composer. For those who are fans of the 1988 film adaptation starring Bette Midler and Barbara Hershey, you can look forward to hearing the song “The Wind Beneath My Wings” by Jeff Silbar and Larry Henley.

Besides writing nine novels, including Beaches, Dart was the first woman comedy writer for The Sonny and Cher Show in the 1970s.  Interestingly, Dart’s experience in working with Cher influenced her to create the character Cee Cee Bloom in her novel Beaches.

In this play there are actually 3 actresses playing the role of Cee Cee Bloom in order to cover the different time periods of her life. Presley Ryan is Little Cee Cee, Gracie Jones is Teen Cee Cee, and when Cee Cee is all grown up, Alysha Umphress takes to the stage. The same formula is used for the role of Bertie, Cee Cee Blooms best friend.  Brooklyn Shuck is Little Bertie, Maya Brettell is Teen Bertie, and when Bertie is all grown up, Mara Davi takes to the stage. You would think that having three different actresses of very different ages for the same role would make continuity very difficult, but here, thanks to the very talented and able cast, the characters of Bertie and Cee Cee remain intact and consistent throughout making the actress changes seamless. 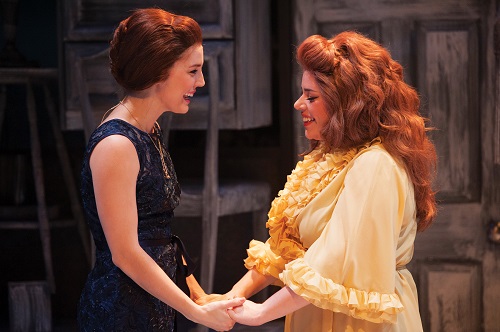 This vehicle of using different actresses for the same role is used to full benefit during the song “My Perfect Wedding” where all six actresses are on stage at the same time.  Here the song tells the story of how Cee Cee and Bertie dreamt about getting married throughout each stage of their lives.  Furthering their message of friendship, Cee Cee and Bertie proclaim that they will always be in each others lives no matter what.

During the song “The Letters” Cee Cee and Bertie write to each other about their lives from 1951-1957.  The song is a celebration of Cee Cee and Bertie accepting each other for who they are; Cee Cee is “loud and funny” and Bertie is “pretty and not stuck up.” We also learn that Cee Cee’s dad got into a big fight with his wife Leona Bloom (a spunky Donna Migliaccio) and packed his bags and moved out.  Bertie reveals that her father died before she was born.

Both mothers don’t want their daughters to dream.  “I don’t want you getting your hopes up,” says Leona Bloom to her daughter Cee Cee about landing a leading role in a play.  Bertie’s mother, Rose White (an upper crust Helen Hedman) wants her to marry rather than pursue a career. Despite their unsupportive mothers, Cee Cee and Bertie encourage each other to keep their dreams alive because they are “Extraordinary.”

In the story Cee Cee and Bertie experience love and loss with men.  They battle to reach success in their careers.  They even have fights.  Through it all, they remain friends. 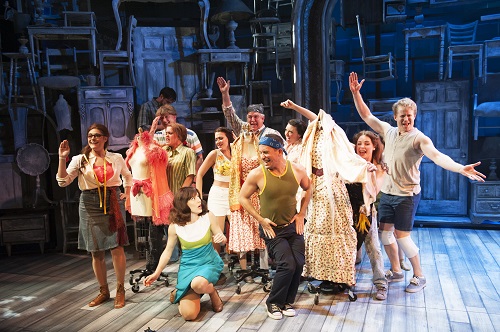 Production values like the precise 10 piece live orchestra led by Gabriel Mangiante and the lovely period costumes by Frank Labovitz are high. I do question, however, the unconventional set design by Derek McLean which reminds me of the walls in a Cracker Barrel restaurant where a hodgepodge of items like chairs, dressers, lamps, and tables clutter the walls.  For me, the clutter on the walls served as a distraction from the action on stage.  The rest of the set design worked very well with two separate remote control platforms that easily brought on and off living rooms and bed rooms.

The songs, for the most part, are forgettable, but they sound professional thanks to the stellar orchestrations by Lynne Shankel.   And while I don’t remember much of the melodies except for “The Wind Beneath My Wings,” I do remember the performances associated with the songs. Presley Ryan is adorable as the fiery Little Cee Cee, bravely opening the show with the song “What a Star” where she shows Bertie her act, complete with cute choreography by Dan Knechtges.  Alysha Umphress as Cee Cee is great in all her songs, but delivers a particularly meaningful rendition of “The Wind Beneath My Wings.”  The male characters aren’t very well developed in the show but Matthew Scott as John Perry, the community theatre director, sings sweetly to the woman he loves in the song “Ce-Celia.” A few tweaks and Beaches could sail its way to Broadway.  For example, having too many songs in the show is causing some rough waters. Having fewer songs will leave more time for dialog which could iron out issues with some jarring plot points and songs that don’t move the story forward can be cut.

Overall, Beaches is entertaining.  It also reminds us of the value of friendship between women.  Signature Theatre, led by Artistic Director Eric Shaeffer and Managing Director Maggie Boland, continues to be the leader in producing quality, world premiere musicals.

Running Time: Two hours and 15 minutes, with one intermission.