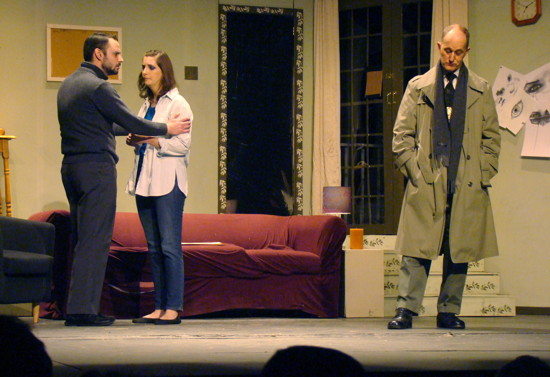 Dark Passages by Shannon Michal Dow, Jan Henson Dow and Robert Schroeder is a slice of life from any given news headline. In production at Bowie Community Theatre at White Marsh Park, Dark Passages is a true whodunit to the very end. Every male character is suspect and for a minute, it seems that one of the female characters is just as guilty.

Directed by John Nunemaker, the play takes place in a small college town that has been terrorized by a rapist and girls have been disappearing. The action takes place in Sandy Barker’s studio apartment that is modestly decorated with contemporary furnishing: a maroon sofa bed, a telephone table and a dresser with that has an abstract painting propped up.

Chrisshall Daniel who is quite sassy plays Sandy. She comes home to her landlord in her apartment and a present on her bed – that was supposedly left at her door. Once her landlord leaves, Sandy tries on the sexy black nightgown that leaves her thrilled, believing her boyfriend is coming over.

Instead, enter Bret Conway played by Amanda Magoffin, who confronts Sandy about her time spent with her boss, Mark played by Pat Reynolds, and Bret’s boyfriend. In the beginning, Bret is a very confident woman but as the action progresses and the bodies start adding up – Sandy has disappeared – Bret struggles greatly with who to trust.

‘Dark Passages’ is a true whodunit to the very end.

Scott Beadle is creepy, creepy, creepy as Harold Lemb the landlord and maintenance man for the house. He slithers in and out of Sandy’s apartment that later becomes occupied by Bret. Beadle plays the creepiness to the hilt, always knowing what is going on with his tenants thanks to his voyeuristic behavior. He peeks at the girls changing their clothes in front of the mirror and when the apartment is empty, he sneaks about, fondling the black nightgown that was a gift for Sandy. Later an identical piece of lingerie is presented to Bret. She mistakenly thinks it’s from her boyfriend Mark.

Asked by both gals at two different occasions, Harold constantly measures but never succeeds at repairing the broken windowpane in one of the French doors. It’s an excuse for him to be in Bret’s apartment and easy access from the fire escape for not only the assailant but for twisted Detective Russel Craig played by James McDaniel, to enter. Knowing Detective Russel’s checkered past, it’s easy to waiver back and forth – good cop, bad cop? McDaniel plays it well and when it’s warranted in the storyline.

Lenora Spahn plays the sassy strumpet Gillian Hastings; she commands the stage with her overwhelmingly aggressive behavior and stunning physique. When her relationship comes to an end and her boyfriend kicks her out, Gillian comes to stay with Bret for a few days. She takes on both Mark and Eric, the neighbor. She likes her men and is not shy about it. Spahn definitely adds a splash of spunk to this production.

Matt Leyendecker plays Eric Soames with a great sense of mystery. He too is a questionable character as he sets his sights on Bret. Is he on the up and up? Is he a good neighbor or a serious killer? Leyendecker presents just the right level of body language, leaving all these questions unanswered until the final line of the play.

The pacing of Dark Passages is even with adult language and themes.

Running Time: Approximately 2 hours with one 15-minute intermission. Allow about ten minutes for parking and a short walk to the theatre.