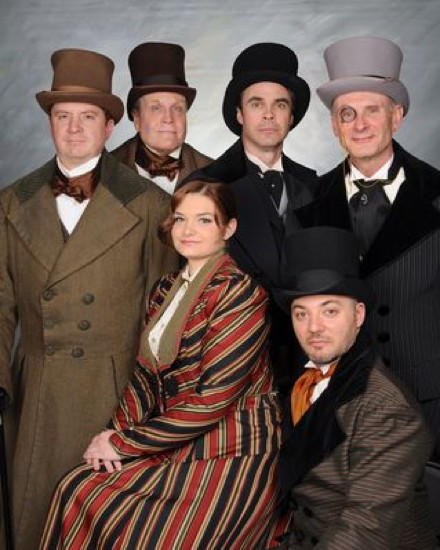 The theatre goes dark, a scream rips through the night, and the sound of pounding footsteps fade as the murderer hastens from the scene.  And this is just the first few minutes of the production of Dr. Jekyll and Mr. Hyde at The Vagabond Players.  Trust me when I say that the excitement, thrills and energy don’t end there.  They continue to increase throughout the show, thanks to a good story and an extremely talented cast and production team.

The Vagabond Players’ production of Dr. Jekyll and Mr. Hyde was adapted by Jeffrey Hatcher in 2008 from the Novella, Strange Case of Dr. Jekyll and Mr. Hyde, by Robert Louis Stevenson, which was first published in 1886.  Dr. Jekyll is the epitome of a well-bred gentleman in Victorian-era London.  He becomes obsessed with the “nature of man” and is disturbed by his own wisps of evil thoughts and desires. Those less-than-pleasant impulses trouble him enough to find a way to isolate his good behaviors from his bad, hoping to make himself a man who is all good with the bad shut away.  Dr. Jekyll soon finds that being “evil,” manifested in Mr. Hyde, is far more liberating and pleasurable and will soon consume his “good” self.

Overall, ‘Dr. Jekyll and Mr. Hyde’ is very well done and is an evening both your “good” and “evil” side are sure to enjoy!

In Hatcher’s adaptation, the good-and-evil battle still wages, but more layers of interest are added, including a love interest for Mr. Hyde and dividing the role of Mr. Hyde among four actors.

Gregory Guyton, who plays Dr. Jekyll, completely encapsulates a man who cares deeply about his social standing and who, on the surface, is proper to a fault.  He then slowly unravels under the influence of the decadent feelings and actions of Mr. Hyde. Tom Moore, as Mr. Lanyon and Mr. Hyde, was fantastic in his many roles.  As Mr. Hyde, his expressions and mannerisms left no doubt in my mind that Mr. Hyde is driven by nothing but selfish, evil intentions. 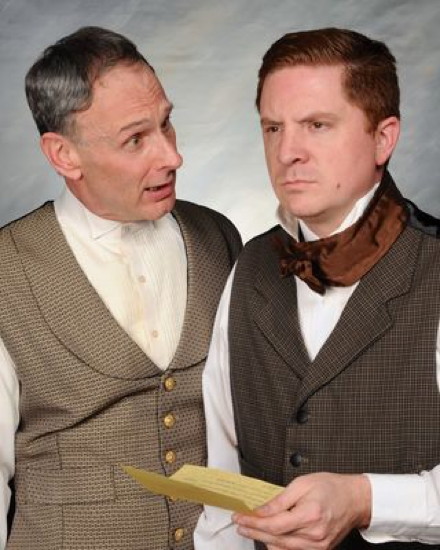 Tiffany Spaulding, with her many roles including Elizabeth, a maid and a prostitute, held her own as the only women in the play.  Each character is played with nuances that gently separate each personality.  Michael Styer, Thom Peters and Michael Panzarotto also all played Mr. Hyde as well as other characters.  When Moore, Peters, Panzarotto and Styer, all as Mr. Hyde, converge on Dr. Jekyll, each one brings the intensity of a different aspect of Hyde’s strong personally, and I realized that after the scene was over, I had moved to the edge of my seat and was clutching my coat in my lap.

John W. Ford’s direction and set design contributed greatly to the intensity of the show.  A door moved around the sparse black stage to signify different buildings.  Mr. Hyde’s residence has a red door with a ring of dirt around the nob eluding to an unkempt home in a less affluent neighborhood.  Maurice “Moe” Conn’s lighting and Devin Mckay’s sound set the changing scenes that added suspense and highlighted the necessary elements to move the story along.  Mary Bova’s costumes are exceptionally well crafted and period precise.

Overall, Dr. Jekyll and Mr. Hyde is very well done and is an evening both your “good” and “evil” side are sure to enjoy!