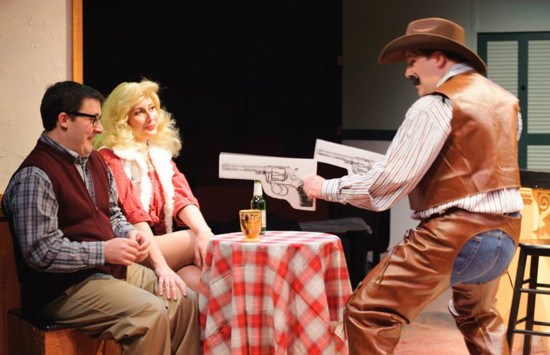 You will never laugh harder in your life then you will watching Five Course Love, now playing at Spotlighters Theatre. It is a fresh twist on a modern, and at times, not so modern love story. This play will have you at the edge of your seat and practically begging for more. Love is divided into five scenes that represents five themed dinners from Southern bar-b-que to traditional German cuisine. Each scene displays characters more colorful and amusing than the last. The talented cast of actors and singers consisted of Tim Grieb, Brett Rohrer, Shani Hadjian, and Lauren Schein. Each actor brings a comedic element to each storyline that seems completely effortless. You have the opportunity to witness Italian Mafioso’s to Mexican horse riders with a complicated love stories and absurdities that always make a comical situation. The costumes worn by the actors match each character and scene perfectly. You will see everything from a leather corset to 1950’s cat eyeglasses and admittedly they added to the authenticity of each diverse character.

…’Five Course Love’ is an out of this world comedy that makes you chuckle for ninety minutes straight.

The music in this play is phenomenal. Directed by musical director Michael Tan, every piece corresponds with each scene and in certain instances becomes the star of the play. The music was played live and consists of Michael Tan himself on the keyboards, Greg Bell on the guitar, and Bill Georg on the percussion. 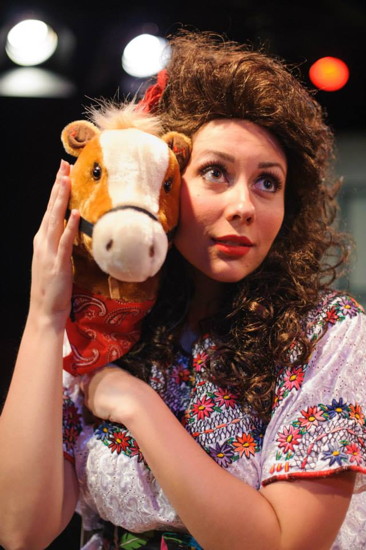 The small theater allows for an intimate setting and makes the audience feel like they’re interacting with the cast, but the small theatre is not without a few problems. Depending on where you sit in the theatre, your view of the play may be obstructed by three pillars at three different angles on the stage.  I had the unfortunate luck of sitting in a seat at a strange angle, slightly behind the stage and a pillar blocked my view of what was happening on stage for seconds sometimes minutes at a time. I recommend you arrive a little early if you have the opportunity to do so to pick seats that allow you to fully view the stage.

Advisory: This show contains adult subject matter that is not appropriate for children.