Theatre Review: ‘Hamlet …The Rest is Silence’ at Synetic Theater 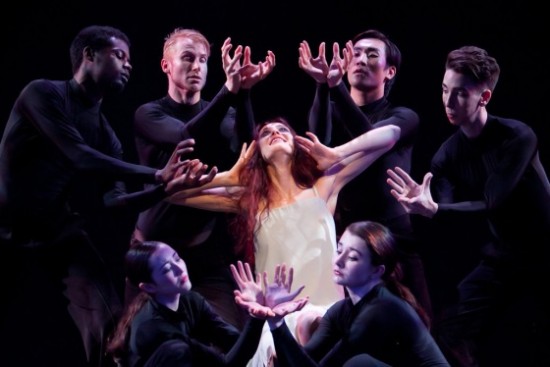 Irina Kavsadze as Ophelia with Ensemble. Photo by Koko Lanham.

It’s hard to forget the sensation Synetic Theater created when they first premiered their wordless Shakespeare cycle 12 years ago.  Hamlet … The Rest is Silence stands as their signature production and a bold artistic statement; for the Washington theatre scene, it’s what Chekhov’s Seagull was for the Moscow Art Theatre.  Back then it featured director Paata Tsikurishvili in the title role and his wife, Irina, who choreographed and performed the role of Ophelia.  Given their talent and commitment it is no surprise to find Synetic, 10 years on, chock full of Helen Hayes awards and happily settled in their own space as the premiere movement theatre company—not to mention one of the premiere theatre companies, period—of the Washington area.

Not only does another revival of Hamlet offer the company a chance to return to an old hit show, it offers them the opportunity to make greater use of the technical resources now at their disposal.  Return audiences can look forward to a new, innovative lighting scheme by Brittany Diliberto, a thrilling and diverse musical score by Konstantine Lortkipanidze (ranging this time from Mahler to hip-hop to space-age bachelor pad music), and new performers in the lead roles.  Alex Mills fully embodies the Danish prince, exuding all of Hamlet’s the youth and turmoil.  As Ophelia, Irina Kavsadze continues to grow as a young member of the company, and her suicide scene is one of the most memorable of the evening.  And it almost goes without saying that Ms. Tsikurishvili’s choreography continues to fascinate, and seems to grow more finely-tuned each time I see it. 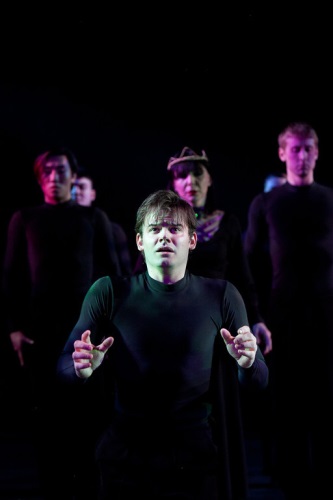 Alex Mills as Hamlet with ensemble. Photo by Koko Lanham.

Newcomers to this production might want to make themselves familiar with the basic outlines of Shakespeare’s play, as well as its key characters—OK, so that covers the 3 of you out there who’ve never seen it before.  Seriously, though, one of the joys of this production is to see how Synetic adapts an overly wordy, 4-hour monster of a script and distill it into a wordless hour-and-three-quarters, consisting of 14 scenes.  Given the emphasis on movement, parts of the plot necessarily have to change—we forget that some of the most fateful moments (like Polonius’ murder) are triggered by auditory cues.  And there remain scattered moments when the action becomes obscure; but the story still unfolds at Synetic’s signature breakneck pace, with an astonishing intricacy of movement.

Irina Tsikurishvili is as brilliant as ever as Gertrude, and fellow-founding member Irakli Kavasadze proves once again that he owns the role of Claudius, with or without words.  In Hector Reynoso we have an able personification of the meddlesome Polonius, and Scott Brown gives us a truly vengeful Laertes, whose hatred for Hamlet requires no words whatsoever.  Among the supporting cast Irina Koval owns the stage as a hilarious Player Queen, while Vato Tsikurishvili doubles as the Gravedigger and a more acrobatic, amusing Osric than you’re likely to see for some time.

Given their talent and commitment it is no surprise to find Synetic, 10 years on, chock full of Helen Hayes awards and happily settled in their own space as the premiere movement theatre company—not to mention one of the premiere theatre companies, period—of the Washington area.

In a way it’s really unfair for me to single out individual performers, because the heart of any Synetic production is the subtle work of its ensemble, tasked here with embodying any number of scenic elements (walls, doors, waves, flowers, etc.), and often making ingenious use of set pieces originally designed by Georgi Alexi-Meshkishvili.  Although often in the shadows, it is their work that gives the evening its focus and continuity, and enables the lead roles to truly shine. 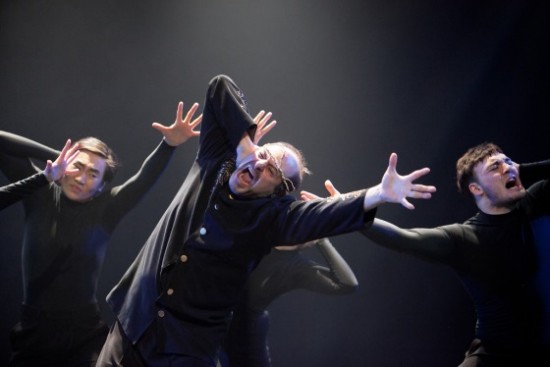 Irakli Kavsadze as Claudius with Ensemble. Photo by Koko Lanham.

Synetic’s current revival of Hamlet is a reminder that the Tsikurishvilis are committed to passing their skills onto a new, international generation of performers; and as their reputation continues to grow on the international stage, we are truly fortunate that they have chosen to make Washington, and especially that little wart also known as Arlington, Virginia, their artistic home.