Theatre Review: ‘I and You’ at Olney Theatre Center 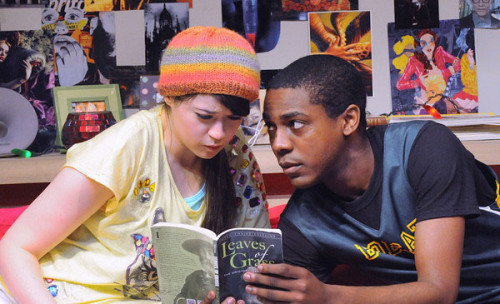 Rachael Tice as Caroline and Thaddeus Fitzpatrick as Anthony. Photo by Stan Barouh.

“It is the new plays that really pave the way forward for this art form and for the artists who are a part of it,” says Artistic Director of the Olney Theatre Center, Jason Lowewith. As part of the National New Play Network Rolling World Premiere series, Olney Theatre Center is producing I and You by Lauren Gunderson and directed by Eleanor Holdridge.

Olney Theatre Center is proud to be a part of the National New Play Network which is a consortium of theatres across the country that specialize in producing and developing new plays.  The Rolling World Premiere series takes a new script and gives it three different productions across the country.  The first production of I and You was at the Marin Theatre Company in California.  The second is at Olney before heading to its third destination, Indiana.

The play begins in the bedroom of Caroline, a sickly teenager in high school with a chip on her shoulder.  Caroline is first seen dancing feverishly to the music on her smart phone when her classmate Anthony enters her room, surprising her.  “What the hell,” she says.  To that he responds by reciting poetry from Walt Whitman’s “Song of Myself,” “I and this mystery…Here we stand.”

Anthony is in Caroline’s room because he chose Caroline to be his partner for a project for Ms. Branson’s American Literature class.  He is not artistically inclined.  Anthony tried making a poster as part of the project, but even the handwriting on it is barley legible, let alone artistic.  He asks for Caroline’s help, but she vehemently declines, at first. 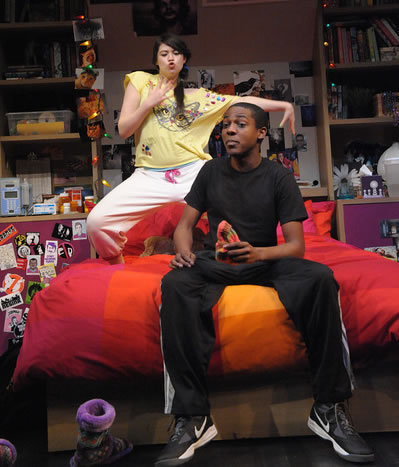 Rachael Tice and Thaddeus Fitzpatrick as Caroline and Anthony. Photo by Stan Barouh.

Caroline is always angry at the world because she has been sick all her life.  So sick, in fact, that she gets most of her education from home.  A few things in life do bring her joy.  She loves taking photos with her phone, especially funny poses with her cat.  Caroline also loves listening to music, including Jerry Lee Lewis’ “Great Balls of Fire.”  She seems to love her stuffed animal most of all which is a turtle that doubles as a planetarium.

Anthony is part nerd, part jock.  When not reading poetry and listening to the music of John Coltrane, he is a member of the basketball team.  Anthony is shy about dating women, but is sensitive, caring, and patient.

This play performed by only two actors spans one day.  During that time Anthony learns that Caroline is in dire need of a liver transplant.  Anthony has a secret as well, but he doesn’t reveal it until the last part of the play.

Throughout the play Rachael Tice as Caroline is superb at expressing emotions of pain, anger, hurt, and hysteria.  With that said,  her character is supposed to be very sick so it doesn’t make sense why she can dance on a bed and yell and throw fits so much when the symptoms of someone with liver disease include fatigue and weakness.  It could be argued that the surprise ending explains that, but during most of the play you don’t really get a sense that she is very close to death.

Thaddeus Fitzpatrick does a fine job as Anthony.  His secret weapon is his charisma which keeps the dialog interesting. Thaddeus’ positive attitude against Rachael’s negative attitude serves as an interesting contrast.

No spoilers here, but I can tell you that the surprise ending changes everything you thought you learned about the characters and plot.  For many the ending will be emotionally inspiring and moving.  As for this fuddy-duddy, I thought the ending tried too hard to be artsy and weakened the development of the story and characters.

Because of the topic and young characters, I believe that high school and college students will relate to I and You the most. More than just watching two students do their homework, this compelling and thought-provoking play is about two different teens learning about each other and the meaning of life and death.

Advisory:  Language.  Recommended for ages 14 and up.