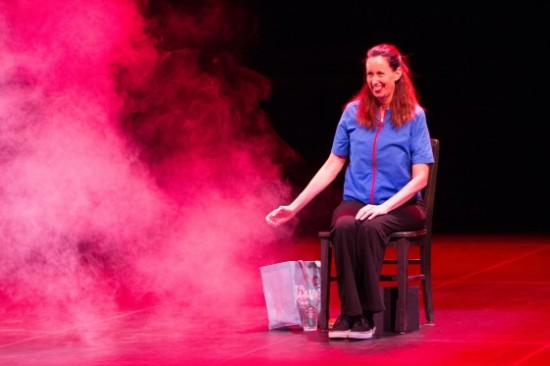 Performers create solo shows for any number of reasons. The ones that resonate the most with me are when they are based on the performer’s life and are presented honestly.

In the case of Ann Randolph’s Loveland, currently playing at Arena Stage’s Kogod Cradle, the premise is a good and often touching one but then the show tries to be funny.

‘Loveland’ has the makings of something quite moving…

Frannie Potts is on a flight back home to Cincinnati, Ohio to spread the ashes of her recently departed mother in her home town of Loveland. The ashes happen to be in her suitcase and Frannie is very worried about this because if something happens to her mom during the flight, Frannie will be devastated. Frannie is one of those passenger horror stories you hear about all the time. You know the type, the one who constantly bothers the stewardesses and doesn’t follow directions. For example, she gets up before the seat belt signs are turned off so she can dance in the aisle. 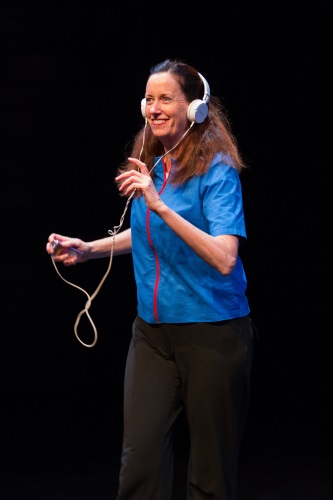 Through the course of the flight we are shown in flashbacks the relationship between Frannie and her Mom. Her Mom is never afraid to speak her mind, even when she has to go into a nursing home. Then turbulence hits the aircraft and…you can only guess.

In between all the tenderness there are some comedic attempts. The franticness on the airplane that Frannie creates is amusing but the song she sings at her Mom’s nursing home is distasteful and shows that Frannie is lacking in any kind of filter. The thought with the song is that people come into the world and leave it the same way, by following the sound of a drone. This is illustrated by Frannie playing a harmonium. The gist of the song is “Die already, follow the drone.” Can you imagine hearing this in a place where most of the patients are terminally ill? Then we have Frannie’s non- filter disclosing how she can turn herself on at Whole Foods. You can’t make this up. Then, of course, there is the love note she writes to the pilot (Voice of Wayne Wilderson) about how they share a love for nature mid flight and fantasizes about having a night alone with him.

Randolph’s characterizations are fine with the mother being the most interesting. She also nails the no bedside manner types that make up the healthcare system. There is the over perky nursing home administrator and the nurse that just blurts out that her mom has passed away. Mind you this is over the phone and, to make matters worse, we come to find out the social worker at this place should have already called. I did find Randolph’s diction a little rough to understand when playing Frannie. I could not tell if this was an attempt at a mid western accent or just speaking too fast, but if a solo show is performed too manic it takes the audience out of the story.

It seems to me that Loveland is actually two shows and can’t decide which one it wants to be. When Randolph is playing serious, the show takes on something warm and tender like when she is fighting over the phone with a social worker to protect her Mom’s quality of life after she goes into the nursing home. When it turns to comedy, you are left asking “Why does she feel this needs to be there at all?”

Director Joshua Townshend-Zellner and dramaturg Jocelyn Clarke have tried to keep this show cohesive and the staging is minimal but effective.

Loveland has the makings of something quite moving but for now, until Randolph and company can decide what they want from the script, Loveland is at best a bumpy ride.