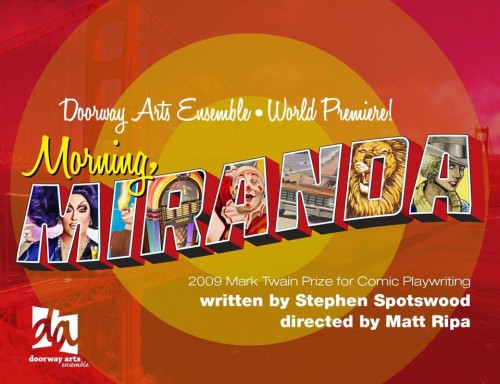 Ever wondered what it would be like to talk to your parents after they’re dead?  Or worse, have them continue to nag and question you and your life choices excessively from the other side? Add some drag queens, a collectively confused circus troupe, and a stack of postcards from your heretofore-unheard-of father, and you’ve got Stephen Spotswood’s Morning, Miranda.

… an interesting look into the process of letting go

The curtain rises on a rainy cemetery where the suddenly deceased Helen (Sarah Holt) is being mourned by a group of actors. Much to her daughter Miranda’s surprise, these goofballs were hired by Helen’s lawyer to attend the funeral, as stipulated in Helen’s meticulous will. Miranda, played by a somewhat stiff K. Clare Johnson, stumbles into the cemetery stunned and a little drunk, and bumps into her recently deceased mother’s ghost. 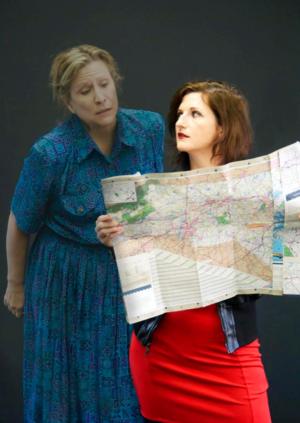 The neurotic and agoraphobic Helen asks that Miranda drive her ashes all the way to San Francisco. Aunt Jack, a drag queen acted by a skillfully understated David Dubov, encourages Miranda to acquiesce to this last request.

So Miranda takes to the road, with the spectral Helen and the corresponding ashes in the passenger’s seat. The pair spend an evening at a rowdy roadside bar, and a foray into the other side where the pair meet a troupe of amnesiac circus performers led by deliciously wacky ringmaster Adam Adkins. These souls are stuck in limbo, paralyzed by fear of the next part of the afterlife, echoing both Helen’s past reclusive life and Miranda’s ambivalence at having to let go of her mother.

While this play is an interesting look into the process of letting go and Spotswood’s talent is obvious, Morning, Miranda falls short of poignancy, probably assisted by the fledgling nature of the production values. Set and lighting design from Chris Holland are perfectly apt, while director Matt Ripa’s spirited ensemble tries to pull together a funny, touching performance. And there are several delightful moments in this show—especially those where David Dubov is allowed to do his thing. Still, it seems that with a little tweaking and a little tightening of the comedic timing, Morning, Miranda should come into its own soon enough.