Theatre Review: ‘Proof’ at the Little Theatre of Alexandria 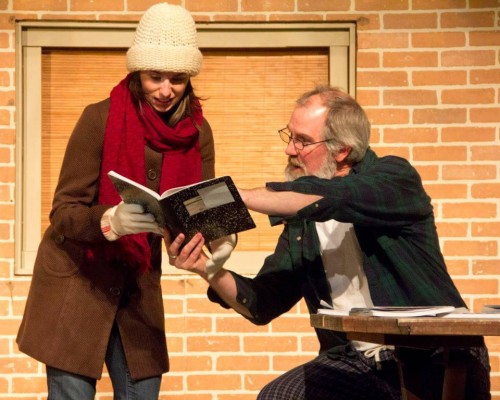 Anna Fagan as Catherine and Chuck Leonard as Robert. Photo by Matt Liptak.

If thoughts of high school calculus make you cringe, and words like quadratic, derivative, and exponential polynomial make your eyes glaze over, fear not.  Advance prep and number 2 pencils are not required to enjoy the bravura performance of Proof, at Little Theatre of Alexandria. The show is an examination of Catherine (Anna Fagan), a young math student, as she deals with a swirl of life issues following the death of her brilliant father who has drifted in and out of mental illness for several years.

David Auburn’s four-character play, which won the Pulitzer Prize in 2001, is completely set on the backyard of a fading, nondescript rambler, which helps set the focus–not on mathematical trappings, but lofty logic in the midst of suburbia and everyday life struggles. In fact, it is more about chemistry than math, and even with several ‘Big Bang Theory’ moments, no mind-numbing equations are foisted on us, save for the math equations piped in before several scenes, effectively hinting at the complexities of this manmade discipline.

Back to Catherine, played by Anna Fagan, who creates an inherently believable woman who is unsettled after her father’s death and is coming out of a dormant state in her life.  She has to face things really quick.  Catherine relinquished her own academic studies in the field to care for Robert, and now is in life-limbo.

The opening scene in this quite well crafted show is of a hapless, slovenly Catherine, chatting with her father Robert, on all things life and sanity and dinner plans, as it is her birthday. Veteran regional actor Chuck Leonard is the celebrated University of Chicago mathematician who parries with her, close to the edge of sanity.  We are jolted into her confused world as we realize that it is a dream, Robert has died and she must deal with life post-dad.

Added to the mix is math grad student Hal, (an ably awed Josh Goldman) one of Robert’s former students, who has been vainly sifting through scores of Robert’s scribbled notebooks to see whether he conceived of anything significant during his lengthy illness. 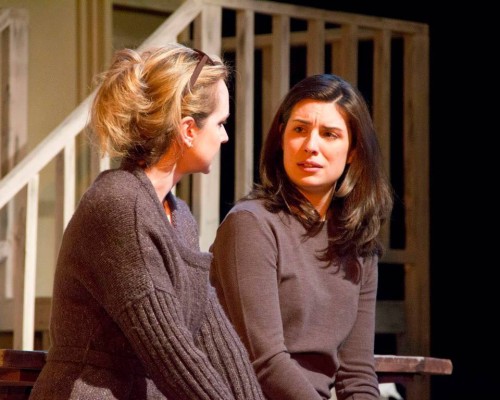 Elizabeth Keith as Claire and Anna Fagan as Catherine. Photo by Matt Liptak.

Robert’s elder daughter, Claire (Elizabeth Keith) who arrives from New York for the funeral, fears that the sadly withdrawn Catherine may have inherited her father’s mental instability, as well as some of his genius, and urges her sister to return with her for therapy. Catherine and Claire are classic sisterly opposites. The New York touting Claire is about schedules and results, with a successful career in ‘functional math’ – statistics and analytics.   Keith’s maddeningly proper attitude has nice cracks of humanity in dealing with a situation with no real answers.

Hal and Catherine soon get romantically involved, in love scenes that are a bit stiff, though overall not terribly bad for math nerds. This adds to the complications, as Catherine shares a special revolutionary ‘Proof’ or mathematical treatise that is locked away in the house. As she says, “I didn’t find the book. I wrote it.” Can Catherine prove the Proof’s authorship? Will the sickness of the father be passed down?

Fagan’s Catherine is believable either vibrant or distraught, as she contends with her violently fluctuating emotions. Her winning turn is the driving force between soap and substance in the show.

Director Susan Devine has remained true to the basic pacing of the show and has created artistic elements in the small touches. Set design and construction by Dan Rimmers made me feel like I was in someone’s backyard.  A shout out to Franklin C. Coleman for lighting design, especially for an effective half backlight during the initial memory scene.

Finally, the insight in describing how to work theoretical problems was a revelation and a credit to both the playwright and the actors. It is described in human tactical terms. Catherine said that her father used to oftentimes take on a math challenge from the side, chipping away from the periphery. And when talking about her work, Catherine says that her mathematical thought process is ‘lumpy’ while her father’s work is ‘elegant.’  There is beauty in details such as these.

Although the play’s conclusion may seem uneventful, what happens beforehand leaves us in awe, as brilliant people contend with their fears, of conformity and–yes–of madness. A must see.