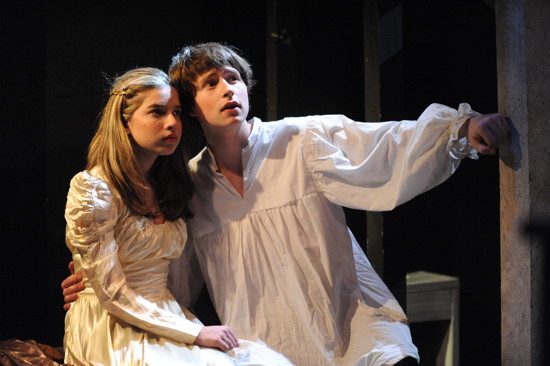 “But, soft! what light through yonder window breaks? It is the east, and Juliet is the sun.” ‘Tis Romeo’s declaration in the infamous balcony scene from William Shakespeare’s Romeo and Juliet, currently in production at Compass Rose Theater in Annapolis, MD.

Eli Pendry plays Romeo and Sydney Maloney plays his beloved Juliet. What is so magnificent about these two young actors is they are age appropriate – Pendry is 17 and Maloney is 14 and their shy, sweet innocence transcends the stage. Their awkwardness grows to deep passion that is balanced with a steady build-up to “O happy dagger! This is thy sheath; there rust, and let me die.”

From the fight scenes to the death scenes and the emotionally charged union of two young loves, Compass Rose Theater’s production of ‘Romeo and Juliet’ is a real winner.

Maloney acts just as a fourteen year old should who is experiencing love for the first time. She is secretive when she discovers she’s fallen for thine enemy and sneaky to consummate her wedding with her Romeo. Juliet is giddy at their wedding as Maloney puts her on cloud nine then is quite dramatic as she brings Juliet back to reality, plotting to reunite with her husband. This Juliet is not fully put together in terms of maturity and eloquence – as is Romeo – and it works.

Pendry is adorable as Romeo; he bumbles through his pursuit of his forbidden love. Like Maloney, Pendry portrays Romeo as a typical teenager in love as he runs the gambit of emotions. Pendry delivers, especially when emotions run high and the anguish is quite apparent. Renata Plecha plays Juliet’s Nurse and brings a hint of Jane Curtain (Saturday Night Live and 3rd Rock from the Sun) to this character with her witty quips and larger-than-life gestures. She is superb as the loyal confidante to her charge, Juliet.

Maggie Robertson is stunning in her role as Lady Capulet, portraying her as a strong woman yet distant as a mother and wife. Just the opposite in personality is Capulet portrayed by Dan Reno who is fierce in this role. His convictions of his daughter’s marital fate are intense, rousing fear in both Juliet and Lady Capulet, for he is determined that Juliet’s betrothed should be Count Paris played by Matt Miller. Miller plays Paris as a traditionalist, quite the opposite of Romeo. Paris is conservative when it comes to love and marriage. He exudes confidence because of his station in society, believing he is worthy of taking Juliet for his wife. Unfortunately, at Juliet’s tomb he is killed by Romeo.

What enhances this production is the casting of four women in male roles, typical of cross-gender casting in Shakespeare’s time. Shaina Higgins plays Benvolio, a true friend to Romeo, a confidant when needed and a reliable person when Romeo has to go into hiding for killing Tybalt. Sydney Knoll as Page is a quiet character that provides pertinent information when needed; whereas Brenna Horner in the role of Escalus, Prince of Verona, is a character of authority with a booming voice. More character opposition, these ladies suitably fulfilled their respective roles. 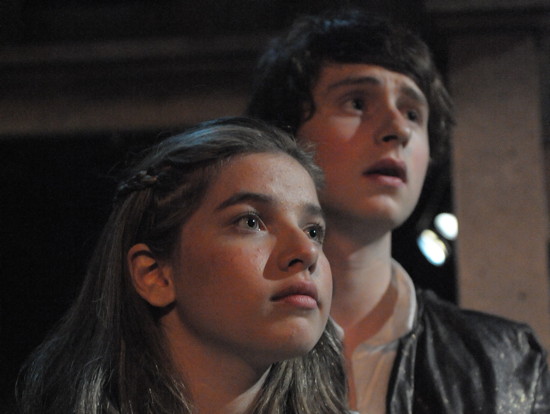 Enough cannot be said about Emily Kaye Lynn in the role of Mercutio. Mesmerizing with her quick reiteration of Shakespeare’s prose, Lynn is a tour de force. Unfortunately, Mercutio dies too soon. Thomas Hessenauer is terrific in the role of Friar Lawrence. A friend to Romeo and Juliet, Hessenauer mixes kindness with a hint of frantic, yet is always plan-ready. He secretly marries Romeo and Juliet, hoping that their union will bring peace between the Montagues and Capulets, which demonstrates he is a man of hope and faith. Kyle Lynch fills dual roles as both Montague and Friar John. For the most part, he plays these characters as passive but in the end, when he enters into a truce with Capulet, he does shine. Michael Robinson plays Tybalt, Lady Capulet’s nephew, who is truly a hot-head and loathes the Montagues with deep passion and his sword. Ironically, he is rather arrogant. Casey Baum as Romeo’s servant, Balthasar stays close but is helpful and informative when needed. Baum keeps Balthasar in his place, as it was probably meant to be in this time period.

Romeo and Juliet is produced and directed by Lucinda Merry-Browne with technical support from Mary Ruth Cowgill as Stage Manager. Julie Bays as Costume Designer keeps it simple, which in the small stage space works for this production. There is good use of rich, deep colors like purple, turquoise, and gold. But the real treat is Juliet’s satin white wedding gown – a true depiction of Juliet’s purity. Megan Lang as Lighting Designer clearly delineates night from day, good from bad, and joy from sorrow, using deep colors for the more foreboding scenes. Amy Kellet as Scenic Painter repurposed the set from previous productions. Kudos to the Fight Director, Casey Kaleba; it is well choreographed when one hears the clashing to the swords against each other and yet there is no real bloodshed.

From the fight scenes to the death scenes and the emotionally charged union of two young loves, Compass Rose Theater’s production of Romeo and Juliet is a real winner. It’s appropriate for teens on up and is by far, still a timeless classic.