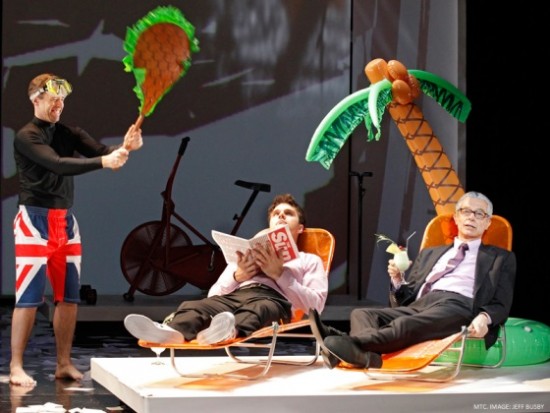 We also love our families and friends.  We love connecting with other human beings, getting to know people, their likes and dislikes.  We love to engage in those activities with people that deepen our bonds and make the world a better place.

… the show’s delightful fusion of fact and fiction would make Fox News proud.

Sometimes it is hard to imagine a person who does not share that seemingly so basic a drive.  In fact, we do not want to imagine that there are people who do not share a desire to strengthen community and family.  We say: Do people exist for whom life’s central purpose is not love and belonging, but the acquisition of greater and greater control over the earth and its wealth, its means of communication, its zeitgeist?

Well, Rupert is just such a person, and he is now on display on the Eisenhower stage at the Kennedy Center’s International Theatre Festival.

The Melbourne Theatre Company production of David Williamson’s Rupert is making its US premiere this week, and it is a show that the politically minded do not want to miss.  A spirited romp through the life of one Rupert Murdoch, former Australian citizen, turned US citizen, media mogul, friend of Ronald Reagan and Maggie Thatcher, advisor to world leaders and bankers, and creator of Fox Broadcasting Company, the show entertains as much as it terrifies with its bubbling combination of myth and reality.

In fact, the show’s delightful fusion of fact and fiction would make Fox News proud.  By the end, we do not care what is true and what is false: all we know is that our lives as free citizens in something resembling a democratic society are in serious jeopardy. 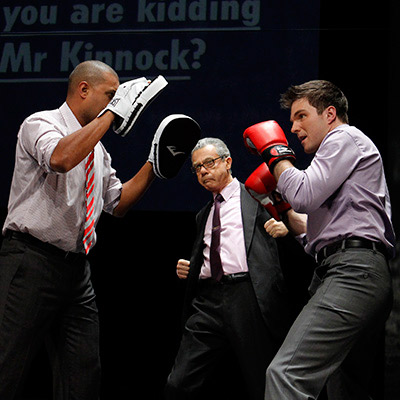 David Williamson’s decision to reveal Murdoch’s story using Murdoch’s own journalistic style is what makes Rupert such a wonderful evening.  In a politically minded Washington, DC, where awareness of spin and culture war sits on the tip of our tongue like a cold sore, any serious depiction of the “real” Rupert would have blown up on stage like so much pomp and circumstance.

Using satire, farce, an amazing variety of high tech / low tech theatrics, and the occasional burst of dramatic heat, director Lee Lewis keeps the audience on edge: we never know what’s coming next.  For those who read the program notes, we know that there will be no singing; but, for those who didn’t peek, we’re certain that a Broadway style chorus line awaits at the next light change.

Sean O’Shea plays the “old” Rupert, and as soon as he steps on stage with his slight limp and swaying step we recognize him, not as the rarely seen and little known Rupert Murdoch, but rather as the cagey old uncle who is probably up to no good.  O’Shea’s Rupert is delightfully pleasant and engaging, a charming Mr. Magoo, capable of not only stealing your wallet but slicing your skin off in the process, and doing it all for the greater good, or I should say for the Rupert’s good.

Early on, “old” Rupert introduces us to “young” Rupert, a way too handsome Guy Edmonds.  As “old” Rupert explains, however: it’s his show and if he wants a far too good looking younger self, that’s what he as casting director will do.

Mr. Edmonds commands the stage with assurance and style.  In fact, even as the story’s Rupert grows older–into his 60s older–the “old” Rupert commands Mr. Edmonds to play on, preferring the viral younger man as his “brand” more than the comical Mr. Magoo.

A six-actor ensemble join the two Ruperts: their versatility is stellar and the theatrics couldn’t be more fantastic.

Marg Downey plays several characters, from Rupert’s daughter Elizabeth to his mother Elizabeth, the only real terror in Rupert’s life; but her turn as the crusty Margaret Thatcher highlights her performance.

Simon Gleeson portrays James Murdoch, Rupert’s younger son and the Murdoch at the center of News Corps’ legal troubles in England.  Gleeson’s characterization of a sniveling Tony Blair, however, as he courts the then all powerful Murdoch has left a lasting impression in my brain.

HaiHa Le plays Rupert’s third wife, Wendi Deng, as well as his first child Prudence.  Ms. Le’s Wendi exudes flirtatiousness and sex-appeal, and it’s easy to understand why she would be able to make the old Murdoch forget his desire for world conquest long enough to go to a dance club.

Rounding out the ensemble are Scott Sheridan, Bert LaBonté, and Daniela Farinacci.  Each plays a host of characters in a host of styles, from the famous–LaBonté’s Roger Ailes is a gem–to the not so famous–Anna Torv, Rupert’s second wife.  Ms. Farinacci’s portrayal of the loving, and increasingly concerned wife of 31 years is one of the more touching character’s in the production. Scott Sheridan, on the other hand, demonstrates his enormous versatility, playing with precision 16 different people.

Director Lewis has put together an excellent production team.  Stephen Curtis, who handles sets, costumes, and the AV design, has created a flexible scenographic world that is perfect forRupert.  Composer Kelly Ryall has added a fantastic score and choreographer Andrew Hallsworth–yes, there is dancing–has created a Hollywood number that will surely leave you laughing.

Now, it can definitely said that the direction of the world portrayed in Rupert is no laughing matter.  If we criticize Nero for fiddling while Rome burned, then we should criticize ourselves for laughing while the world sinks in a swamp.  For the rich are getting richer–hell, they aren’t just getting richer, they are getting filthy rich and Rupert Murdoch and his ideologically expressive narcissism has played no small part in the transformation.

And we should be ashamed of ourselves for going to the theatre and laughing about the destruction of the middle class and hard working people who make life better for everyone each and every day.

But at least now, the next time we hear that all so popular phrase “job creator,” we will think of Rupert’s Fox News and say: “If after thirty plus years of giving these d**n “job creators” everything they want, we still don’t have that many jobs, and the jobs we have are for low pay and more work, maybe its time we fire those suckers and get somebody in there who can do the job!”

But, then again, maybe as in Aristophanes’s famous anti-war play Lysistrata, it is better just to keep laughing as the empire crumbles into debt and ruin and endless war.

Running Time: 2 hours and 40 minutes with one intermission.

For information about other shows in the KennedyCenter’s International Theatre Festival, playing from March 11 through March 30, click here.