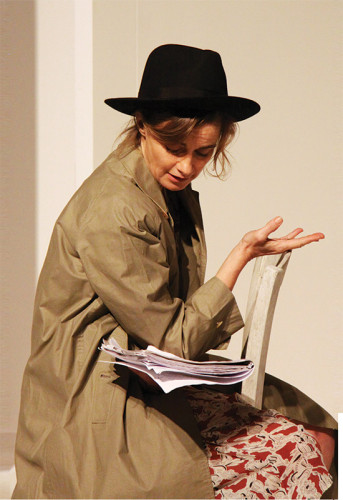 Marguerite Duras’s play Savannah Bay follows a young woman desperate to discover the truth about her mother’s suicide the day after her birth.

Writer Marguerite Duras, best known for her hauntingly beautiful, and scandalous The Lover, is known for her poetic memoryscapes.  Her worlds are filled with a fusion of fact and illusion, fragmented remembrances and half-heard tales.

Any attempt on a reader’s part to try to untangle her stories, fact from fiction, will only end in dismay.  The smart reader will surrender to her voice, the way a swimmer might surrender to a siren luring her to her death.

Directed with an aesthetic, poignant eye by Didier Bezace and starring Geneviève Mnich and Anne Consigny, Savannah Bay offers the audience not so much a story as a fragment, beautifully radiant and evocative but dominated more by illusion than truth.

…resonates with the fragility of the human connection and the anguish of isolation.

Ms. Mnich plays the mother of a young woman who committed suicide the day after giving birth.  She did not witness the birth (or the suicide), as she was apparently too involved in her acting career to attend her daughter’s arrival into motherhood.

Now in her latter years, she seems traumatized by her daughter’s death; she can only dream of acting again.

Ms. Consigny plays the young woman who comes to visit the aging actress.  Fittingly, the actress does not know who she is: as the play progresses through its poetic mixture of sea mythologies and mystical spirits and mythic unions, she gradually comes to discover that this young woman is the grandchild she never met.

Ms. Mnich’s grandmother and grande dame of the stage is awash in story, real and imagined.  In fact, she is not of the world: rather, she is of legend and myth.  Ms. Mnich’s character is haunted by a memory that she cannot imagine; or rather by a memory that she is forced to imagine because she was not present when her daughter threw herself into the sea.  Her character’s stillness is powerful; her deep ache, palpable.  Her longing and loss anchors the production.

Ms. Consigny’s character is full of grace, a grace that is defined by a pain that she cannot express.  She attends to her grandmother’s memory the way a daughter might attend to her mother.  Ironically, however, all she knows of her mother she gains through the grandmother.

The two actress play off of one another beautifully, and their final embrace exudes the healing power of their mutual love.

The scenography by set designer Jean Haas and lighting designer Dominique Fortine is reminiscent of Edward Hopper with its dominating pristine white surfaces, its elongated lines and shadows, its crevices like openings and its slices of interior, all bathed in shards of crisp light.

Costumes by Cidalia da Costa were simple and timeless.

Savannah Bay offers Washington audiences a chance to experience one of the 20th century’s master writers.  Marguerite Duras’s play does not unfold dramatically as much as lyrically, taking us into the heart of this intimate space between two women.  Performed in a hushed and lyric French, with excerpts of bittersweet songs included, the production resonates with the fragility of the human connection and the anguish of isolation.  Particularly moving for mothers and daughters, grandmothers and granddaughters everywhere.

Advisory: in French with English subtitles