The cast of Spring Awakening. Photo by Stan Barouh.

And once again, we witness the ever-tragic consequences that happen in a society of repressed sexuality.  Only this time, the controversial themes being brought to light on the contemporary stage have been more than a century within public reach.  Based on German Frank Wedekind’s radically precocious Frülings Erwachen, translating to Spring Awakening (written in 1891), the modern day musical adaptation of Spring Awakening explores themes of adolescent sexual exploration, homosexuality, sadomasochism, suicide, and abortion.  Funny, how a century of art manages go around on only slight variations of thematic discussions.

Presented by University of Maryland’s Theatre Dance Performance Studies, this presentation of the musical Spring Awakening is a vivid and engaging collaboration between the performing arts.  Below stage level, a live orchestra, conducted by William Yanesh, plays the original, 90’s-style rock n’ roll score, while onstage–on a versatile and ominously beautiful set designed by Ruthmarie Tenorio–a combination of singers, dancers, and actors bounce off one another, both physically and metaphorically.

…this show is worth seeing

Directed in tandem by theatre design expert Brian MacDevitt and choreographers Sara Pearson and Patrik Widrig, the show is multi-faceted and layered with dynamic sequences.   Most notable was the directors’ incorporation of a group deemed the “Elementals.”  A troupe of raggedly dressed and sullen-faced modern dancers, the Elementals were present on stage during several musical numbers as a representation of the raw and rampant undertones occurring internally in our everyday life.   Used as sensual dance partners of the cast in “Touch Me” or inanimate tombstones in “Left Behind,” they brought a unique aesthetic when compared to that of a commonplace musical.

Set in a small German village in the late 19th century, the culture of sexual repression is introduced immediately: during the scene young Fraulein Wendla, played elegantly by Megan Morse Jans, begs her mother for an accurate explanation of human reproduction, singing a folksy “Mama Who Bore Me.”  To this her traditional and uptight mother, played by Sara Thompson, divulges only that babies are made when a woman, “loves her husband with all her….heart.”  Needless to say, this explanation doesn’t end well.

Soon the audience is taken full-throttle into a world of gender segregated and rigidly disciplined schools, where young adolescents are isolated not only from each other, but from their hormone-amplified emotions and burgeoning sexuality.   We meet the bright and anti-authoritarian Mechior Gabor, played by Zac Brightbill, whose valor becomes instantly evident as he stands up during school for his less assertive comrade Moritz Stiefel, played by Daniel Smeriglio.  The scene’s rock ballad, “The B**** of Living,” sung by the boys and their dapperly dressed companions, also impressively displays the directors’ use of modern dance choreography that was employed throughout the show. 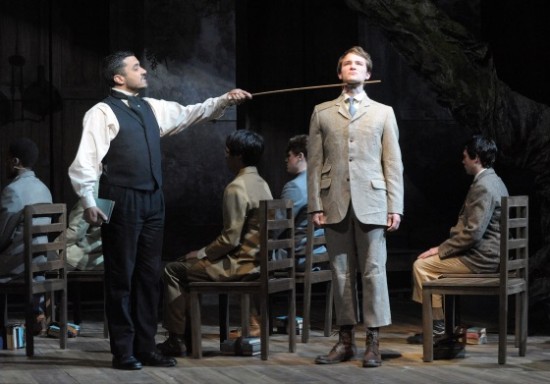 However, with its enchanting score and stimulating choreography at the forefront of the performance objectives, it must be said that the quality of the individual’s performances became tertiary.  Whether it was a due to over-collaboration between departments or simply the nature of musical theatre as a whole, that lack of believable character development caused the show to feel like a disjointed goody-bag of confusing sexual circumstances and unexpressed self-hatreds.

In “The Dark I Know Well” we learn of two young girls, Marta and Ilse, played by Natalie Carlyle and Jenay McNeil, and their contrasting experiences with sexually abusive fathers. Unfortunately, this is later on scarcely referenced.  A confused and tearful sadomasochistic experiment with a tree branch leads ironically to romance between naïve Wendla and well-cultivated Melchior, oddly without further discussion.  Meanwhile the tormented Moritz develops an inconsolable self-loathing, realized in the exquisite duet “Blue Wind/Don’t Do Sadness,” with the now escaped bohemian Ilse.  Without discrediting the weight of these issues, the sequencing of scenes and interactions between characters on stage failed to rouse the amount of empathy that one might find is appropriate when seeing young people confront these matters in real life.

Yet, it is impossible to watch this century-old story without commending it for the strange honesty in which it addresses each of these still relevant themes.   Coming from a culture that values its sexual liberation and freedom of expression, it is particularly jarring to realize that the intrinsic shame of natural emotions and sexual preferences, which plague Spring Awakening’s 19th century characters, are today still a topic of social controversy.

Audiences can still relate to the metaphorical “bruise” of futile love as sung in “The Word of Your Body,” and to the unyielding pressure felt by young boys to be nothing less than successful, impassive men, such as in the pressure that pushes Moritz to his death.

Depressing themes and disjointed plot line aside, this show is worth seeing if not only for the well-executed collaboration between the arts and the unabashedly catchy tunes, but also for inspiring the question we’ve all been avoiding: “How much have things really changed?”

Running Time: 2 hours and 15 minutes, with one 15-minute intermission.

Advisory: Adult themes and some language.

Spring Awakening will run February 28 – March 8, 2014, at the Clarice Smith Performing Arts Center at the University of Maryland. For tickets and information please visit here.