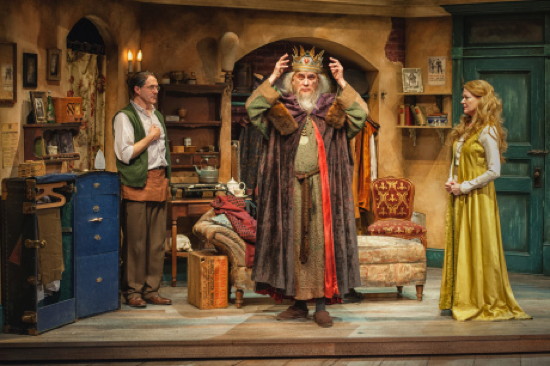 This stellar season at the Everyman continues with its brilliant production of The Dresser directed by Derek Goldman. The play was written and produced for the London and Broadway stages in the early 1980s by Ronald Harwood. Harwood also wrote the screenplay for the highly acclaimed 1983 film adaptation starring Tom Courtenay and Albert Finney. This is Harwood’s heartbreaking and humorous homage to a bygone era in British theater taken from his own experiences as a dresser to Sir Donald Wolfit.

Beginning in the 18th Century, companies were run by actor-managers who brought primarily the works of Shakespeare to provinces all over England – often under less than ideal conditions. No circumstances could be more difficult than those during World War II, with threats of air raids and able-bodied actors off fighting in the war.

Everyman offers up another spellbinding evening of theater in this beautifully produced presentation of ‘The Dresser.’

The Dresser is a backstage look at the relationship between the egotistical, aging actor, Sir – traveling the countryside with his rag tag company of players – and his devoted dresser, Norman. Norman is much more than a dresser. He is the actor’s confidant, cheering section, gatekeeper, and man Friday. He cajoles, comforts, and nurses while making sure Sir has the correct costume, wig and makeup for each evening’s performance, which changes constantly.

The actor is in the twilight of his life, trying to write his autobiography and treading water in a stormy sea of emotions and deteriorating health. This particular evening’s production is King Lear but there are doubts the performance will go on. Norman has just left Sir in hospital after a public breakdown from apparent exhaustion. 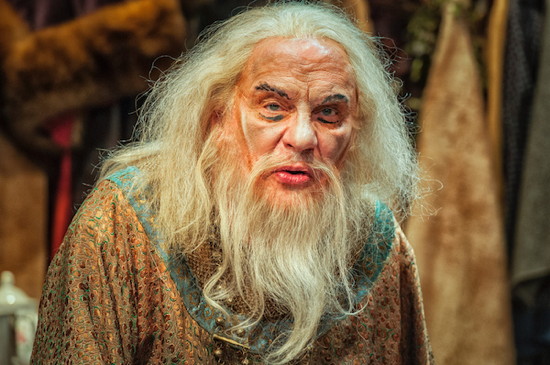 Sir escapes and returns to his dressing room completely disoriented. Norman uses every trick in an arsenal developed over the 16 years working for the actor with touching and comic results.  Everyman’s seasoned resident members Carl Schurr as Sir and Bruce Randolph Nelson as Norman completely embody these characters, heart and soul. We watch an intricate ballet between these two amazing actors as the two prepare and ultimately pull off Sir’s 227th performance as Lear – even during a bombing raid. But there is a price to be paid by both, so intertwined are their lives.

Though the focus is on the marvelous interplay of the two main characters, all of the supporting players shine as well. Deborah Hazlett portrays her Ladyship in a subtle, nuanced role as Sir’s long suffering wife and leading lady. Megan Anderson is perfect as Madge, the no-nonsense stage manager who has also been with the company for many years. Though she appears to be all business and efficiency, she has a soft core. Emily Vere Nicoll plays Irene beautifully – the classic young and starry-eyed actress wannabe who predictably becomes the object of an older man’s last grasp at youth – literally.

Carl Schurr as Sir and Deborah Hazlett as Her Ladyship. Photo by ClintonBPhotography.

Wil Love as Geoffrey Thorton has a delightful comic turn as Lear’s Fool, forced to wear a costume made for a much smaller, and younger, actor while being instructed by Sir himself not to block his spotlight and to find his own light. James Whalen as Mr. Oxenby, sporting a bum leg from a war injury, is an otherwise healthy but disagreeable actor in the company – a man of few words but effective in adding to the humor. The competent ensemble of James Bunzil, Will Cooke, Benjamin Lovell and Frank Tesoro Vince rounds out the cast.

Another star of this play is the work of the production team. The set design by James Fouchard and props by Jillian Matthews are breathtaking. The brick walls that frame each side of the stage boast oversized recruitment posters. No detail is spared in Sir’s dressing room, which slides out for the majority of the scenes and disappears to create the backstage of the provincial theater. The bits of King Lear performed to move the plot along ingeniously put the audience as observers in the wings. Sound designer Chad Marsh sets the mood opening with BBC war broadcasts and the sound effects are so realistic, it truly feels as if you are sitting in a theater during an air raid. Costume designer Julie Potter has the opportunity to display her craft in both the period pieces of the World War II era as well as the costumes for Lear.

Everyman offers up another spellbinding evening of theater in this beautifully produced presentation of The Dresser.

Running Time: 2 hours and 20 minutes, with one 25-minute intermission.