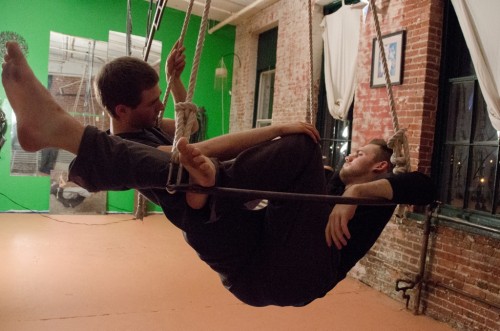 Alec Weinberg and Nick Horan in “Grieving and Sequins.” Photo by Zachary Handler.

It was an ambitious undertaking for the Iron Crow Theater Company’s founder and artistic director Steven J. Satta to create a production inspired by the works of Edgar Allan Poe and present them through a “queer lens,” as he put it.  The offbeat 19th century author, poet and critic who died in Baltimore from a host of possible causes, would seem like a good fit for this Baltimore-based community theatre company whose plays generally center on issues relating to the lesbian, gay, bisexual and transgender community and are characterized by atypical, thought-provoking scripts with a good dose of sexuality immersed in the topics.

“Iron Crow has always had a very big definition of ‘queer’ – to include expression that skews or re-invents things in a dramatic way that connects to gender or sexual themes,” Mr. Satta told me prior to the opening of The Homo Poe Show at the Theatre Project.  “I think that Poe is already more than halfway towards this definition of ‘queer’.  His take on the world is so idiosyncratic and unexpected (twisted, in some cases) that he created his own genre of literature.  He deals often with obsession and lost love, which, while it is not explicitly sexual in his stories, is an easy path into the territories of gender and sexual desire.”

Mr. Satta summoned up several playwrights who had previously helped give Iron Crow its edgy persona and strung together seven short pieces—a mixture of individual mini-plays and some aerial dance performances—in an attempt to present Poe’s works through this “queer” lens.  Mr. Satta also wrote one of the pieces and, along with Ryan Clark, directed the production.   As Poe’s efforts over the years met with mixed results, so, too, did The Homo Poe Show.

On the positive side, the directors are to be commended for their innovative artistry and visual uniqueness of having performers “off the ground” in several pieces to create a different dimension for viewing.  And for the most part, the actors turned in very good performances portraying a number of absorbing characters.

By design, the individual vignettes have no relationship to each other besides the references to Poe’s works.  The different playwrights offered their own interpretations of Poe’s writings to craft their scripts.  Given that Poe’s body of work covered a broad landscape, the writers appropriately focused on several of Poe’s more popular themes: madness, death, sexuality, and the otherworld.  But one would have to be rather familiar with Poe to recognize the references throughout these plays with many of them, perhaps, too subtle for a general audience.

“Super-Hot Raven,” directed by Ryan Clark and written by Megan Gogerty who had penned the humorous Bad Panda for Iron Crow, stood out as one of the best because of its more obvious connections to Poe’s endeavors, specifically The Raven.   Two lesbians meet as a result of one woman, “Raven”, wearing a Baltimore Ravens shirt (played by Madeline Hicks), repairing a radiator in the apartment of Poet (Meggie Twible) who is fretting over the break-up of her lover Lenore.  This hit the mark because it was laced throughout with references to Poe’s poem The Raven and that both actors performed proficiently in this well-done story.

On the other hand, the two solo aerial choreography pieces created and performed by In-Flight Theater’s Mara Neimanis, does not obviously connect to Poe, at least not from my perspective.  The show’s opening, “I Dreamed of Poe,” has Ms. Neimanis swinging back and forth on a cable and kicking off the rear backdrop to music.  Perhaps it was a reference to Poe’s Pit and the Pendulum, but it wasn’t clear.  Her other piece that opens the second act, “Points of Grief” whereby she swings from an arrow-shaped apparatus is also vague in its connection, though the movements are interesting and dramatic.  Ms. Neimanis also choreographs the other aerial performances in the show.

“Thomas,” a play written by Daniel Talbott who also wrote the excellent play Slipping for Iron Crow, is the second piece in the line-up.  It was inspired by Poe’s short story Eleanora that focuses on madness, sexuality and the loss of a loved one—a young cousin similar to Poe’s own story.  Directed by Steven Satta, the acting that is mostly in the form of a monologue by Nick Horan is outstanding.  Demonstrating his acting skills and ability to adapt, he seamlessly overcame mic troubles on the evening the show was reviewed.  Jon Dallas and Alec Weinberg also performed nicely in supporting roles.

“The Trick” by Rich Espey, a three-time Baltimore Playwrights Festival winner and directed by Ryan Clark, also shines.  Inspired by Poe’s The Cask of Amontillado and other works, Espey shows how an aging gay man who is obsessed with his deceased boyfriend Timothy and his eyes in particular, confronts the inevitability of time.  What makes this piece work effectively besides the solid acting of Sean Elias as the central character Billy, Jon Dallas who plays multiple characters and Jenna Russman as “Time” and who performs well in aerial choreography, is its humorous connection to how contemporary gay men feel about aging and the use of social media to pursue a “trick.”  Billy’s efforts to stop “Time” also takes an amusing turn.

In the two-person dance piece “Did You Mark Me Well?” that is choreographed by Tony Byrd and performed superbly by Mr. Byrd and Alec Weinberg, there is no direct connection to a particular Poe story but instead explores obsessive relationships, a theme appearing in several of Poe’s works.  The well-coordinated dancing was alternately graceful and dramatic, sensual and aggressive.   It is one of the highlights of the show.

Saving the best for last is “Grieving and Sequins” that Mr. Satta wrote and directed.  This was the first time Iron Crow used an ensemble process to create the play.  All members of the previous pieces are used in this work that again, does not link to a specific Poe story.  The theme of death, evident in many of Poe’s macabre works, is central to this play and is pulled off with success.

All the elements of the previous pieces including effective aerial work are woven together in “Grieving and Sequins”, which explores how a young man who has lost his lover to an unspecified infectious disease shuts himself off from the outside world while a ghost representing the path to death enters.  Clearly, this is the most poignant piece in the show and is the best executed.  Mr. Horan and Mr. Weinberg stand out, but the rest of the ensemble excels as well.

Sound designer Nick Hood does a fine job of providing a multitude of sound effects, and the lighting by Alec Lawson and Kendra Richard is also effective.

The stage has no scenery to speak of and a few props, including the aerial devices, are used depending on the piece.  I would have liked to have seen the name of each play with the playwright/director projected on the blank rear wall to usher in each play rather than leaving it to the program that can’t be read in the darkened auditorium.  It would add a sense of connectivity to the show.

Though some components work better than others, The Homo Poe Show is a bold effort that relies on strong writing and acting and a little inspiration from a literary icon doesn’t hurt either.  It is a unique theatrical experience that is interesting enough to check out.

Advisory:  The Homo Poe Show contains nudity, adult language and themes and is not recommended for children.