The cast of ‘The Wedding Singer.’ Photo provided by Port Tobacco Players.

Ah, the life of a wedding singer…When you think about it, it kind of sounds like a great job. Everyone around you is happy, people are dancing as you belt out tunes and love is in the air. But, what do you do when you are humiliated by being ditched at the aisle at your own nuptials, knowing your profession requires you to continue spreading joy for other newlyweds? Such is the dilemma of poor Robby Hart, played with dire angst by Erich Engel, making his Port Tobacco Players debut in The Wedding Singer.

Robby’s own pathetic anthem “Somebody Kill Me!” about sums it up for this poor guy, who might have to give up his band after his sleazy rocker fiancé, Linda (Kimberly Cease) decides that wedding singer does not equal rock star in this hilarious musical comedy with music by Matthew Sklar, lyrics by Chad Beguelin and book by Chad Beguelin and Tim Herlihy. The play is based on the 1998 film starring Adam Sandler.

After Linda leaves Robby, he just about abandons all hope to salvage any kind of happiness, or his music career. But, then again, there is still “the band.” Rounding out the trio is Sammy (Michael J. Margelos) on guitar and effeminate George (Quentin Nash Sagers) on keyboard. These two are about as lost in life as Robby. Sammy continues to chase the affections of ex-girlfriend/waitress Holly (Tara Waters) and George marches out of the closet to the beat of his own drum. Much of their shenanigans bring down the house with some hilarious moments. 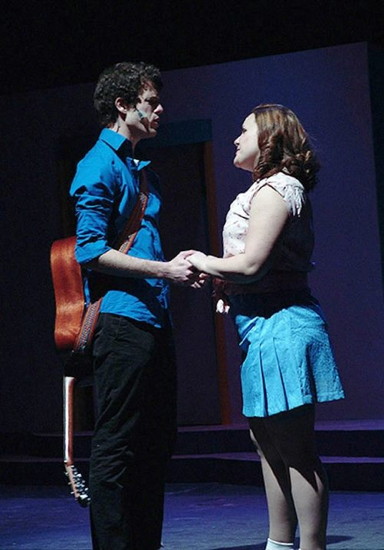 OK, so “the band” actually isn’t enough to pull Robby out of the slumps. Even his hip grandma, Rosie’s (Amy Statz Dolan) words of wisdom can’t get him out of bed. But, then there’s this one girl, Julia (Becky Kuhn) just a friend, mind you…After all, he did just agree to sing at HER wedding if she got engaged, which she did just as Robby got dumped. Julia seems to be able to get to Robby and make him smile again. She convinces Robby to help her plan her wedding since he has some recent, first hand knowledge on the subject. And, somewhere a long the way, in between picking out china patterns and “the dress”, there has to be a final decision on an appropriate church kiss, which is kind of hard to do without seeing it. So, amid some prodding from Holly, a mock kiss is performed by Julia and stand-in Robby. And, yeah, it was a curl your toes wow kiss. Makes you want to experience your own “church tongue.” Yes, you read that right!

From there, things get complicated. Love brews and is put on the back burner by both Robby and Julia who know they are falling for each other but have no idea what to do about it. To make matters worse, Julia’s self-absorbed fiancé, Glen (Patrick Pruitt) is in Julia’s mother’s (Theresa Coffey) words, “Rich, good-looking, RICH.” How exactly does Robby even have a chance to win over a possible material girl in a very material word? Well, of course he goes about it all wrong at first. Every great love story must have conflict, those that struggle, like every mutant wedding guest at table 9 (in my favorite ensemble bit “Casualty of Love,” which was laugh out loud funny!). The journey through the obstacle course is what makes the finish line so sweet, right?

And, in the end, love prevails. Otherwise, this would be a tragedy instead of a comedy. The only tragedy would be missing this great cast that includes a couple of local teachers that I find awesome – still out there acting, encouraging our youth to follow their dreams. Lead, Becky Kuhn (Julia), who teaches chorus at Piccowaxen Middle School and ensemble actress, Tessa N. Silvestro, who teaches theatre at St. Mary Ryken High School were incredible mentors up there. And, it was nice to see talented teen, Emmeline Jones, whom I directed years ago, onstage more than holding her own in the ensemble. In fact, her attack on Robby Hart, after destroying her wedding reception, was hilarious.

In speaking to several of the cast members after the show, I discovered that they all contributed to a “80s playlist” that was played by the cast to get into 80s character, and it clearly worked. Some of them even used some TV characters to find their mannerisms. Kenneth L. Waters, Jr. claimed he fashioned his “bartender” after Isaac from The Love Boat, while Patrick Pruitt’s jerk, Glen, got some inspiration from a character from Futurama. 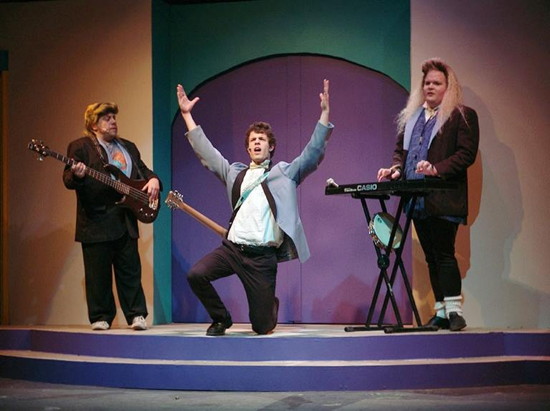 All in all, it’s a fun show. The cast is clearly having fun onstage and enjoying each other. They were all-stars and I must include the rest of the cast along with my favorite bits they performed so you will understand the charm and the laughter when you see it: Katie Bolt (Bridesmaid), Draper Carter (George Dance Double), Amy Wathen Cooksey (Angie), Monica Eller (Bridesmaid), Taylor Scott Hines (Drunk and Billy Idol Impersonator), Courtney Knichel (Bride), AnnaBelle Lowe (Bridesmaid), Brian Merritt (Bad Haircut Guy), Liz Mildenstein (Cyndi Lauper impersonator), Bridgette Pressley (Tina Turner impersonator), Benjamin Simpson (Rosie Dance Double), Kenneth L. Waters, Jr. (Groom and Mr. T impersonator) and Rick Wathen (Father and Ronald Reagan impersonator). They all put on a fine performance, worthy of mention.

Kudos also goes to Director/Choreographer, Brooke L. Howells for her vision, putting together such a talented cast and bringing the 80s back. And finally, a fine job was done by the live orchestra that accompanied the show.

Advisory: Parental guidance suggested for this show – there is adult language and content.