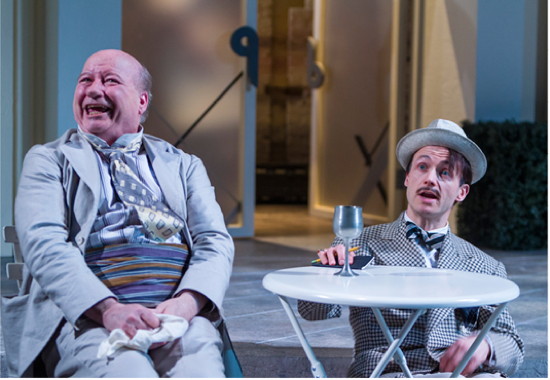 Center Stage’s production of Twelfth Night, directed by Gavin Witt, celebrates one of Shakespeare’s best comedies by focusing on the humor that drips from the text.  And Centerstage’s Night wrings out every drop, even with a story that is constructed from the pain of loss, and loving someone just out of reach.

Twelfth Night is the story of brother and sister twins whose ship sinks during an ocean storm, and the sister, Viola, washes up on the beaches of Illyria thinking her brother, Sebastian, has drowned.  With no personal possessions left and in a strange land, she decides to dress as a man and join the service of Illyria’s Duke Orsino.  She quickly finds out two things; one, the Duke is in love with Countess Olivia, and two, Viola is herself in love with the Duke.  Add to the mixture a fool, a drunken cousin and Knight, a self-righteous Puritan and Viola’s rescued twin brother, and Shakespeare creates the ultimate comedy.

Center Stage hits the bulls-eye with Brian Reddy as the drunken cousin of the Countess Olivia, Sir Toby Belch.  He has perfect comedic timing and is a convincing drunk.  One of the best things about Reddy’s Belch is that, even through his “drunkenness,” I could understand every work he said – a rare find in an actor already speaking Shakespearean English! 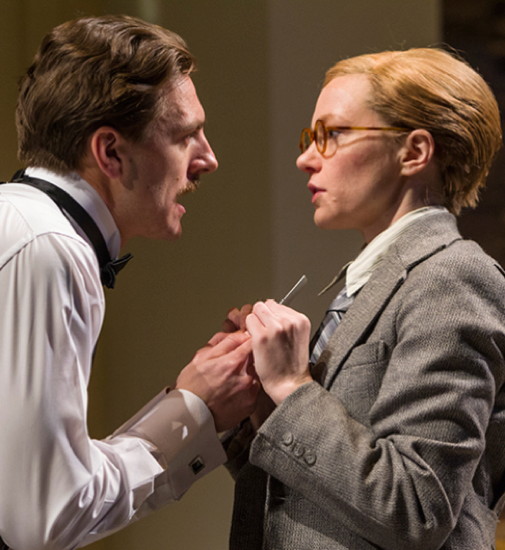 Vanessa Wasche, as Countess Olivia, was wonderfully over-the-top as a wealthy woman channeling Norma Desmond.  Julie-Ann Elliot as Maria, handmaid to Olivia, played a naughty and nice character with perfect balance.  William Connell as Duke Orsino, was great as a “manly man” who thought he knew what he wanted and is completely surprised about the strange attraction building between him and his young service “man” (the disguised Viola). Richard Hollis as Sir Andrew — one word: hysterical!

Caroline Hewitt and Buddy Haardt are both sweet as in their non-funny (straight men) roles surrounded by a group of hilarious characters.  [Who do they play?]  Linda Kimbrough, as Feste the Fool, held her own in a role usually reserved for men.  Ryan McCurdy, as Valentine and as many other characters, was fun to watch, especially his many ways of reacting to his changing roles and situations.  Jon Hudson Odom as Antonio is wonderfully strong and handsome as a brave sailor wanted for crimes in Illyria.  Allen McCullough as Malvolio is, well — two words: brilliant and hysterical!

The production team is top-notch.  David Burdick’s costumes are perfect for the late-1930s setting of Centerstage’s production.  The Countess’s (many) gowns were flowing and extremely well designed and constructed.  Josh Epstein’s set is bright and functional.  The only thing that distracted me from the show was that, at times, the set pieces were moved on stage while the actors were still speaking. 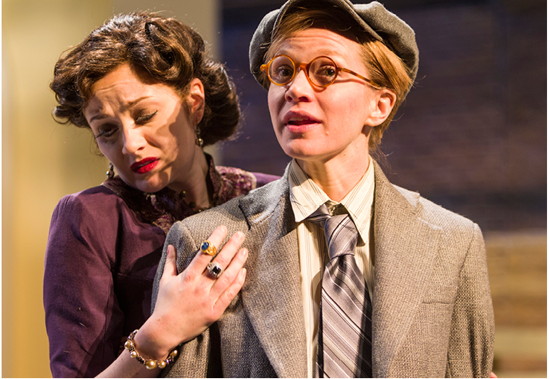 Vanessa Wasche as Olivia and Caroline Hewitt as Viola. Photo by Richard Anderson.

I’ve seen Twelfth Night many, many times.  It is my favorite Shakespeare comedy, and I have noticed that some directors tend to play up the more tragic aspects of this play.  There are a few such moments, but Center Stage let their production be the comedy I always think it should be – impassioned, playful and fun.

Running Time: Approximately 2 hours and 30 minutes, with one intermission.