Theatre Review: ‘Water by the Spoonful’ at Studio Theatre 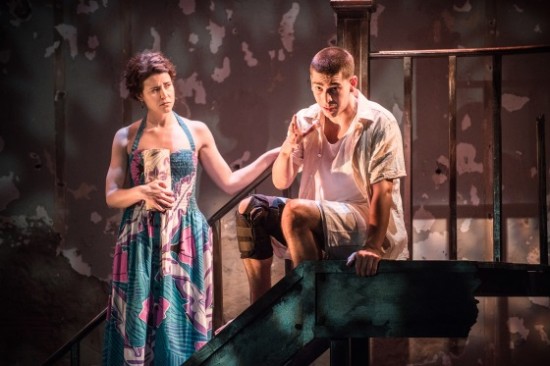 The “spoonful” symbolizes both the innocence of childhood and the sinister swirl of drug addictions. Think Mary Poppins’ merry “Spoonful of Sugar,” or Willie Dixon’s bleak blues, “Spoonful.”

No wonder the play won the Pulitzer Prize for drama in 2012.

In Quiara Alegeía Hudes’ Water by the Spoonful,  currently at the Studio Theatre, the title refers to both a methodical home treatment for children to fight dehydration, but also a failure to administer it because of the scourge of drug addiction. The addiction in this case is not from the dark, spoon-fired heroin, but the equally crippling addition of crack cocaine. 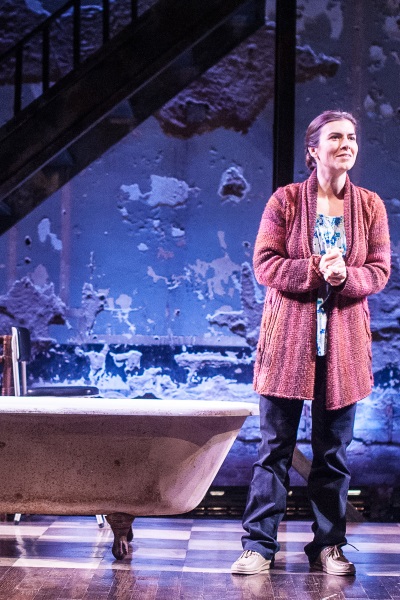 Water by the Spoonful  is the second of a trilogy that began with Elliot, a Soldier’s Fugue that was staged by the GALA Hispanic Theatre in 2007, and ends with The Happiest Song Plays Last, currently playing Second Stage Theatre in New York.

The societal cataclysm of drug addiction is scarcely glimpsed on stage. In Water by the Spoonful, it underlies the action of two parallel stories: a Marine haunted by his time in Iraq hooked on painkillers, and that of his biological mother, a recovering crack addict who runs a narcotics anonymous website.

In both stories, connections is an underlying theme; while drug connections ironically are plentiful, any human connection with family and with other people are much more difficult to make and to maintain.

In the case of Elliot Ortiz, the veteran who makes his living in Philadelphia as a low wage sandwich maker at Subway, his lone family connection is his cousin, Yazmin, who dreamt of playing free jazz but instead teaches it locally.

His mother, we learn only halfway through the play, is the struggling former crack addict who administers an internet chat room for fellow recovering addicts. As Haikumom, she offers a poem a day to the site that attracts regulars known to each other through their screen names. Chutes & Ladders is an older IRS bureaucrat estranged from his son; Orangutan an adventurous young woman who flies to Japan to check out her homeland. They all pounce on a rich suburban newbie on the site who can afford his addiction but is more embarrassed by it, since it made him crash his Porsche.

As widespread as it is, the internet culture usually isn’t reflected any better in theater than drugs are, and director KJ Sanchez, working with set designer Dan Conway and lighting designer Michael Giannitti, does a good job depicting it on stage — with avatars of the screen names projected on a post when the characters log and off (indicated also through chimes from sound designers Chrstopher Baine).

It would seem that internet chatter would differ from everyday conversation, but Sanchez does a good job having the actors blend the two. Although they don’t physically interact, or are unable to clink glasses in a sober toast, they converse with verve and passion that doesn’t require going into shorthand, acronyms or emoticons.

What brings it to life, of course, is a very strong cast. Gabriela Fernandez-Coffey comes off as loving and motherly — to the unknown internet family she coddles and censors — but is hiding her own deep sorrow and pain. One couldn’t imagine other people than Vincent J. Brown or Amy Kim Waschke in their roles as longtime online friends Chutes & Ladders and Orangutan, who both toy with brave acts that deal with actual human connection.

Tim Getman is convincing, too, as the rich guy addict who must peel away his own lies before he is determined to change. 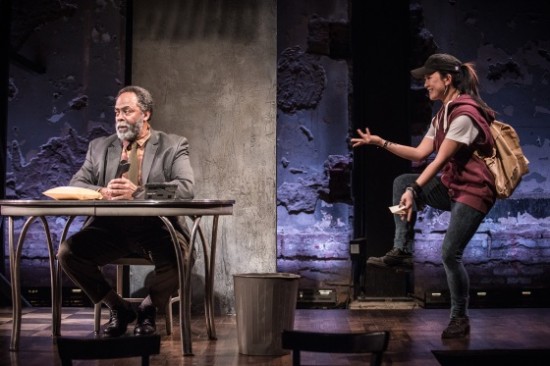 As Elliott, Auturo Soria can barely be contained on the stage, he’s so full of rage and pain and fear. He does his job so well, you expect to see his name as he tackles bigger stages and roles very soon. He almost eclipses Gisela Chípe, though, as his cousin, who almost seems too waif-like to be heavily influenced by John Coltrane, as she claims. But she eventually finds a comfortable direction as she tries to heal her drug-ravaged family.

Water by the Spoonful is just the kind of thing great theater is supposed to do: Shine a light on human conditions that people are often all too willing to ignore, even as it suggests at its end a ray of light and possibility amid the darkness.

No wonder the play won the Pulitzer Prize for drama in 2012.