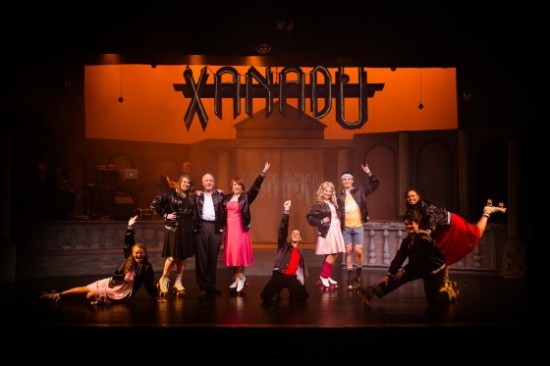 Xanadu rolls into the Reston Community Center this month as a cheeky time capsule of one of my favorite decades… the 80s. 1980 to be precise. Big hair, spandex, phones with wires on them, and glitter. Artistically, it was a time of experimentation and wild special effects. There was a ‘why not’ disposition when the movie was made—and flamed out. The musical fared better, leaning on the admittedly enjoyable singalong score, produced from Australian music icon Olivia Newton-John’s hits and other rock songs of the era.

…if you enjoy a brief throwback in time and timely songs, with those manipulative melodies, there’s ‘Xanadu’ for you.

Cobbling together a plo, we find a group of muses (I learned they travel in packs for the dance numbers) bouncing around and landing on Venice Beach, the ultra cool happenin place, in hopes of passing artistic inspiration to a mortal. Evie Korovesis is ingénue and ringleader Clio, who changes her name to Kira, which is markedly different, just to fit in as a mortal. She adopts an Aussie accent in a nice nod to Newton-John and befriends a lovable lummox named Sonny (Russell Silber) an artist just hanging on the boardwalk. Their duet “Suddenly” is performed with her rollerskating and him hanging out of a telephone booth.  It was a nice moment of camp and their voices were pleasant.

Sonny is played as a California dude with heavy NY accent. Get the feeling this thing is all over the place? Hey, it’s the 80s. We learn he has a vision and a heart of gold. Silber showed a nice sense of timing on his comic lines, donned in headband, cutoff jeans and white socks with stripes. Costuming by  Kathy Dunlop was bright and sparkly, especially later in the Mt.Olympus scene where Clio is recalled after she heartbreakingly leaves her subject and she pleads her cases. Dancing Medusas, Centaurs and Ogres are always welcome. And a chance to ask Zeus “Have You Ever Been Mellow?” 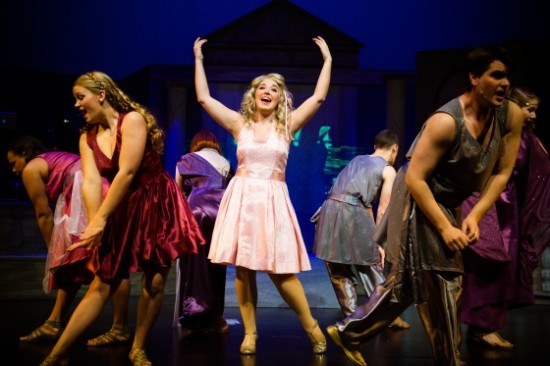 There is internal muse jealosy of Clio, and several of them are plotting to interfere with Sonny and Kira’s plans to create Xanadu, all seems lost until love shines through at the end.

Korovesis brings a nice charm to the role and had cheeky fun with a nice tonal quality.

Emily Jonas playing the muse Calliope was a revelation. She added a myriad of goofy facial expressions and sharp facial and body movement as the scheming muse and stole many scenes. Her duo with Katie Cheek  of “Evil Woman” was sharply choreographed and a highlight of the show. Her Yiddish Aphrodite in another character was notable. Sadly the other chorus characters, given room to explore, were fairly bland. Danny the  entrepreneur who once met Clio years before (Richard Durkin) played grouchy and reflective well.

The dance numbers are entwined into the show in an airy way reminiscent of a muse floating on the air. We are treated to a nice tap dance by and more imaginative movement later in the show. But sharper offset moments onstage would have helped.

Directed by Joshua Redford, he balanced many different art forms to give us this visual treat. I would have liked to have seen more focused moments in a relatively short show. Musical Direction by Matt Jeffrey was nicely understated by a 4 piece band, but the voices didn’t consistently fill the void. But if you enjoy a brief throwback in time and timely songs that bring you back to that carefree time of your youth, with those manipulative melodies, there’s Xanadu for you.

Xanadu is presented by the Reston Community Players at 2310 Colts Neck Reston, VA  from March 7-29 2014. For tickets to this or other performances, call the information line at 703 476-4500 or contact them online.