Most of the theatre-going audience in the United States has a high level of privilege and, thus, little understanding of the life of the dispossessed, life under the yoke of racial oppression, or life under the strangle of economic deprivation. Most of us do, however, no matter what our birth or economic circumstances know what it is like to rage with jealousy or bear the burden of unacknowledged shame or suffer from a lack of forgiveness.  The initial offering of the Kennedy Center’s 2014 International Theater Festival is The Suit, a profoundly simple, beautiful story about love, infidelity, apartheid, and the need for reconciliation.  Robert Michael Oliver

Synopsis: When Philomen, a middle-class lawyer, catches his wife Matilda having an affair, he forces her to treat her lover’s left-behind suit as an honored guest–feeding it, entertaining it, and taking it for walks as a constant reminder of her adultery. But the setting of Sophiatown, a teeming South African township that was erased under apartheid soon after Can Themba wrote his classic short story The Suit, is as much a character in the story as his unfortunate couple. Renowned director Peter Brook’s French stage adaptation is now given new life by returning to the source language of English. Working with his long-time collaborator Marie-Hélène Estienne and composer Franck Krawczyk, they have adapted the play and set it to music from sources as diverse as Franz Schubert and Miriam Makeba. Brook and Estienne’s work was last seen at the Kennedy Center in Samuel Beckett’s Fragments in 2011. 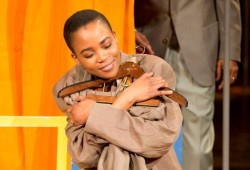 2. ‘The Dresser’ at Everyman Theatre

This stellar season at the Everyman continues with its brilliant production of The Dresser directed by Derek Goldman. The play was written and produced for the London and Broadway stages in the early 1980s by Ronald Harwood. Harwood also wrote the screenplay for the highly acclaimed 1983 film adaptation starring Tom Courtenay and Albert Finney. This is Harwood’s heartbreaking and humorous homage to a bygone era in British theater taken from his own experiences as a dresser to Sir Donald Wolfit. Lynne Menefee

Synopsis: Both hilarious and heartbreaking, The Dresser is a backstage tale of life upon the wicked stage and the power that theatre has to lift the human spirit in times of great strife. As Britain is under attack from German aircraft, a group of traveling, ragtag Shakespearean players tours the English countryside performing the Bard’s tragic masterpiece – King Lear. Sir is the last of the great actors of a generation that has since passed. As he prepares to play his 227th performance as Lear, he suddenly realizes he cannot recall his first line. It is only his dedicated and loyal dresser, Norman, who would do anything to help lift his master, that can bring the once-great actor to the stage for a final curtain call. 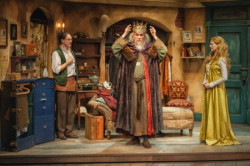 Dark Passages by Shannon Michal Dow, Jan Henson Dow and Robert Schroeder is a slice of life from any given news headline. In production at Bowie Community Theatre at White Marsh Park, Dark Passages is a true whodunit to the very end. Every male character is suspect and for a minute, it seems that one of the female characters is just as guilty. Danielle Angeline

Synopsis: Mark and Bret’s little college town used to be a great place, but not anymore. Women have been attacked in the area, and Bret is terrified that her missing best friends are the latest victims. Mark is more worried that Bret is cheating on him. Bret’s creepy landlord is watching their relationship implode through a mirror in her apartment, unbeknownst to them both. When a detective with a colorful past arrives in town to investigate the disappearances, this little whodunit twists and turns its way to a scary conclusion. 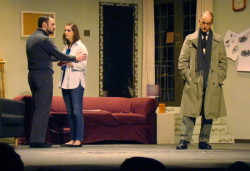 The year is 1951 and Little Bertie  (Brooklyn Shuck) is lost on a beach in Atlantic City, NJ.  Looking for help to find her mother, she walks up to another little girl her age and says, “I’m lost and I’m scared.”  Comforting her, Little Cee Cee (Presley Ryan) reassuringly says, “You ain’t lost.  I found ya!”  And so begins the story about a lifelong friendship between two females in a world premiere musical called Beaches which is making quite a splash at the Signature Theatre in Arlington, VA.  Mark Beachy

Synopsis: Based on the beloved book, Beaches follows two extraordinary friends through 30 years of camaraderie, laughter and sorrow. Vivacious, outlandish Cee Cee and beautiful, privileged Bertie meet as children and become fast friends. From pen-pals to roommates to romantic rivals, Cee Cee and Bertie’s oil-and-water friendship perseveres through even the most tragic trials. With a touching vulnerability, Beaches exemplifies the triumph of the human spirit and the bonds of sisterhood. 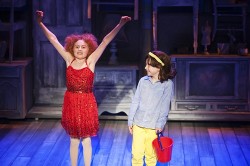 If you have ever wondered what your lover was thinking as he watched you getting ready for bed from across the room, or as he massaged your back with ever growing passion and sounds of animal intensity, then Molotov Theatre Group’s Normal, now playing at the District of Columbia Arts Center, is the show for you.  Robert Michael Oliver

Synopsis: “Normal,” by Anthony Neilson, is the true-life story of Peter Kurten, the “Dusseldorf Ripper” of the 1920s and 1930s. This vaudevillian fever dream and disturbing love triangle is told from the point of view of the attorney who represented Kurten in the trial that ended his horrific crime spree. Kurten’s life is said to be the inspiration for Fritz Lang’s movie “M.” 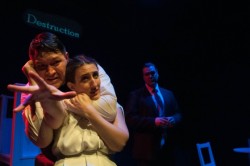