When Hair first came to Washington in 1971, a dead downtown burst into life.  The anti-war counterculture was at its height, hungering for recognition by mainstream America, hankering to become mainstream America. Hair’s integrated cast, its rock/blues/African rhythms, its drug-laced, sex-laced, profanity-laced lyrics, and of course its flash of flesh and dissonant imagery were what so many DC theatre-goers had waited for (for more than three years). Robert Michael Oliver.

Synopsis: An anti-war group of “hippies” has taken over a building in New York City.  One member, a smart young “English” lad named Claude (played authentically by Paul Scanlan) has been drafted.  He must decided if he will refuse to serve and burn his draft card, as other members of the tribe have done, or if he will keep his options for a “moneyed” American future open. 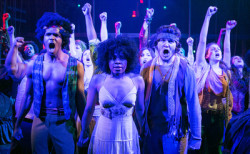 “But, soft! what light through yonder window breaks? It is the east, and Juliet is the sun.” ‘Tis Romeo’s declaration in the infamous balcony scene from William Shakespeare’s Romeo and Juliet, currently in production at Compass Rose Theater in Annapolis, MD. Danielle Angeline

Synopsis: Romeo and Juliet fall in love, but their families hate each other.  It is a tragedy. 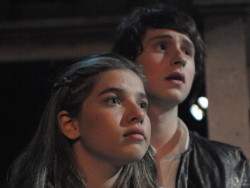 Ah, the life of a wedding singer…When you think about it, it kind of sounds like a great job. Everyone around you is happy, people are dancing as you belt out tunes and love is in the air. But, what do you do when you are humiliated by being ditched at the aisle at your own nuptials, knowing your profession requires you to continue spreading joy for other newlyweds? Such is the dilemma of poor Robby Hart, played with dire angst by Erich Engel, making his Port Tobacco Players debut in The Wedding Singer.  Regan Cashman

Synopsis: It’s 1985 and rock-star wannabe Robbie Hart is New Jersey’s favorite wedding singer. He’s the life of the party, until his own fiancée leaves him at the altar. Shot through the heart, Robbie makes every wedding as disastrous as his own. Enter Julia, a winsome waitress who wins his affection. As luck would have it, Julia is about to be married to a Wall Street shark, and unless Robbie can pull off the performance of a decade, the girl of his dreams will be gone forever. 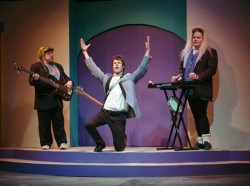 Synopsis: A pair of young lovers creates a fantastical, often violent, world through an interweaving dialogue of increasing perplexity. At the heart of their fantasies lies an unimaginable tragedy that both bonds and breaks the two. Fused with raw energy, the couple blurs the distinction of truth and illusion in this battle-of-the-sexes wild ride. 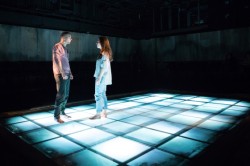 5. ‘Morning, Miranda’ by Doorway Arts Ensemble at The Writer’s Center

Ever wondered what it would be like to talk to your parents after they’re dead?  Or worse, have them continue to nag and question you and your life choices excessively from the other side? Add some drag queens, a collectively confused circus troupe, and a stack of postcards from your heretofore-unheard-of father, and you’ve got Stephen Spotswood’s Morning, Miranda.  Anna Brinley

Synopsis: Miranda has spent her life a virtual prisoner of her mother’s agoraphobia. After her mother, Helen’s, sudden death, she thinks she’s finally free to move on with her own life. That is, until she’s tasked with taking Helen’s ashes across the country. And she learns that the ghost of her mother will be joining her on the journey. The reluctant companions embark on a roadtrip that will take them from a smoky DC drag show to a raucous country roadhouse to the land of the dead itself, where a traveling circus of restless spirits threatens to make Miranda one of their number. As the journey spirals out of control, Miranda has to decide whether to risk her own life and sanity to fulfill her mother’s last wishes, or abandon Helen to the realm of the dead. 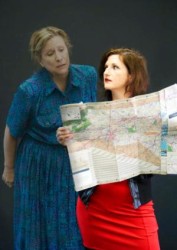