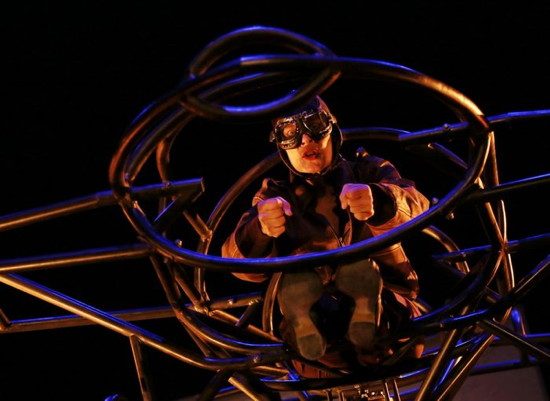 Mara Neimanis has truly taken In-Flight Theater to a new level in her production of Air Heart. Written by Neimanis, and performed by her on a spectacular metal sculpture of a plane made by Lara Scults and Tim Scofield, Air Heart takes us back to a time when the sky no longer became the limit.

Set against the backdrop map of Amelia Earhart’s ambitious (and ultimately disastrous) flight around the world, Air Heart tells the story of a woman determined to keep moving, get by on her own merits, and stay in the air. Earhart, played with emotion, integrity, and unfailing grace by Neimanis, is far more interested in personal fulfillment and that of women in her stifled 1930s society than the status quo and her own family.

…Mara Neimanis has brought the famous aviatrix to life once more in this thrilling, fascinating, and beautiful production.

We watch her deteriorate amidst flashing lights, paparazzi questions, and endless lectures, until her journey finally ends in the South Pacific, frantically calling the Itasca. Her final moments, the breathless “we are circling” fading in the darkness, are moving in their simplicity and absolute realism. 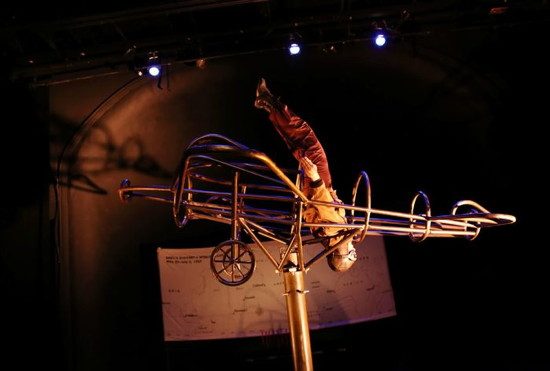 “The thrill of flight,” Amelia says, “comes wrapped in the fact that you can fall,” and the same might be said of live theatre, especially of the kind Mara Neimanis practices. Her grace and mobility is remarkable, even when simulating being bounced around a cockpit in anticipation of a plane crash. She appears to pull herself up into the plane, hang from it, climb around it, with as little effort as it takes to watch her do so—framed by scattered bird feathers, she might as well be one.

Amelia Earhart’s 1937 disappearance in the South Pacific, en route to Howland Island, is an enduring mystery. She remains a figure frozen in time, but Mara Neimanis has brought the famous aviatrix to life once more in this thrilling, fascinating, and beautiful production.

Air Heart runs through May 4, 2014 with In-Flight Theater at The Baltimore Theatre Project, 45 West Preston Street in Baltimore, MD. For tickets click here.