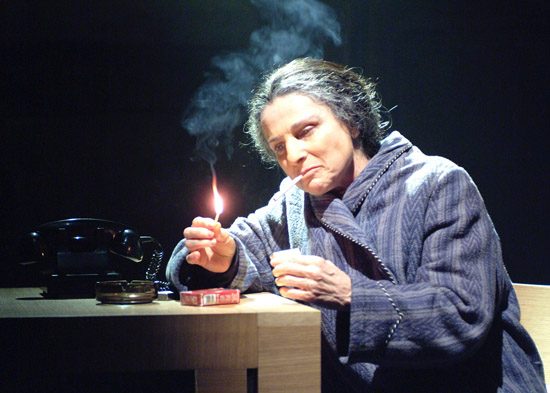 An earnest prayer for Yom Kippur, the Jewish Day of Atonement, beautifully sung.

Lights up on an old woman, Golda Meir, the former Prime Minister of Israel now in retirement, shuffling in a drab blue bathrobe and reaching—not for the last time—for her cigarettes.

This is how the remarkable journey of Golda’s Balcony begins.

It’s hard to find the right words to describe just how revelatory and brilliant a performance we have here. Tovah Feldshuh’s carefully-researched, fully-realized embodiment of one of Israel’s most controversial founders is a wonder to behold. Looking nothing like she does in real life (Feldshuh is more the glamorous Kathryn Hepburn type offstage), we follow Golda’s ramblings as she shifts back and forth in time, recounting her vulnerable childhood in Kiev, and her many struggles with family, friends and political allies alike. Feldshuh sheds Golda’s years with ease to become a child, a passionate adolescent, young wife, mother, statesperson, only to return to a present of old age, decline, and illness. That she embodies the men in Golda’s life and career is also a joy. The discipline required to pull off the many changes here is tremendous, and a lesson in acting for anyone who wants to learn how it’s really done.

Tovah Feldshuh’s carefully-researched, fully-realized embodiment of one of Israel’s most controversial founders is a wonder to behold.

In consultation with Anna Louizos, the setting is spare and, given the sweep of Golda’s story, multi-functional. A central table stands in for home and cabinet, while a pedestal serves as a place of honor for cherished memories as well as a place of regret. A small set of stairs downstage serves nicely for the stump speeches that inspired her, and which she herself would give in time. But one of the more amusing aspects of the production is the sound design. Alex Hawthorn has found a way to illustrate Golda Meir’s story that alternately supports her narrative and irritates her beyond reason. A snippet from J.S. Bach’s Cello Suites, for example, symbolizes the presence of Golda’s long-suffering husband, Morris Meyerson, and is sometimes too painful (or annoying, or both) for Golda to handle.

The narrative shifts gracefully, for the most part, back and forth in time and is augmented by a series of projections created by the team of Batwin and Robin. Although generally effective, there are times when the images descend into the cartoonish—all the more regrettable, because the cartoon images appear at what is otherwise a signal, climactic moment in the action.

William Gibson’s script uses the Yom Kippur War as the play’s framing device, and with good reason. Dramatists thrive on moments of crisis – moments when a person’s character is revealed. Meir’s response to the Yom Kippur War has to qualify as the most dramatic imaginable. Hollywood can’t touch this, it’s just too real. Imagine a survivor of the Russian pogroms, raised in America (hence Meir’s surprisingly familiar accent), who moves to Palestine a committed Zionist. She witnesses the Holocaust from afar, fighting desperately for the rights of refugees—children especially—to join her in a new nation of Israel that she helps to make a reality. Now imagine this idealist suddenly faced with the prospect of personal and national annihilation. In the midst of horrifying, escalating losses, Meir is left with a military option of truly biblical proportions. Truth be known, Gibson does not know what really happened, but the account given here makes perfect sense given what we now know of Israel’s nuclear program and of the major players involved – the Arab armies allied against Israel; the Soviet Union which provided them with their weapons; and of course, Richard Nixon and Henry Kissinger. Let’s just say that these leaders didn’t exactly cover themselves in glory during this crisis. As horrifying as Kissinger’s duplicity may be, Feldshuh’s impersonation is spot-on. 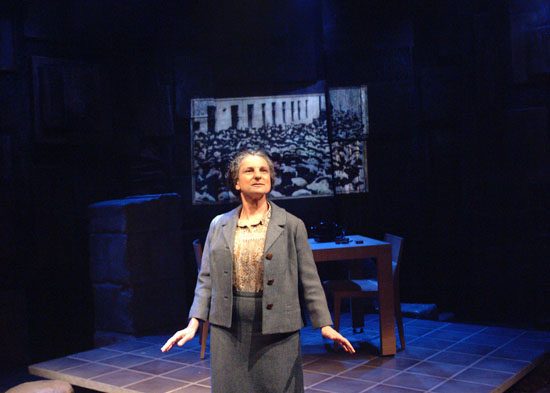 For those familiar with the mainstream, conservative version of Israel’s history, Golda’s Balcony will be a compelling performance reinforcing their position. Apparently, Meir enjoys only a mixed reputation in Israel. Feldshuh is of the impression that Golda is that nation’s equivalent of Nixon (or, given the impact of 9/11 here, I might add George W. Bush). It is only fair that her admirers hold the stage for a while, to pay their respects and give her side of the story.

The risk of Gibson’s script, however, is that in its pursuit of the dramatic and sympathetic, the play falls just this side of hagiography. It’s understandable that Gibson didn’t want to complicate matters too much; to give a full picture would have made better history, but worse drama. Still in the interests of fairness, I must point out that Palestinian audiences will vividly recall a quote attributed to Meir in the American press, allegedly denying the existence of the Palestinian people. [Fact check: Meir disputed the quote, and at any rate, “Palestine” was simply the Roman way of pronouncing “Philistine.” The Roman province’s political name was changed from “Judea” to “Palestine” after the Jewish Revolts of the first century CE. In effect this has made all peoples who lived in the region for the past 2,000 years Palestinians, including ethnic Philistines.]

You may well ask, “Why go into that mess, in the middle of a glowing review?” My answer:  because the context for this production, unfortunately, demands it. Under the courageous direction of Ari Roth, Theater J has been committed for many years to open doors and a wide diversity of perspectives on the history of the Holy Land. The reason for this is simple, and noble; only through dialogue and listening to each other’s histories can adversaries come to an understanding and, ultimately, a lasting peace. This to me is what theater is for, what theater is best at—not entertainment, but thoughtful engagement of the most important issues that face us.

This year, the “Voices from a Changing Middle East Festival” has focused on “Questions of Nation Building,” events surrounding modern Israel’s War of Independence. And once again Roth has taken a tremendous amount of heat from local conservatives, who—tragically, in my opinion—feel threatened by evidence that the war may have had a dark chapter or two. Never mind that all wars, however noble the cause, have their dark chapters. Roth has endured attacks too hideous to repeat here and was forced to curtail the first production of the festival, Israeli playwright Motti Lerner’s The Admission. It is a sad commentary on the state of the First Amendment that an Israeli does not have the freedom to tell his own story to an American audience, and share the questions he has about his own nation’s history—questions that many Israelis have, but which remain largely unknown to us.

The good news is that after viewing Feldshuh’s brilliant performance, and after steeping yourself in Gold Meir’s vision of Israel’s history, you will still be able to see a response from a younger generation of Israeli artists who share her commitment to peace, but who believe it must proceed along very different lines. Lerner’s The Admission, a co-production with Israel’s Cameri Theatre and the Arab-Hebrew Theatre of Jaffa, will soon find a new home at Studio Theatre starting April 30th.  I highly recommend that all who see Golda’s Balcony take an evening out to see another aspect to this multi-faceted nation’s history.

Running Time: One hour and 45 minutes.