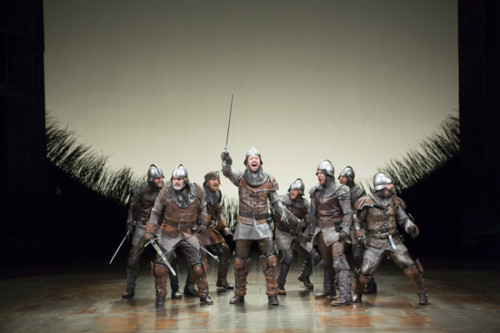 John Keabler as Hotspur, Steve Pickering as Worcester, and the cast in the Shakespeare Theatre Company production of Henry IV, Part 1, directed by Michael Kahn. Photo by Scott Suchman.

The Wars of the Roses were a time of extreme turmoil in Britain. In 1399, Henry of Bolingbroke, grandson of Edward III, deposed his cousin Richard II and took the throne for himself as Henry IV, displacing Richard’s heir Mortimer and upsetting quite a few loyal aristocrats. During Henry IV’s reign, his place as king was threatened by no fewer than three major rebellions, two of which are beautifully and devastatingly depicted in the Shakespeare Theatre Company’s productions of William Shakespeare’s Henry IV, Part I and Henry IV, Part II.

These plays tap into the human condition, and to bear witness to them, done so well and with such passion, is a rare opportunity.

“Uneasy lies the head that wears the crown,” notes Henry IV (Edward Gero) and this is the dominant factor in the events of these plays. In Part I, Henry must contend with the Welsh rebellion of Owen Glendower (Ted van Griethuysen) and his son-in-law, Edmund Mortimer (Aaron Gaines), and the Northumberland rebellion of Mortimer’s brother-in-law, Henry “Hotspur” Percy (John Keabler), who feels slighted on behalf of his father (Kevin McGuire). Nearer to home, Henry’s son and heir, Prince Hal (Matthew Amendt), spends most of his time whoring, drinking, and stealing in the company of degenerates like Sir John Falstaff (Stacy Keach). Things come to a head at the Battle of Shrewsbury, where Hal and Hotspur face off in single combat, Henry IV defeats a Scottish madman (Rhett Henckel), and Falstaff plays dead until he can survive unscathed and claim victory. 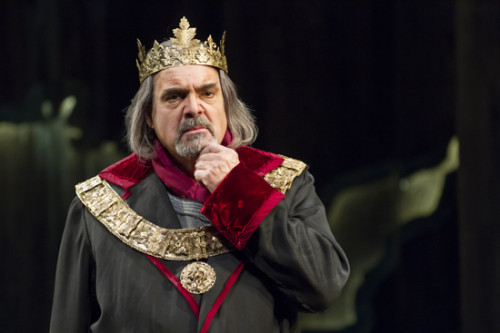 Henry IV, Part II follows immediately after the Battle of Shrewsbury and the death of Hotspur. Hotspur’s companions plan for another rebellion; Hal, temporarily redeemed by his heroics at Shrewsbury, is back to his old ways. The dying King Henry fears for the future of his kingdom at the hands of his wayward son. Meanwhile, Falstaff lives off the rumors of his own heroics and attempts to avoid returning to battle under Hal’s brother, John of Lancaster (Patrick Valli). The rebels are routed, but King Henry collapses. Lying near death, he and Hal must reconcile in order to leave the kingdom in good hands.

As the titles suggest, Part I and Part II are really two sections of the same play – a narrative of Henry IV’s reign and the ascension of his son as war hero Henry V.  Director Michael Kahn has truly taken this to heart in this production, using the same cast and set for both productions. The benefit of using the same cast is that the character growth from Part I and Part II carries through five hours, in total, of theatre. Both plays begin with the extraordinary, sinister silhouette of Britain, backlit on the far wall of the stage; a telling detail, for it is the fight for England’s future that dominates these plays. Scene transitions are perfectly smooth, though the mechanical nature–beds and tables disappearing into the floor, walls moving outward, doors appearing from nowhere–can be a little disconcerting at first. But the sheer versatility of this set, turning it into a tavern, a battlefield, or a royal hall, serves as a more than adequate backdrop to some phenomenal storytelling.

One of the primary draws of Henry IV is the humor of John Falstaff, and Stacy Keach inhabits this character perfectly, at turns mincing and stumbling about the stage. His comedic performances are a breath of fresh air after the powerful rage of Hotspur and the brooding presence of King Henry. And his rapport with Hal lends a legitimacy to their friendship that could easily have been otherwise. 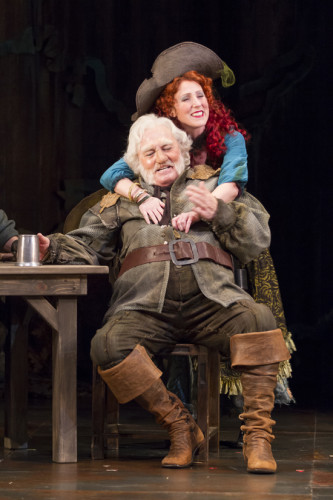 Keach’s presence in this production is of course one of the major attractions, but Shakespeare plays are, ultimately, ensemble productions. The journey Hal undergoes from the prodigal son to the glorious king is fascinating to watch, and Matthew Amendt shows us every moment of that journey. Our first impression of Hal is of him leaving a whore’s bedside, in his long underwear, carrying his pants. Our final is of him in full royal regalia, banishing John Falstaff from his presence. He struggles with the responsibility that comes with donning the crown that, in essence, has murdered his father – a struggle that takes him from childish pleasures to deep-seated grief at the realities of kingship. In the Battle of Shrewsbury and at the end of Part II, we see glimpses of the hero Hal will become, far removed from his early days of revelry.

The contrast between Hal’s ready ease and Hotspur’s tension is stark, spurred (no pun intended) by Keabler’s fantastic intensity–every moment is driven by rage, indignation, and care. The entire first play is structured around this dichotomy, the two young Henrys are foils for each other, moving towards the climactic duel at Shrewsbury where Hotspur’s ill-fated rebellion finally ends–but not before he earns Hal’s respect.

As Henry IV, Gero commands attention in every scene in which he appears. Especially near the end, he is the picture of a man struggling with the specter of his past, and an account of his life, haunted by the murder of his cousin–literally haunted by the voice of the late Richard II, delivered in voice over in his final moments.

The works of William Shakespeare are widely read in classrooms, but they really shine on stage–especially when spoken by a competent and emotive cast. The Shakespeare Theatre Company has done an amazing job on this production, bringing to life a story that, while set hundreds of years in the past, is so relevant to the world in which we live. These plays tap into the human condition, and to bear witness to them, done so well and with such passion, is a rare opportunity. I wholeheartedly recommend seeing both parts of Henry IV.

Running Time: 2 hours 30 minutes each, with one fifteen-minute intermission.