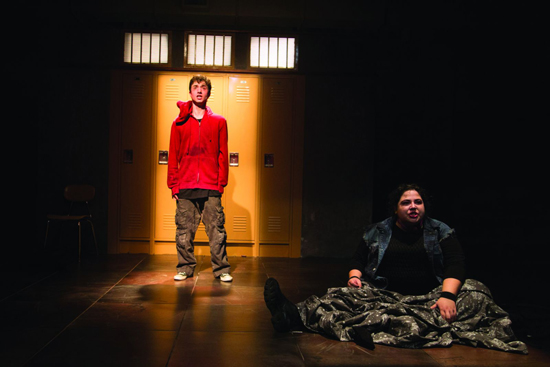 One of the realizations from the brash, surreal play Moth, by Melbourne’s Declan Greene, is that teenagers are pretty much the same in Australia as they are in America – for better or worse.

At the edges of the public school cafeteria are kids like Sebastian and Claryssa – relentlessly taunted by others, ignored by parents, disdainful of others, clinging to one another as if in a loser’s default, and shielding themselves in cultish pursuits from anime to Goth.

As the U.S. premiere at Studio Theatre begins, Claryssa is asleep, seemingly on the tiles of the school floor. Sebastian emerges from a locker where he has either been previously stashed by bullies or dozing as a right-side-up bat. It turns out they’re not really at school but because the horrors of high school dominate their lives, the play is set in that environment. However, Colin K. Bills’ lighting and James Bigbee Garver’s sound design create other scenes as the two tell  their story.

It will be interesting to see how young people in particular will respond to the immediacy of the acting and production.

It is in the telling of their story – with each actor lapsing into other characters or critiquing the narrative – where their disturbing tale emerges. That makes it a challenge for Tom Story, the longtime local-actor-turned-first-time-director. But he is aided mightily by a couple of great young actors. David Nate Goldman is terrific as Sebastian, the exuberant, annoying, damaged kid who finds a dark purpose in life from a weird, imagined superhero named St. Sebastian. He may be named after the persecuted martyr of an earlier age, but this St. Sebastian lives in the guise of a red-eyed moth kept in a jar. 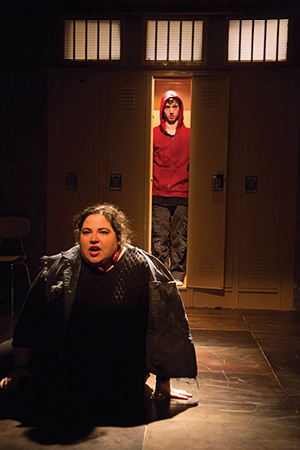 Allie Villarreal is very strong as his pal Claryssa, though Sebastian clearly gets on her nerves. She is very good at lapsing into other characters, even for a second, as when she gives a menacing grin to transform into the kids’ chief tormentor, Clinton.

The desperate act they are driven to do is as obvious as the hoodie on Sebastian’s head. While Greene’s play provides flashes of understanding as to the motivations of cornered victims of bullying, it’s becoming as much a theatrical cliché to have young troubled kids turn to shocking violence as it is to make every returning veteran a PTSD victim or have elderly characters die on stage.

Had the play been written here instead of Australia where gun ownership is so much more restrictive, it might have gone in a very different direction – and been over quicker. As it is, it extends into one long act, with an inevitable cataclysm that seems to take a while to reach and a resolution that is not especially reassuring.

Kids “down under” may not be getting the message that may be more effective here: To ignore or report bullying when it arises; to persevere and wait out the challenges of high school; and to realize that, just maybe, things will get better. Still, how many theaters even bother to look into this world? It will be interesting to see how young people in particular will respond to the immediacy of the acting and production.