Theatre Review: ‘Once On This Island’ at Olney Theatre Center 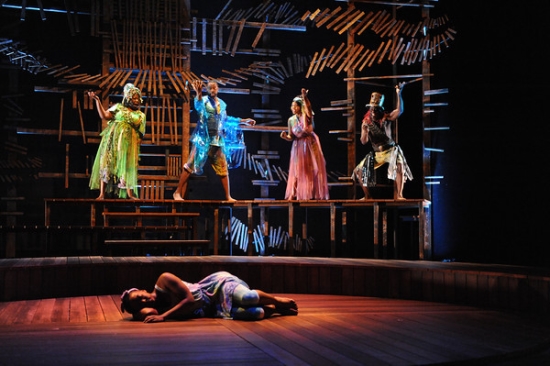 A booming storm yet again rocks this vulnerable Caribbean island, which happens to be Haiti, “The Jewel of the Antilles.”  And in a matter of 90 minutes—the length of a typical wind-swept, drenching and damaging tempest —theatre patrons attending the musical Once On This Island playing at the Olney Theatre Center will be told how a peasant girl can pull strangers on the island together through the power of love. This is accomplished largely through storytelling, an intrinsic part of the peasant culture on Haiti, which serves to entertain as well as to instill values in children.

Artistic Director Jason Loewith along with veteran theatre director Alan Muraoka, who is  known for his TV work for Sesame Street and making his Olney debut, assembled a talented cast and creative team to deliver a tightly-staged, colorful spectacle in which the story showcases the best of humanity but at times presents a dark reality. He uses a Red Cross shelter following the storm as the setting in the present to symbolically remind the audience of the effects of such disasters on the population, which have been all too common in Haiti.

These efforts come into play in Once On This Island as the high-voltage performers are clothed in vivid and at times, rather unconventional Caribbean garb while a stunning set provides an attractive and functional backdrop.  Add to that the splashy bright pastel lighting and excellent sound design and you have a first-rate production through and through.

Once On This Island whose book and lyrics by Lynn Ahrens and music by Stephen Flaherty was based on the 1985 novel My Love, My Love, or The Peasant Girl by Rosa Guy who, in turn, was inspired by the cultural, political and historical environment in Haiti. Some Romeo and Juliet and The Little Mermaid influences contribute to the storyline as well.

Eight-time Tony nominee Once On This Island ran on Broadway from 1990 to 1991 completing nearly 500 performances.  The story begins with a young girl frightened at the sounds of the storm.  The peasants in the village attempt to soothe her with a tale of another young girl, Ti Moune played on the night this show was reviewed by Ariel Cunningham.  Shelby Renee Fountain shares the role.

According to Haitian religion, Vodou, the island is ruled by four rather capricious gods: Asaka, Mother of the Earth (Theresa Cunningham); Erzulie, Goddess of Love (Fahnlohnee Harris-Tate); Agwe, God of Water (Nicholas Ward); and Papa Ge, Demon of Death (James T. Lane)—each with a completely different personality.  They, along with the other peasants, seamlessly become the Storytellers through song, dance and dialogue as the tale comes to life.

On this island there are distinct class and racial divisions.  The “black as night” peasants dwell on one side of the island while the richer, lighter-skinned grandes hommes, descendants of the original French planters, live on the other side.   Agwe unleashes a big storm that leads to a devastating flood, which wipes out villages throughout the island.  Young Ti Moune is saved by the gods and is rescued from the top of a tree by peasants Tonton Julian (Wendell Jordan) and Mama Euralie (Duyen Washington) who become her adoptive parents.

As years pass, Ti Moune (Aisha Jackson) becomes an ambitious and romantic woman who wants to go out in the world on her own and prays to the gods for her to be like the grandes hommes.  They laugh at her. Erzulie wants Ti Moune to experience love though Papa Ge makes a bet that death is stronger than love.

Ti Moune finds a young man named Daniel (Eymard Cabling), one of the grandes hommes after a storm-induced car accident that was orchestrated by the gods, and she takes care of him. Papa Ge, the Demon of Death, wants to claim him, but Ti Moune offers her life in exchange—an agreement that she may come to regret.   Despite her parents’ concerns she falls in love with Daniel, hoping that he feels the same way.  In doing so, Ti Moune tries to breach the class divide in her pursuit of Daniel.

When Daniel emerges from unconsciousness, she convinces him that she saved his life.  She also persuades him that the “gift of love” of spending days and nights with him would help the healing process.  He eventually falls in love with her.  The townspeople as well as her parents object to this mixing of the classes.

Ti Moune soon discovers that Daniel was hiding something that will not be revealed here.  Neither will the remainder of the story be disclosed because it contains some interesting twists and dramatic moments that are best left to the audience to experience.

Much of the storytelling is accomplished through song and dance with some dialogue interwoven throughout.  The Caribbean accents in the singing and spoken words could present a challenge to some audience members to decipher.

The music in the production is a blend of calypso-style rhythmic tunes with a pop influence and soft ballads.  Musical Director Darius Smith and the remainder of the 6-piece orchestra do a fine job in backing up the talented cast.  The ballads are pleasant to listen to and are often filled with emotion.  “The Human Heart” sung by Fahnlohnee Harris-Tate and “Forever Yours” that was performed by Aisha Jackson, Eymard Cabling and James T. Lane are standouts.

The up-tempo numbers, such as the amusing “Mama Will Provide” sung by Helen Hayes Award winner Theresa Cunningham, injects energy into the production.  Also excelling is the opening number, “We Dance,” performed by the Storytellers, which sets the stage for the show’s plotline. These numbers are supported by the exuberant island-style choreography well executed by the cast and ably directed by Darren Lee.

As Ti Moune, Aisha Jackson is wonderfully proficient in both her singing and acting, demonstrating intensity as well as vulnerability.  Her rendition of “Waiting for Life” is a good example of her vocal prowess.  Her acting ability is on display as Ti Moune covets the love of Daniel.

Eymard Cabling does a good job as Daniel.  He was last seen at Olney in the smash production of The King and I, and his talent is on display in this show.  Mr. Cabling’s performance of “Some Girls” is among my favorites.

Nicholas Ward as Agwe and James T. Lane as the antagonist Papa Ge possess powerful baritone voices and have a commanding presence on stage as dancers.  Theresa Cunningham as Asaka and Fahnlohnee Harris-Tate also excel in their vocals and dancing.

The entire production crew and ensemble took a good story and made it better with superb work.  Costume Designer Helen Huang employed non-conventional materials to create a “hybrid of everyday clothing.” Ms. Huang cleverly used plastic, soda can tabs and cardboard items representing objects that would be left behind after a storm and formed the base of the costumes as the barefoot performers switch to other characters.

Scenic Designer Milagros Ponce De Leon crafted an artistic, visually pleasing set consisting of multi-level wooden platforms on a round stage with an abstract display of short wooden poles pointed in all directions as the backdrop to perhaps depict huts, palm trees or other island fixtures ravaged by storms.

Kudos to Lighting Designer Marc Hurst for his outstanding work in unleashing a spectrum of rich hues over the stage to coincide with the moods and emotions of the action.  Also, Sound Designer Jeff Dorman did a fine job in creating the sounds of storms and creating a chilling echo for Papa Ge’s ominous pronouncements.

Once On This Island leads a poignant journey in describing how strangers with different backgrounds can come together despite daunting challenges.  The show hits upon such issues as love, hatred, prejudice, death and grief among others, and unlike most fairy tells, it doesn’t have a happy ending.  Yet, when looked at in its entirety, one can see the best of the human spirit in play.  This well directed and performed production is worthy of the standing ovation it received.