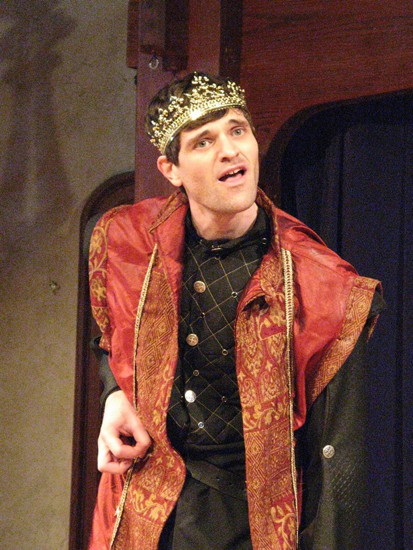 The Baltimore Shakespeare Factory kicks off its 2014 season of “Malice and Misadventure” with the production of one of the most deliciously fun villains in Shakespeare’s canon of historical dramas. Tom Delise directs this Richard III with 15 actors portraying an astounding 50 roles. Richard III is the bloody tale of the crippled, hump-backed member of the royal family who schemes and murders (often with humorous asides to the audience) his way to the crown only to meet his death on the battlefield.

This is a no frills production, much like it was presented in Shakespeare’s day. Performed at their home at St. Mary’s Church in Hampden, the stage is simple – no elaborate sets, special lighting or microphones. The visual focus is on the lovely costumes and accessories designed and constructed by April Forrer.

Unlike Shakespeare’s time when women were forbidden to act in the theater, the ladies take on many of the male characters in Baltimore Shakespeare Factory productions. In this presentation not all succeeded, with some of the women acting more like the caricature of how a “man” acts. Company member Barbara Madison Hauck is an exception not only in her male roles but also as Queen Margaret. She is a true chameleon.

…the Baltimore Shakespeare Factory will no doubt continue to blossom…

Ian Blackwell Rogers, dressed all in black, is wonderful as the Duke of Buckingham, Richard’s right-hand and then victim. Regional theater veteran, Jean H. Miller is a standout in her many roles, notably as the Duchess of York, Richard’s mother. Ben Fisher is a joy to watch taking on five characters, among them the doomed Duke of Clarence, Richard’s brother and first victim.

As Richard, Chris Cotterman has a huge task and he performs the character quite well. Reminiscent of the lead in the British series, Yes, Minister and now Kevin Spacey in the American version, House of Cards, he portrays this classic character with the proper venom and wicked sense of humor. He embodies the villain you love to hate and hate to love. 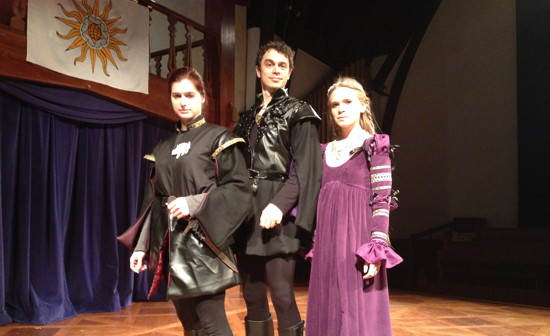 Another treat is the cast interaction with the audience before and during the play, giving the atmosphere a festival feeling. The performers sing and play musical instruments and perform modern pop tunes that blend well with the theme and characters of play. The company is also partnering with the Baltimore Humane Society in dog adoption. This performance starred Jazz, a loving pit bull, who charmed all of the audience members on and off stage.

This is a young and maturing company. As their experience grows, the Baltimore Shakespeare Factory will no doubt continue to blossom, bringing the great work of Shakespeare to Baltimore audiences.

Richard III runs through April 19, 2014 at The Baltimore Shakespeare Factory, The Great Hall Theatre at St. Mary’s Church, 3900 Roland Avenue, Baltimore, MD. For tickets call the box office at (410) 921-9455 or purchase them online.