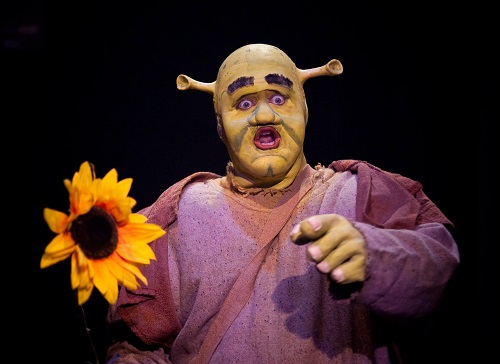 It’s not every day that a green ogre with a diet of rats and toads,  not to mention very bad table manners is really the “Prince Charming” of a fairy tale.  And once you really get to know this ornery ogre named Shrek, you learn that the real ogres are the ones that don’t allow creatures to be themselves.

This message of accepting creatures, no matter how different, so long as they are respectful and kind to one another is told through the story of Shrek The Musical, now playing at Toby’s Dinner Theatre in Columbia, Maryland.

You may have seen any of the four popular animated film versions of Shrek, TV specials, or maybe you read the 1990 book that started it all called Shrek! by William Steig.  Shrek The Musical is a Broadway musical from 2008 with music by Jeanine Tesori and book and lyrics by David Lindsay-Abaire.

The Broadway musical version of the story is about an ogre named Shrek (Russell Sunday) who is shunned by the rest of the world for being different.  He is living all alone in a swamp until a ragtag group of misfit fairy tale characters like Pincocchio (Shane McCauley) and Humpty Dumpty (Tierra Strickland) impede on his land after being castoff from the kingdom of Duloc by the land’s pint-sized ruler, Lord Farquaad (Jeffrey Shankle).  If Shrek can rescue Princess Fiona (Coby Kay Callahan) from her lava-surrounded tower, Lord Farquaad promises to remove the fairy tale misfits from off of his land.

Reluctant at first to even have a friend, Shrek finds companionship with a lovably annoying Donkey (Calvin McCullough).  Together they attempt to save Fiona from the tower and the clutches of a torch song-belting dragon (Ashley Johnson). 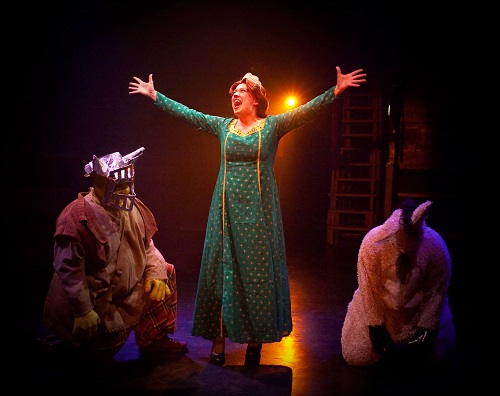 There’s much to enjoy in this family-friendly production co-directed by Kevin McAllister and Lawrence B. Munsey.

First, is the cast.  Let’s face it, without a strong actor playing Shrek, the show would be hard to digest.  Luckily for the audience, Russell Sunday as Shrek has just the right blend of comedy and drama mixed into his performance.  What is more, his singing is filled with joy and passion as in the song “Big, Bright, Beautiful World.”  Coby Kay Callahan as Fiona nails it with the song “Morning Person” while Calvin McCullough as Donkey made for a character that everybody would want as a friend.

Jeffrey Shankle as the vertically challenged Lord Farquaad practically stole the show with his downright hilarious and evil character, while Ashley Johnson as the Dragon stopped the show with her powerful vocals with the song “Forever.”

The costumes and make-up are first-rate.  It is easy to recognize Shrek with his green skin, bald head, and large black eyebrows.  Lord Farquaad’s clever costume made him look vertically challenged all while looking regal.  The use of puppets is also well done.  The dragon puppet with movable parts by Penny Lemire is quite stunning.

Overall, Shrek has a great message, terrific cast, and wonderful production values.  For the extra young kids, I would suggest attending an early Sunday brunch.  Who knows, your kids may even get to take their picture with Shrek!

Running Time: Approximately 2 hours and 30 minutes, with one intermission.