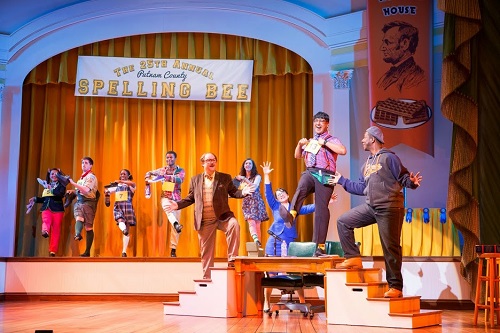 There aren’t enough adjectives in the dictionary to describe the s-u-p-e-r-l-a-t-i-v-e production of the The 25th Annual Putnam County Spelling Bee at Ford’s Theatre in Washington, DC under the brilliant direction of Peter Flynn. This one-act musical comedy – conceived by Rebecca Feldman with music and lyrics by William Finn, book by Rachel Sheinkin and additional material by Jay Reiss – has won multiple awards. Beginning with its run off Broadway, Spelling Bee took home three Drama Desk Awards. When it graduated to the Broadway stage in 2005, the show was nominated for six Tony Awards, winning two, including Best Book. Since then, Spelling Bee has spawned countless productions across the country and worldwide.

For this local audience, the production team has cleverly sprinkled the script with DC references including to the theater itself and former mayor Marion Barry. A sponsor of the Bee is the Lincoln Waffle House. Yes, it really exists and is across the street from the theater. All of the actors come from the DC area; some having worked with director Flynn previously in his highly successful production of 1776 and many among them are Helen Hayes award nominees.

This production is a must-see for everyone and will leave the heart singing.

The judges are comprised of a likeable former winner in the form of Rona Lisa Perretti (Rachel Zampelli) and the blustery Vice Principal Douglas Patch (Matthew Anderson) who gives some of the funniest uses-in-a-sentences for the vocabulary words. The final adult is a petty criminal, Mitch Mahoney (Kevin McAllister, who also plays the fathers of two of the contestants) doing his community service. He is charged with giving the losers a hug and a juice box as he escorts them off the stage. This character, at first intimidating, is surprisingly endearing.

All of the actors in this production are incredibly talented with beautiful voices. It is pure joy to watch this cast. Each gets a moment in the spotlight, giving background and depth to the characters. 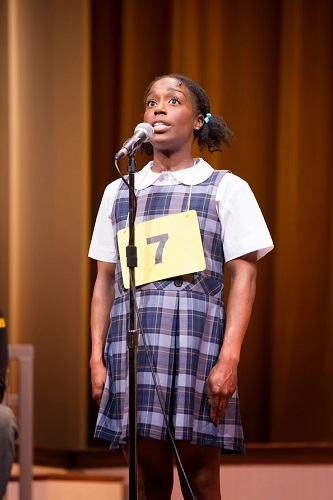 Last year’s winner of the Bee, and sadly first to go, is boy scout, Chip Tolentino (Vincent Kempski) whose hormones take over as he is distracted by his embarrassing physical reaction to another contestant’s the pretty sister in the audience. The actor also plays one of the gay, helicopter fathers of a lisping and enthusiastic Logainne Schwartzandgrubenniere (Kristen Garaffo).

The over-achiever is Marcy Park (Felicia Curry) who, among other things, speaks six languages. It is a refreshing moment for her when she realizes that she doesn’t have to be perfect. Olive Ostrovsky (Carolyn Agan) is the dreamer who escapes the loneliness of absentee parents with the dictionary and love of words. She befriends the super geeky and socially inept William Barfee (Vishal Vaidya) which is pronounced Bar-fay and continually mispronounced by Vice Principal Patch. He has a “magic foot” that helps him spell out the words.

Leaf Coneybear (Nikolas Vaughan) is a sweet, idiot savant who is there because the winner and runner up couldn’t make it. He feels he shouldn’t be in the contest but makes it pretty far and delights in the simple joys of participating. Leaf doesn’t feel the pressure as the other contestants do. Herein lies the lesson. It is not all about winning.

One of the most delightful aspects of Spelling Bee is audience participation. Along with the characters breaking the fourth wall throughout the musical, four audience members are also invited (voluntarily) to compete in the spelling bee alongside the six actors on stage. This means a slightly different show every performance, keeping it fresh and the actors on their toes as they improvise biographies for the participants with hilarious results. 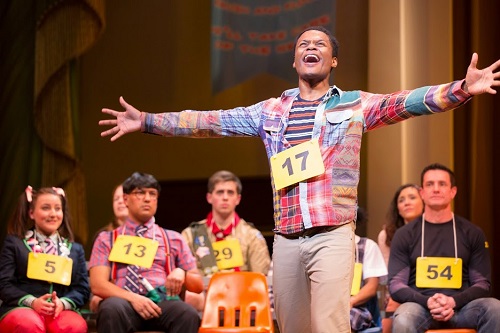 The audience members start out with absurdly easy word like “cow” and are later eliminated one by one with more difficult words. On this particular evening, the last audience member to leave the stage surprised not only herself but also the actors as she repeatedly spelled the words correctly. Her final introduction as a contestant described her as someone who “struggles with musical theater plot lines.” When asked for usage of the word in a sentence, Vice Principal Panch simply said, “no.”

The production team has lent its considerable talents to the staging and success of this show. Michael Bobbitt’s choreography is energetic and fun. The delightful score soars under the musical direction of Christopher Youstra. The costumes of Wade Laboissonniere are as diverse and eclectic as the characters. The lighting of Nancy Schertler, with the ingenious scenic design of Court Watson, make wonderful use of the existing architecture of the historic theater and place the audience in the middle of a school auditorium.

With quirky, gentle characters, audience participation and the serious message of the pressures on kids to overachieve, this Spelling Bee is a completely satisfying theatrical experience. This production is a must-see for everyone and will leave the heart singing.

Running Time: Approximately one hour and 45 minutes (depending on the spelling acumen of the audience participants) with no intermission.