Theatre Review: ‘The Lieutenant of Inishmore’ at Maryland Ensemble Theatre 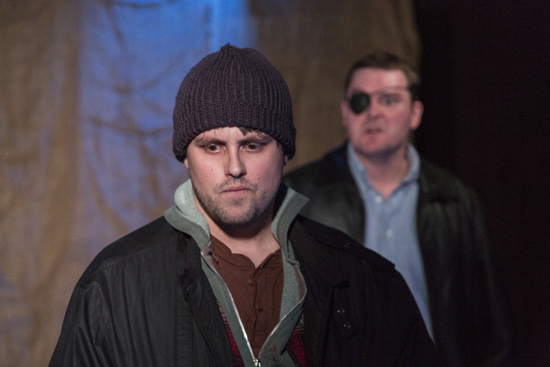 The Lieutenant of Inishmore. Photo by Joe Williams.

The Maryland Ensemble Theatre’s production of The Lieutenant of Inishmore is a very edgy and lively rendition of the comedy noir by playwright Martin McDonagh. First premiering at the Royal Shakespeare Company in 2001, the play’s dark overtones serve as a backdrop for its pitch-black, absurdist humor.

The production is directed by Tad Janes, who has a string of regional credits. His direction nearly keeps the production from becoming a violent free-for-all and preserves some of the moral sentiments of the play. It is set in the early 1990s when the IRA is making their first awkward steps toward making peace with Britain. Mad Padraic is a man considered too crazy for the INLA (IRA) but holds the rank of lieutenant in the splinter organization and lives on Inishmore, an island in County Galway. His only friend for the past fifteen years has been his cat, Wee Thomas, who has recently turned up dead. He is involved in some gruesome and bloody business when he receives the news from his father that Wee Thomas is “doing poorly.” He wishes to keep the news of the cat’s death from his son for as long as possible, fearing his response.

The play unfolds in a number of scenes wherein mad Padraic, played with artful sadistic zeal by Jeff Keilholtz, an accomplished stage and television actor, sets out to exact revenge upon anyone in his way for Wee Thomas’s untimely death. The supporting cast of Caitlin Joy as the Padraic-smitten and sadistic Mairead and Matt Lee as her brother Davey, a suspect in the killing of Wee Thomas, are both played with spirited zest. Caitlin Joy is a member of the Maryland Ensemble Theatre and the Stillpointe Theatre Initiative with numerous stage credits and Matt Lee is a veteran actor and an instructor at the Ensemble School.

The play is affecting and disturbing in places, fairly following the tenor of the bloody struggle over possession of Northern Ireland. We get it: the gore, sadism, waste and ultimate irony of the resolution of the play is a metaphor for the violent and ultimately fruitless struggle over Northern Ireland. But the dark and gruesome nature of the play somehow isn’t offset by the moments of humor. The fault is not with the players or the director; it lies with the playwright. There is just too much blood and killing to support a true comedy, however black, and it leaves you walking out of the theatre feeling cold.

Advisory: This play contains adult language, themes and extreme violence and is unsuitable for younger viewers.

The Lieutenant of Inishmore is playing from April 11 to May 4 at the Maryland Ensemble Theatre, 31 West Patrick Street, Frederick, MD 21701. Tickets are available at the box office or online.