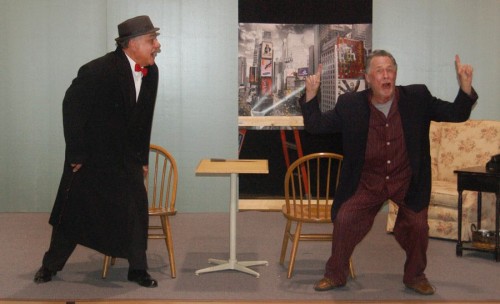 I first saw actors Tom Wines and Jeff Larsen perform in The Foreigner at the Twin Beach Players in 2004. I liked the production so much that I asked the director of the show, Sid Curl if he would reunite the cast to perform The Foreigner at my theatre in Baltimore City in 2005.

In Neil Simon’s The Sunshine Boys at the Twin Beach Players, Tom Wines and Jeff Larsen are reunited once again; This time as Willie Clark (Jeff Larsen) and Al Lewis (Tom Wines) who were once known as the vaudevillian comedy team of  “Lewis and Clark.” Ironically, The Sunshine Boys is about two performers who are reunited to perform together again after years of being apart.

Larsen and Wines are so different, and yet that is why they are so funny and endearing.

For forty-odd years Lewis and Clark performed outrages comedy acts on the vaudeville stage.  All was not funny, however for these men of merriment. Lewis and Clark not only grew to hate each other, but never spoke to each other off-stage throughout the final year of their act.  Though vaudeville was dying, Clark wanted the team to continue.  Ready to retire, Lewis broke up the act, creating more animosity between the two.

It is now 1972 and CBS invited the team to reunite for a TV special on the history of comedy, with Lewis and Clark representing the vaudeville era. Clark is convinced by his nephew Ben (Tom Weaver) to revive one of the old routines one last time. The two are as cantankerous as ever. In rehearsal for the scene, “The Doctor Will See You Now,” Clark says, “What do I have against rehearsing?  It’s the show I’m against doing!” 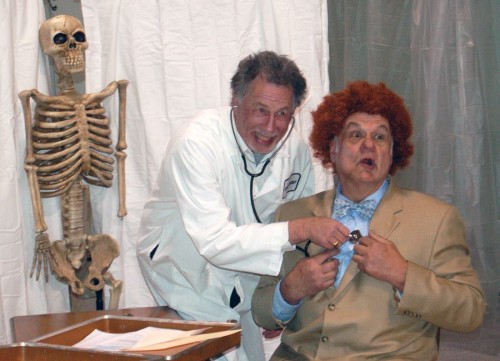 Skilled at directing comedy, Sid Curl has included many classic moves of comedy timing, such as “the slow burn”, “the double take,” “the spit take,” and “the finger” (a different term in comedy).

Sadly, it is difficult to understand what the actors are saying because of the sound of an echo created in the performance space at the North Beach Boys & Girls Club. Needless to say, the disorienting echo hampers the ability to have perfect comedic timing.

Even under the best of circumstances, Neil Simon’s The Sunshine Boys is slow to rise, clouded by a first act that has the dated feel of a vintage TV sitcom.  The clouds lift and the sun shines in the second act when we finally get to see Lewis and Clark in the CBS TV studio rehearsing “The Doctor Will See You Now,” complete with nurses (Staci Most and Samantha Wadsworth), the patient (Sid Curl), and Eddie (Aidan Davis), the production assistant.

The set, costumes, lighting, and music fit well at the North Beach Boys & Girls Club facility.   For this production, they choose to have raised, teared platforms with chairs for the audience and the set, nice and sturdy on the floor. The one gripe I have with the set is with the window in Willie’s apartment.  The year is 1972, and yet the view from the window in the apartment is of Times Square featuring posters of musicals such as Phantom of the Opera, Rent, and Wicked — all of which didn’t exist in 7o’s.  Maybe the window looks into the future?

Overall, it is a real treat to see Jeff Larsen and Tom Wines together on stage again.  Larsen and Wines are so different, and yet that is why they are so funny and endearing.  They certainly could be compared to “The Odd Couple.”  For Larsen as Clark, it seems that all the world is a vaudeville stage.  For Wines as Lewis, it seems that he is regretting visiting his past.  Together, they put up with each other’s  idiosyncrasies for the good of CBS and their fans. But as Clark says, “I’m happy, I just look miserable.”

Running Time: 2 hours and 10 minutes with one fifteen intermission.

The Twin Beach Players production of The Sunshine Boys plays through April 13 at the North Beach Boys & Girls Club.  For tickets and information, visit online.