Theatre Review: ‘The Two Gentlemen of Verona’ at The Folger Theatre 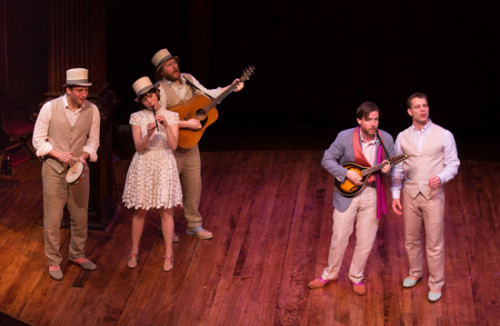 As William Shakespeare hits his 450th birthday this week, what better way to celebrate it than at the Folger Theatre, the classiest showcase for the Bard in town and possibly the nation. On stage during the celebration is a sparkling production of his first play, The Two Gentlemen of Verona in the D.C. debut of New York’s young Fiasco Theater.

The company’s name isn’t just self-effacing, it’s inaccurate. There is nothing in their brisk approach that resembles any shambling disaster. On the contrary, it is as buoyant and direct a presentation of the romantic comedy as you could hope for, bubbling with energy and verve to keep the prose – even in the writer’s developmental stage – alive four centuries hence.

The sole gimmick here is in modern day dress (or that of the turn of the last century). Costume designer Whitney Locher provides lovely dresses for the two women and light linen suits, vests and springlike attire for the gentlemen. With the pink pinstripes, robin’s egg blue bow ties and pastel saddle shoes, you might think they were dressing for opening weekend’s Easter holiday.

…it is as buoyant and direct a presentation of the romantic comedy as you could hope for, bubbling with energy and verve…

But no, it’s all part of reflecting the lightness of play’s season “when a proud-pied April dress’d in all his trim/Hath put a spirit of youth in every thing.” (As Birthday Boy would put it). The company of six sits around the perimeter of the Folger’s rich wooden Elizabethan theater and bound on stage as needed with most of the cast playing multiple roles. On the sidelines, they often frame action with evocative bits of music utilizing cello, guitar, flute, or voice, putting Shakespeare’s rhyming sonnets to song. 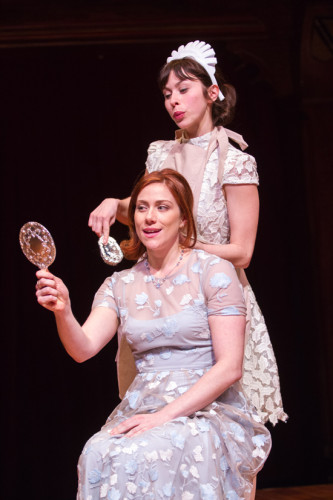 Lucetta (Emily Young) tending to her mistress (Julia, played by Jessie Austrian) in The Two Gentlemen of Verona. On stage at Folger Theatre April 17 – May 25, 2014. Photo by Teresa Wood.

That’s the most radical thing they do to the play, which they otherwise leave plain so they can enliven it with a fresh, zesty and honest presentation. The cast is attuned enough to the text to augment it with moans, cries, laughter, shrieks and gestures, true to the characters and the tale if not explicitly described on the page. This brings the story alive for a new audience – indeed, one as young as the one Sunday where a pair of youngsters were absolutely rapt in the front row. Verona is something of a template for future, better realized Shakespeare classics, with themes that would recur again – mismatched lovers, houses in dispute, women traveling in disguise as men and couples lined up for happily ever after matrimony at the end.

The play has fallen out of favor in recent years for a passage in Act Two when one character’s threat to rape a woman is prevented by a man who nonetheless seems to offer the woman back to him after they’ve proven themselves friends once more. But Fiasco speeds through the scene whose line in question – “All that was mine in Silvia, I give thee” – could just as well mean he regards his old friend as highly as his mate. Certainly nothing else in the tone of Verona would insinuate anything darker; not the way it’s played here.

Indeed, one might as well investigate a subtext of excessive littering in the Fiasco production, as torn up bits of love letters in the play are augmented eventually in a full-on flurry of paper – the other main flourish by co-directors Jessie Austrian and Ben Steinfeld and scenic designer James Kronzer. Austrian is part of the exuberant cast, as the expressive and wailing Julia. Usually the addition of caps and pants fail to produce convincing male in disguise in Shakespearian comedies, but she actually seems to transform (also, she doesn’t cry as much).

The rest of the excellent cast includes Zachary Fine as the love-lorn Valentine, as well as the scene-stealing role as the dog Crab, whose dumb, happy looks are too perfect. Noah Brody is the impetuous Proteus, whose changeable heart means he’s giving one woman’s ring away to another at one point. Paul L. Coffey provides two roles as the clever servant to Valentine and boorish suitor to Silvia. He also plays a pretty mean cello. Emily Young’s charm as Sylvia seems to make her worth all the ardent attention though she grabs focus early on as Julia’s sly lady-in-waiting. 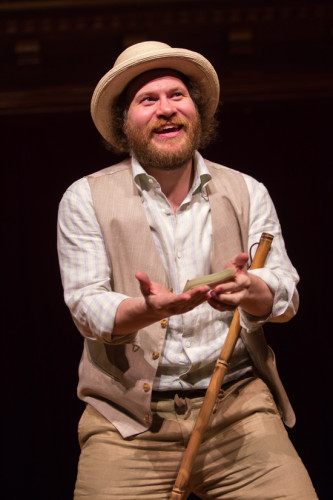 Andy Grotelueschen stars Lance in Fiasco Theater’s The Two Gentlemen of Verona at the Folger Theatre April 17 – May 25, 2014. Photo by Teresa Wood.

The comic excess of Andy Grotelueschen is used in his many roles, most of them as various father figures, but also – with the turn of his pant legs and the addition of a hat – the clownish Launce. His mercurial presence on stage can be dangerous; he seemed to turn on a bizarre reading of a maid-as-monster at one point in the play, cracking up all the others in the cast. That kind of moment – a surprise exploding in a text 400 years old — is just the kind of spark that makes this The Two Gentlemen of Verona so buoyant and welcome on stage. It’s a liveliness also aided by its players freely interacting with the audience during intermission, like the traveling troupe they are. The icing on the Shakespearean birthday cake: they’ll stick around to present their hailed Cymbeline May 28-June 1 when this run is over.

Running Time: One hour and 45 minutes, with one 15 minute intermission.

The Fiasco Theater production of The Two Gentlemen of Verona runs through May 25 at the Folger Theatre, 201 E. Capitol St. SE, Washington D.C. More information can be found by calling 202-554-7077 or online.