Theatre Review: ‘Underneath the Lintel’ at Metro Stage 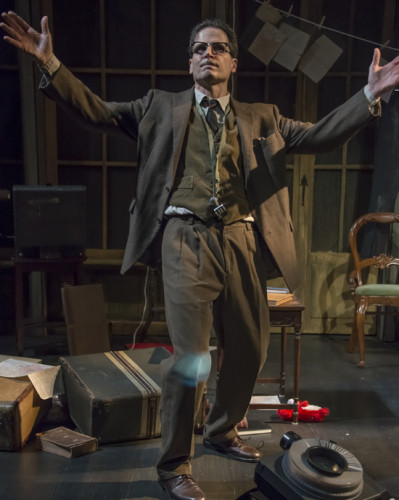 Paul Morella as The Librarian in ‘Underneath the Lintel.’
Photo credit: Chris Banks.

Glen Berger’s play, Underneath the Lintel, shows us the effects of taking your job way too seriously. The solo piece, now playing at Metro Stage, features veteran actor Paul Morella as a Dutch librarian known to us simply as The Librarian in an “Impressive Presentation of Worldwide Instances.”

Here is a man whose job it is to take the books from the overnight slot and check them back in to the library. As it is explained to us, people think sometimes they can drop an overdue book into the slot and get away with not paying late fees. One day a book comes back that is 124 years past due. Can you imagine the fine? Most people would let this go but our librarian is determined to find the owner. This takes him on a worldwide journey and while looking for the borrower develops a liking for the musical Les Misérables. As you might imagine all this gallivanting around the world does not go over well with The Librarian’s employer and I think you know what happens next.

…when Paul Morella is onstage in this show, it’s a solo turn of the highest caliber and definitely one that needs to be seen.

Paul Morella brings many levels to the seriously obsessed librarian. His performance ranges from funny to downright intense. His rant towards the end of the play shows us that when you let your job encompass your life, it will not end well.

Director John Vreeke lets Morella do his job while balancing the comedic and dramatic moments of the story perfectly. This is the second time I have seen this play performed. The first time was at last year’s Capital Fringe. After seeing this current version, I realize the show has many more layers to it and should not be played as all comedy. Morella and Vreeke do an excellent job in not giving us a one-note production.

The cluttered set by James Kronzer adds to the manic nature of The Librarian and includes a slide projector (remember those?) and a clothes line for all the pieces of evidence he collects throughout his travels.

All in all, Underneath the Lintel teaches us two things. First is when your job starts to make you truly obsessive, you might want to think about getting another gig somewhere. The second and more important is when Paul Morella is onstage in this show, it’s a solo turn of the highest caliber and definitely one that needs to be seen. Make a day of it at Metro Stage and catch this play along with The Thousandth Night starring Marcus Kyd. There is enough time in between for a nice meal and you get to see some great solo work in the process.

Underneath the Lintel runs through May 25, 2014 at MetroStage, 1201 North Royal Street in Alexandria, VA. Tickets can be purchased online. (The show is playing in repertory with The Thousandth Night, which runs through May 18, 2014.)