Theatre Review: ‘Vanya and Sonia and Masha and Spike’ at Center Stage 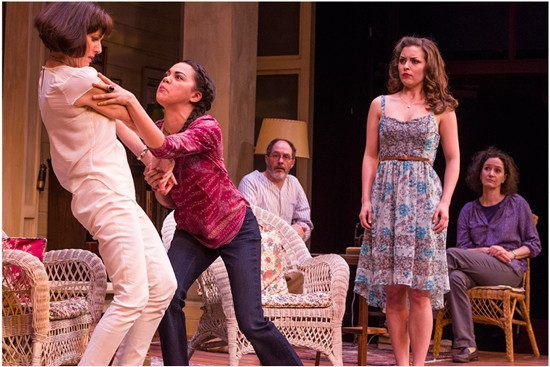 Nothing says explosive family drama than director Eric Rosen’s adaption of Vanya and Sonia and Masha and Spike now playing at Center Stage. The play triumphs in comedy, sibling’s rivalry and defines what it means to confront one’s issue head on. Vanya and Sonia are a brother and sister who lives a quiet existence in wealthy Bucks County, Pennsylvania where they wasted their life away. The only sibling who has lived beyond the walls of their exclusive world is Masha. A jet setting movie star, Masha arrival shakes the live of her siblings particularly when she brings her handsomely young boyfriend Spike. During Masha visit the sibling must deal with unresolved family issues and boy do they ever.

What makes a play a success is a list of actors who can deliver memorable characters and memorable scenes. I was more than impressed with the cast of Vanya and Sonia and Masha and Spike, particularly with the character of Sonia. Sonia is a repressed, emotional woman who lives in fear, yet longing for a life she never had. Her self-pity and sadness makes her a character you root for as she tries to figure how step out of the shadow of her adorning sister Masha. Barbara Walsh delivers an unforgettable performance as Sonia which is only enhance by equally talented Bruce Randolph Nelson who stars as Vanya, an intelligent and insecure man who lets his desire for inner and outer peace leads him to confront who he truly is.

Emily Peter (from NBC’s Chicago PD) as Nina has a naivety; yet optimism that makes Nina the perfect character to stir things up in the sibling’s home. Her youthful spirit is at odds with Masha’s overprotectiveness of her young beau Spike. Spike, played by Zachery Andrews (Love’s Labour’s Lost), is funny as he is clueless and only the spotlight loving Masha, played by Susan Rome, can tame him.

The stand out character in this play is for me Cassandra played Juilliard trained Kerry Warren. Her excessive outburst of psychic visions tossed with signature rants has you laughing right out of your seat. Her “visions” are always guided with the instinct to protect the siblings she takes care of and that alone makes her even more appealing as a dynamic character. 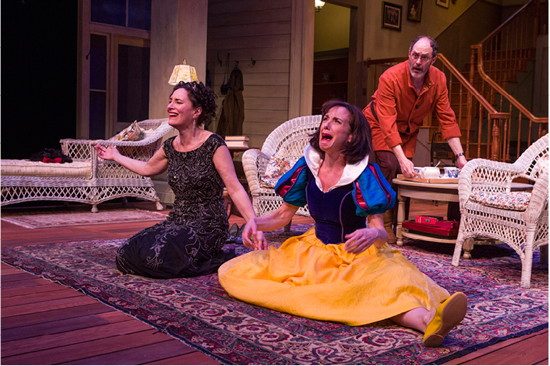 The play takes place on a beautifully constructed stage at Center Stage theatre in downtown Baltimore. The action revolves around the living room of the sibling’s home and is a display for every drama, secret, fear, and self-discovery that reiterates its importance in the sibling’s life and it brings them closer and closer together.

Visiting Center Stage has been one of the best experiences I have had at a theatre. If you arrive at the theatre early and have a few minutes to spare I suggest visiting The Nancy Roche Chapel Bar which lies within in actual chapel featuring beautifully decorated walls and painted windows.

Running Time:  2 hours and 30 minutes with one intermission

Advisory: This show contains profanity, adult subject matter and is not appropriate for children.