‘A Quick 5’ with Emily Young 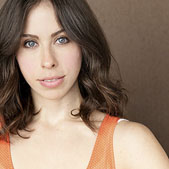 Emily Young is currently onstage at Folger Theatre as part of Fiasco Theatre’s production of  The Two Gentleman of Verona in the roles of Lucetta and Sylvia . She was seen on Broadway in Bloody Bloody Andrew Jackson. Off-Broadway credits include Fiasco’s Measure for Measure and Cymbeline; TFANA/Barrow Street Theater: Bloody Bloody Andrew Jackson; Public Theater: Romeo and Juliet, Theater Breaking Through Barriers: Colorado SPF ‘04. Emily has been seen regionally at North Carolina Shakespeare Festival: King Lear, Much Ado About Nothing; Illinois Shakespeare Festival: Love’s Labour’s Lost, Much Ado About Nothing, Henry V; Trinity Rep: The Cherry Orchard; Kennedy Center: Emma. Workshops/readings: New York Stage and Film, Sundance Theater Lab. On film you might have seen her in God of Love (Academy Award for Best Live-Action Short 2011), Manhattan Melody or Natives. As you can see Emily has a wide range of  credits which include a musical and many of the classics. This makes her a very talented and versatile performer. Fiasco Theater is in town for only a few more weeks, so here is your chance to catch Emily in action.

Had you known about or seen anything presented by Fiasco Theatre before your first audition?

I’ve actually known the members of Fiasco for many years now.  We all studied acting at the Brown University/Trinity Repertory M.F.A program.  All six of us were there at the same time, spread throughout different classes. And I’ve known Ben Steinfeld and Jessie Austrian longer than that…since college. The three of us went to Brown undergrad together.  In fact, Jessie and I lived in the same house together during our senior years. So the whole group knows each other quite well. I’ve been an active company member since 2009.

Can you please tell us what makes a Fiasco production of Shakespeare different and unique from a standard production of his work?

We try to approach every play as an ensemble. A phrase that has come up for us many times pertaining to our work is “actor driven.”  We fundamentally, or rather originally, come to the work as actors, even though some of us have now stepped out to direct the plays (someone has to!), but we like to think that everything we do on stage is fundamentally motivated by what we as actors are interested in doing. We try not to make an actor do anything on stage simply because a director suggests it, but rather because the actor is interested in the ideas of the play and what those ideas make him or her want to explore through his or her individual character. In that way the model tends to be a little different.

Another thing we try to do is spend as much time with the plays as possible before starting rehearsal on a given production so that we can try to have the language sink into our bones.  One of the things I think I can say the whole group is passionate about is the opportunity to have language and acting be primary in our productions. One of the most amazing things about Shakespeare is how much the language does in telling the story. Because this is true, we often ask ourselves at the beginning of a project what physical things we think we absolutely need besides just the language and the actors (i.e., set, props, clothes). Once we’ve identified that according to what the text says, we start working with those physical things and little else. It hopefully makes for a more essential, acting and language-based experience of the play.

For example in Cymbeline, we knew Iachimo had to come out of a trunk so we started working with a trunk. In Measure for Measure, the fact that the play takes place in the city as opposed to the court or the countryside was important to us. We also noticed how often the characters entered and exited new and different spaces in the city and how those spaces changed their behavior. With these things in mind, we built our production around six doors that we could walk through (thresholds), each representing a different place in the play.  In The Two Gentlemen of Verona, the text specifies little else besides letters and a ladder, so we tried to see if we could work with only those things first in concert with the language of the play, which is why you don’t see a huge set in the production. Little by little we may add other things like instruments, and other props, but only what we think provides an essential experience of the play. We hope this stripping down helps free an audience to really listen to how the language in the actors’body can tell the story. 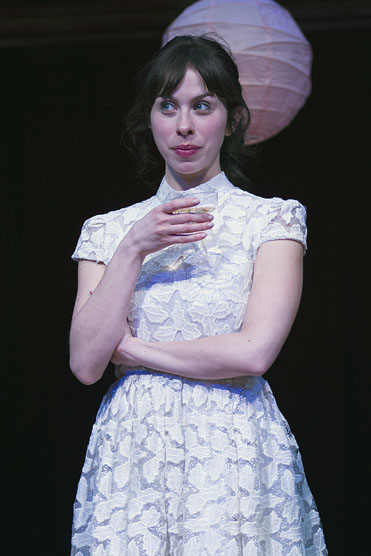 Emily Young is the beautiful Sylvia, the woman who has captured the hearts of two men. Photo by Teresa Wood.

Please talk about the experience of working on the original production of Bloody Bloody Andrew Jackson.

Bloody Bloody Andrew Jackson actually had several incarnations before I joined the family.  There had been workshop productions around the country including one at the Public Theater Lab in New York, which I saw and loved. I joined the Off-Broadway run at the Public Theater and then for the Broadway run as well. It was definitely one of the most fun experiences I have had in the theater. The cast was insanely talented and funny, so there was never a dull moment. I have always loved musical theater so getting to sing, dance and act in a satirical emo-rock comedy was really fantastic.

Can you please pick the character from a Shakespeare play and then one from a non- Shakespeare that you would most like to portray?

I’ve always loved Beatrice for her intelligence and playfulness. I guess what Leonato says sums it up rather well:  “There’s little of the melancholy element in her, my lord: she is never sad but when she sleeps, and not ever sad then; for I have heard my daughter say, she hath often dreamed of unhappiness and waked herself with laughing;” and what she says about herself when asked if she was born in a “merry hour”: “Nay sure, my lord, my mother cried, but then there was a star danced and under that was I born.” She seems so comfortable with herself, but there’s also the aspect of her that is afraid of love, at least in the beginning of the play. I would love to know how those two things work together.

And Viola. She is so tested from beginning to end in the play, and the way she meets these tests with grace and patience is what strikes me. I think she finds herself off-balance in the play, but I’m mainly in awe of how a woman who is all alone (or so she thinks) can bravely enter an unknown society and navigate the folly that comes her way. I would be eager to see how her passion for Orsino mingles with this grace and patience.

Sally Bowles is probably my favorite character in a musical. Though flawed, I admire her for her resourcefulness and survival instinct. It’s always interesting to try to inhabit another person’s life and explore how and why she makes the difficult choices that she does.

I’m going to go ahead and also mention Maggie from Cat on a Hot Tin Roof. Tennessee Williams is another writer in whose plays language is king (and queen). It would be wonderful to be steeped in the rich, sultry language of that play. I’ve always admired Maggie for playing to win. Again, it would be so interesting to get in the middle of the thing when the spit hits the fan to see how and why she does what she does to survive it.

What are your next few projects after The Two Gentleman of Verona closes?

First, we will be performing a week of Cymbeline directly after The Two Gentlemen of Verona closes, from May 28-June 1, at the Folger Theater so you should all come see either or both!  In June, Fiasco will start rehearsal for a remount of our production of Stephen Sondheim’s and James Lapine’s musical, Into The Woods, in San Diego, CA at the Old Globe theater.  After that, in the winter of this year, we are thrilled to be moving Into the Woods to New York City as a part of the Roundabout Theater Company season. We first did the production last year at The McCarter Theater in Princeton, NJ and are very excited to get to do it again twice! I will be reprising my roles as Little Red Riding Hood and Rapunzel.