‘A Quick 5’ with Randy Johnson 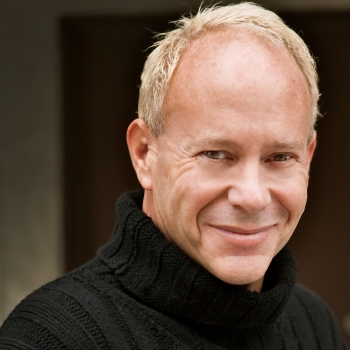 Randy Johnson’s work is being represented for the second time this season at Arena Stage where he is currently the director of Smokey Joe’s Café — The Songs of Lieber and Stoller. Randy conceived, wrote and directed the critically acclaimed One Night With Janis Joplin which played two engagements at Arena Stage before moving to Broadway. Randy is a graduate of the University of Southern California’s School of Theatre in Los Angeles. For the past 25 years, he has written, directed and produced some of the most original, ground breaking and landmark events in the business. Select theater credits include, producer of the West Coast premiere of The Normal Heart starring Richard Dreyfuss and Kathy Bates; original producer of Always Patsy Cline; and writer and director of The Wildest—The Music of Louis Prima and Keely Smith, writer and director of Conway Twitty—the Man, the Music, the Legend. Randy also co-conceived and directed Elvis the Concert. It premiered at Radio City Music Hall and is in the Guinness Book of World Records as “the most successful rock tour performed by a deceased artist.” He has directed in regional theaters nationwide and in Canada. Randy staged and directed Pope Benedict’s most recent appearance in New York. Other work includes directing Katharine Hepburn in a PBS documentary on the life of Jimmy Stewart; Mike Tyson: Undisputed Truth (director/co-writer) and Carly Simon’s concert A Miracle on 125th Street at The Apollo Theatre in 2007. For PBS and DVD: Carly Simon—A Moonlight Serenade Aboard the Queen Mary. His autobiography,  Adventures in Hotel Crazy, was recently published. For his work with AIDS Project Los Angeles, Randy received The Crystal Apple Award. Randy has successfully merged the mediums of pop music and theatre together. Many jukebox musicals are no more than a bunch of songs thrown together with little or no book. Randy’s take is to bring the actual people that made the music famous come to life. The stories surrounding the artists are always interesting and you can’t go wrong with the songs. While  Smokey Joe’s Café The Songs of Lieber and Stoller isn’t a Randy Johnson original creation, it has his signature style. He always brings the music to the forefront and gives the audience a great time. As Dick Clark use to say, Randy Johnson is “an American classic” and we should be grateful that he is keeping our musical history alive by bringing great music back in a fun and always entertaining theatrical setting.

Much of your work is centered on people in the music industry. A Night with Janis Joplin and Always…Patsy Cline are two examples of this. Why do you think these kinds of stories work so well in a theatrical setting?

So much of my career has been creating “theatrical portraits” of great artists. It’s a dramatic form that I understand inherently. I love music and I love artists that defined popular culture. These stories all chronicle a time in people’s lives that defined their generation and in a way the music defined choices that they made along the way. Music is one of the strongest and timeless means of communication we have as a society. Music shapes us no matter what generation we are from. These artists, folk heroes and legends that I choose to create these portraits around all had something important to say, a message of hope, and a message that it’s okay to be exactly who you are. We learn from our heroes and discover new ones every day. To be able to present these stories theatrically is a privilege.

What is the biggest challenge of taking a show like Smokey Joe’s Cafe which was staged originally for a proscenium and doing it in the round at Arena Stage’s Fichandler space?

I didn’t think of putting the show in the round specifically as a challenge – when I sat in the space I thought it was a perfect opportunity to place the band directly in the center of the action—after all, we are celebrating the music of Leiber and Stoller—and wrap the action all around the music. I’ve staged a lot of shows in sports arenas and what I learned early on was that the arena show is a different experience wherever you are sitting. The process of staging in the round makes you think differently, one creates pictures and scenes that are simply not available in a proscenium theatre.  Parker Esse, the cast and I understood that from day one and had a blast staging it in the Fichandler. It was a joyful creative experience for all of us involved. 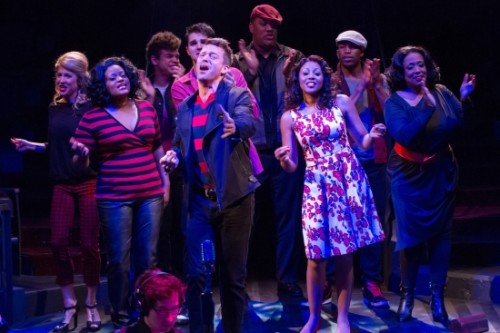 The cast of Smokey Joe’s Café—The Songs of Leiber and Stoller at Arena Stage at the Mead Center for American Theater. Photo by Teresa Wood.

You have worked with a wide range of celebrities ranging from Pope Benedict to Mike Tyson. Can you please talk about your experiences on each of these projects?

Everything is theater – everyday life is theater and when you get the rare opportunity to work on the world stage as I did, with Pope Benedict and Mike Tyson, you bring what you know of theater to unique and diverse venues and personalities. I loved working with Mike Tyson, he is one of the smartest and funniest people I have known. We are good friends to this day. Staging the Papal Mass and concert leading up to it was truly one of the highlights of my life. It was living and participating in history as it unfolded (in front of 10 million people worldwide).

Why do you think people are still enjoying the songs heard in Smokey Joe’s Café after all these years?

Leiber and Stoller’s music is timeless, honest, smart and is present in all generations since it was written. People identify with what Mike and Jerry have to say. You hear it on the radio, see it and hear it in the movies and television. It not only defined several generations, it continues to inspire and inform us as a culture today. To me, Mike and Jerry and their music are cultural icons and timeless stories of our lives in the here and now.

I’m looking at all sorts of projects and sorting through offers that have come in. But first I am taking some time off to recharge, regroup and relax. It’s been an unbelievable three-year whirlwind with A Night With Janis Joplin that took me from concept in the fall of 2010 to Portland Center Stage in 2011, to Arena Stage twice with significant stops at regional theaters along the way leading all the way to Broadway this year and then back to Arena Stage with Smokey Joe’s Café. I am grateful for what has been accomplished in a such relatively short amount of time. But for now I’m just going to take some time for myself and let it all soak in.