The 10 Best Stories Actors Tell About Each Other 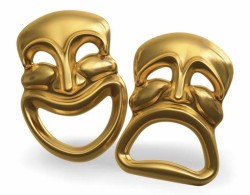 If you spend enough time around theatre and film people, they eventually start talking about their past glories, the failures of others, and shameful acts in general (in my experience, about 10 minutes suffices). I adore these stories, not only because I have a love of the stage but also because these stories make the biggest stars that much more human. What I have learned in collecting these stories is that the older the actor, the better the tale – they’ve either had years to embellish them or they have had enough success that telling the truth won’t ruin a career. So, without further ado, here are 10 of my favorite stories from the world of the actor.

During the filming of “Marathon Man,” Dustin Hoffman was supposed to play a man who had been up all night. And method actor that he is, he spent the night before shooting the scene awake. When he arrived on the set, his co-star Laurence Olivier asked why he looked so tired. Hoffman explained his approach. Olivier paused and then said, “Try acting, dear boy . . . It’s much easier.”  There are several versions of this story around, but I ran across Hoffman himself telling it, so this must be the real version.

In 1981, Jane Fonda and Katherine Hepburn were up for Oscars for their performances in “On Golden Pond.” Fonda received a nomination for Best Supporting Actress, which she lost to Maureen Stapleton in “Reds.” Hepburn won Best Actress. Ms. Fonda recalled, “The next day I call Kate — Katharine Hepburn – I never called her Kate. I called her to congratulate her. Her first words to me: ‘You’ll never catch me now!’ I didn’t get it for a second. Then I realized, going into this, I had two [Oscars] and she had three. If she hadn’t won and I had, we’d be tied. So I could’ve then beaten her!”

After his voice turned Darth Vader of “Star Wars” into one of the most recognizable bad guys in acting history, James Earl Jones had to make a trip across the US by car. About as popular at the time as “Star Wars” was the CB radio. He said he used “Darth” as his handle on the CB during the trip; “the truck drivers would really freak out – for them it was Darth Vader. I had to stop doing that.”

In 1972, after winning acclaim as Michael Corleone in “The Godfather,” Al Pacino, was performing in a Boston production of David Rabe’s ”Basic Training of Pavlo Hummel.” Pacino said, “One night during a performance I found myself relating to a pair of eyes in the audience, which was something unusual for me. I’d heard other actors talk about it, but I’d never done that. And I found I was gearing my performance to that section of the audience. By the time the curtain call came, I had to see, I had to find out who it was. And sitting there, of course, was a seeing eye dog.”

While working with Michael Caine in 1958 in the Royal Court play “The Long And The Short And The Tall”, Peter O’Toole took Caine out to dinner. Caine awoke in a strange flat and asked O’Toole what time it was. O’Toole replied, “Never mind what time it is, what day is it?” It turns out it was 5 p.m. — two days later, and they were due on stage at 8. When they arrived at the theater, the manager told them they had been banned from the restaurant where the binge began. Caine wanted to know what they had done to deserve it; O’Toole told him it was best not to know.

Richard Harris, Harry Potter’s first Dumbledore, drove a truck for a time when he was a teenager, making deliveries for his dad. One day, he had stopped at a pub after making a delivery, and after a few, he drove the truck back toward home. When he drove his truck under a bridge that had 12 feet of clearance, and his truck was taller than 12 feet, it lifted the bridge completely off its pillars. He told the policeman who turned up, “You see, I’m delivering this bridge to Limerick.”

In September 1994, The management of the Mark Hotel in New York called the cops on Johnny Depp and his then-girlfriend Kate Moss. The two had trashed the $1,200 a night presidential suits. Depp claimed the damage had been done by an armadillo that had been hiding in the closet. The police found no sign of the creature. In the next room that night was Roger Daltrey, singer for The Who. Daltrey was unimpressed, “On a scale of one to 10, I give him a one. It took him so bloody long. The Who could’ve done the job in one minute flat.”

Frank Langella, clad in an awful green suit, attended Derby Day with his pals Paul and Bunny Mellon. Having hurried over from Paris, he was completely out of uniform (gentlemen wear grey only for the race). The suit did get the attention of the Queen Mother, who said “My word – where have you come from?” Langella told her he had just come from Paris where he was doing a film, titled “La Maison Sous les Arbres” (The Deadly Trap). He explained to the Queen Mum (whose French was more than passable) “That means ‘The House Under the Trees.” She graciously replied, “Thank you for telling me.”

That’s not bad, but Langella has a better one. One summer as an apprentice at a theatre in New England, he visited Bunny for lunch in Osterville, Mass. and discovered that also on the guest list were President and Mrs. Kennedy, Noel Coward, and Adele Astaire, Fred Astaire’s sister.  Langella said that Coward began singing and playing the piano, and then, Astaire and JFK started to dance. “His face was blissfully silly as he feigned a nightclub entertainer and tried to mirror Adele’s moves. Before boarding the helicopter the President said to me: ‘What do you think, Frank? Should I keep my day job’?”

One of the great acting rivalries was between Marlon Brando and Montgomery Clift, both major leading men in their day. However, Clift was in a terrible car accident and began drinking himself to death. One day, Brando had a break during filming and was only 20 minutes away from Clift’s house. He came over, and Clift had his assistant let his rival in. During the visit, Brando said, “Look. I am only where I am today because I have had you to compete with. If I’m good, it’s because you’ve always been better. When I saw ‘Places in the Sun,’ I thought – Darn. He’ll get an Oscar for that. I need to be better. I need to work harder. Because if I’m good, you will always be better. And I need you. I need you. I need to know you’re out there, beating me at my own game. So I want you to cut all this s**t out. You have to stop drinking and taking pills, you have to get back to work again. Because I don’t know what the hell I’m doing if you’re not out there doing it, too. You get what I mean?” Clift said to his assistant, “I had no idea. I had no idea he felt that way. I always felt the same way about him.” Although he was never the superstar he had been, he returned to work.