Theater Review: ‘Faith Healer’ by the Quotidian Theatre Company at the Writers Center 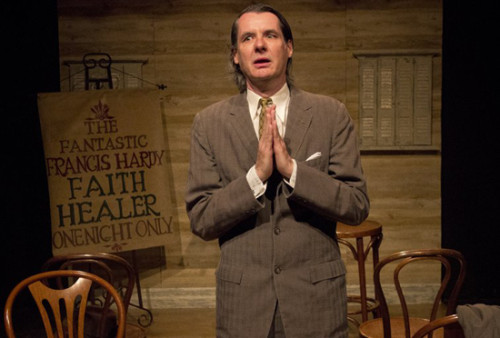 Brought to life by three skilled actors, Faith Healer is the tale of being on the road—a touring performer by the name of Frank Hardy (Christopher Henley). See those initials? Good, you got it. A man who healed the sick and the lame in pubs and churches, for a fee of course, Frank opens the show with an engaging, pensive monologue about his journeys around the British Isles.

As he speaks, Frank weaves a spectacular yet somehow dingy rug of his experiences, centering on his own gifts a healer. Background characters in these stories consist of his mistress, Gracie (Laura Russell), and his stage manager, Teddy (Nick Sampson), a Cockney Englishman with a knack for sniffing out and fostering talent. 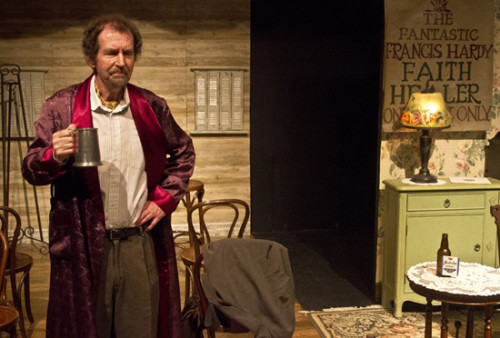 Following Frank, Gracie and Teddy each take the stage in turn, telling the same stories that Frank recounted, but through their own lenses—raising questions about the nature of truth. Frank remembers that his mother fell ill while the trio was on the road. He raced back to be with her on her death bed. Gracie remembers that it was Frank’s father who died. Where do these two different accounts spring from? Faulty memory? A cloud of alcohol? That plain old mix of adoration and resentment within a lifelong partnership like theirs?

Renowned Irish playwright Brian Friel’s answer seems to be that they are both right. Or rather that it we will never know who was right, and therefore that it doesn’t matter. Friel’s script is rich with nostalgic language, and its format—four long monologues, no actor interaction—emphasizes the salient point of Faith Healer well. Storytelling is everything. Storytelling and memory, in partnership with perspective and personality, create subjective truth.

Whether you buy Friel’s idea about truth or not, Faith Healer is an interesting glimpse into the mind of a celebrity, tested against the minds of the distinctly drab people in his orbit. Nick Sampson’s performance as stage manager Teddy is a jocund one, a friendly treat, while Laura Russell’s Gracie is feisty, but at times forced and awkward. 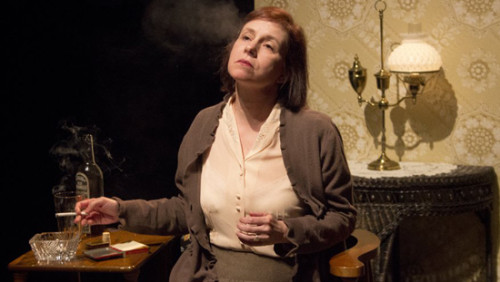 Director and Washington theatrical veteran Laura Giannarelli’s hand is obvious in the sparseness of this production. Even with the subtly ecclesiastical triptych set by Set/Props Designer Jack Sbarbori, a respect for Friel’s simple, human, and naturalistic style dominates as each character narrates his or her deepest thoughts and encounters without ceremony. With period and character appropriate costumes by Stephanie Mumford, Faith Healer promises a tragic and contemplative experience, one to be considered carefully. The religious content of Friel’s play is very subtle, so steer clear of this show if you are looking for fire and brimstone. But stick around to hear stories from another place and time – those so clouded by the distance between us and them, between each and the other – that all that’s left is an impression.

Faith Healer runs through May 25 at the Writer’s Center at 4808 Walsh St. in Bethesda, MD. Purchase tickets online.