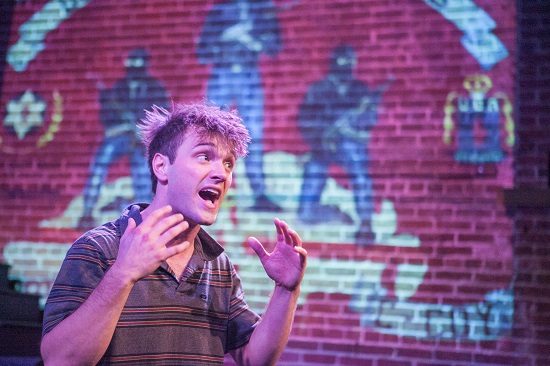 Despite its name, A Midsummer Night’s Riot has (almost) nothing to do with Shakespeare. This impressive one-man feat races toward its end at neck-break speed, with the mesmerizing Josh Sticklin as Ross, an ebullient young man, who dreams of escaping the turbulent Belfast by buying a set of clubs and becoming a professional golfer. Ross bounces in and out of his apartment, down into the republican vs. loyalist riots on the streets. He collides with a thrilling and hilarious cast of characters—all played by him, the narrator.

Keegan Theatre’s mission reads: “To take audiences to the vital heart of the theater experience:  extraordinary artists in an intimate setting exploring the human condition.”

And that’s exactly what A Midsummer Night’s Riot does. Sticklin’s character, though a bit of a caricature, is intensely human. His boyish charm, unstoppable energy, slangy vernacular, and penchant for getting himself into trouble make him a fascinating specimen for examination and consideration. And he’s darn entertaining too.

A thoughtful, but not exhausting piece, ‘A Midsummer Night’s Riot’ brings a superior force in storytelling together with youthful exuberance.

The present-day plot centers on Ross’s friendship with a bumbling troublemaker named Minter, also a native of these working class streets of Belfast. Still, Ross has a far-reaching dream—to be an international golf star like his idol Rory McIlroy. For him, that life offers a future away from the riots in the streets of Belfast that have become daily bread for the working class community of Ross’s roots.

A Midsummer Night’s Riot might have been a traditionally staged play exploring how daily violence both invigorates and deteriorates the psychological well-being of several distinct characters, portrayed by a colorful cast of actors.  But as with his other recent works Basra Boy and Cuchullain, Irish playwright Rosemary Jenkinson has brought us something more intimate—one man’s story. One blistering, raucous, youthfully dramatic tale told by one voice. As irreverent as he is enthralling, Jenkinson’s Ross plays all the different characters for you, often in mocking—but at times loving—tones, evoking storytellers of old.

In its now permanent home at the old Church Street Theater, Keegan’s production team shines, giving Sticklin a backdrop of stairs and windows. An old lectern serves as synecdoche for the local pub where Ross and his friend Minter regularly hob-knob with their fellow rioters. A raised platform serves as the upstairs apartment, where Ross finds himself in flagrante with Minter’s mother.  Yet even real life romance does not deter from his dreams (both day and wet) of the “ninja girl,” a mysterious rioter he has glimpsed in the streets at night. Like the golf clubs he can’t afford, the ninja girl serves as an escape from Ross’s reality.

And it is here that Jenkinson and brilliant director Abigail Isaac make their point:  What lies ahead for these youth bent on destroying each other in the streets? Even if they have dreams and aspirations, is there hope that they might escape the cycle of violence that has consumed their community?

Projections of graffiti and real riot footage adorn the stage left wall throughout The Riot, making an effective backdrop for Ross’s musings. Here and there you’ll notice him echoing the movements of the figures on the wall as they flicker in the shadows of overturned cars burning in Cluan Place. And you’ll hear epic Irish rock music play at intervals where Ross sleeps, dreams, and wakes, thanks to Sound Designer Dan Deiter.

A thoughtful, but not exhausting piece, A Midsummer Night’s Riot brings a superior force in storytelling together with youthful exuberance.

Advisory: Contains sexual and linguistic content that is not suitable for children.

A Midsummer Night’s Riot runs through June 5 at Keegan’s new permanent home at 1742 Church Street, NW in Washington, DC. Call for tickets: 703-892-0202. Or purchase them online.