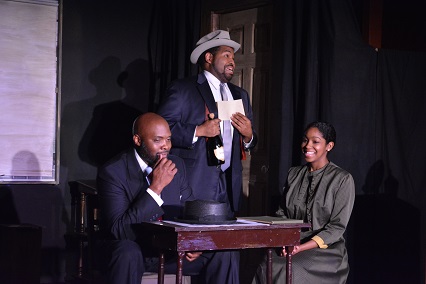 Little known in our current awareness is a time in the late 1920s when Harlem, in the ‘high numbers’ of Manhattan Island, was a centerpiece of an artistic, social and intellectual revival for the African American community. A confluence of industry and personal expression fueled this surge, and made Harlem the place to be, even a destination for curious white people who wanted to feel the vibe and energy of this happenin’ place.

All that changed after the great depression hit. The event was an equal opportunity unemployer, decimating the working ranks and wiping out the burgeoning entertainment industry. Through the life a of blues singer tumultuous life, Pearl Cleage brings out the joys and pains of that troubled time in Blues for An Alabama Sky at Port City Playhouse.

Cleage, a novelist and playwright, was born in Massachusetts and has been a consistent and profound voice in African American drama. A feminist and activist whose usual focus is life in Atlanta, she applies her craft here to fascinating era.

…a memorable evening of theatre.

Opening to a drunken Angel, (Lolina-Marie) our down-and-out chanteuse staggers into her friend Guy’s (Malcolm Lee) apartment. A homosexual and her best friend, he pampers her while promising good times ahead. Scenic designer Michael deBlois and crew have created a simple open tenement that is noticeably cramped, out of necessity and to reflect forced cohabitation. A diva’s couch and a picture of singer Josephine Baker adorn the room, as well as an oversized broken window frame, a view into their world. Opening across the way is adjourning apartment of Delia, (Christine Wells) an upright, slightly uptight woman with a social conscience and is striving to start a clinic for women’s reproductive help and education.

Sam (DeJeannette Norne) a kind, yet hard living doctor, helps her follow her dream as they eventually share their feelings and bond. Rounding out the cast, a la ‘The Glass Menagerie,’ is the gentleman caller Leland (Mack Leamon) a solid dependable man from the south who enters Angel’s life and offers her a different way of life, yet a way out.

‘Blues’, Like ‘A Raisin in the Sun’ before it, is really all about hope. And for an African American, being able to dream in seemingly hopeless times. All of the characters are striving to keep their hope alive, when it just living day by day seems safer.

Whether fueled by love,  artistic expression, or service, all the characters put their hope in something. Its tangible, but so elusive. 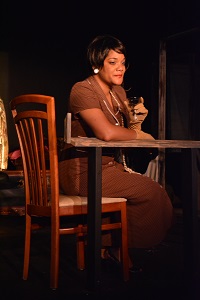 And they are all drawn to the enticing, delightful, bad mannered, soulful, hard drinking, seen too much bad times Angel, who is so on the edge that each day is an adventure in life. After losing her singing job and most of her possessions, she stays with Guy and tries to get on her feet, literally and emotionally.  Lolita-Marie makes Angel a wonderfully complex character that we want to do well and give a good shaking at the same time. Her emotional range is quite impressive, as was her sultry singing voice. Guy kept up the façade of future success well, intoning again and again “one step at a time now.”  An accentuated giggle after every emphatic line is up to one’s personal tastes.

Norne and Wells, idealistic people thrown together in the cauldron of events, provide a compelling side story to Angel’s life. Norne especially, as the world weary doctor coming to grips with his changing world, paces the show well. Leland, Angel’s suitor, is a man dealing with the loss of his wife and child and hoping that Angel can fill the void. A nice less is more performance by Leamon.

Director Eleanore Tapscott seemed to worry less about accents and character sounds than on the overall themes, a good choice.  The brisk pacing matched the portrayal of a person whose life was on fire, and had a good historical Harlem feel. I also felt the inherent pessimism portrayed in the characters that runs through black literature. The cast rose above the easy histrionics to give us a memorable evening of theatre.

Soaring unemployment. Homelessness. The fight for family planning. Cruel abuse of women and homophobia. Some human situations are universal.

As Angel says of her looking back at her missteps “I feel sorry about twenty different ways and I don’t give a darn about any of them.”

Blues for an Alabama Sky is presented at Port City Playhouse, 1819 Quaker Lane, Alexandria, VA, from May 4 to May 17 . For tickets and other information visit online.