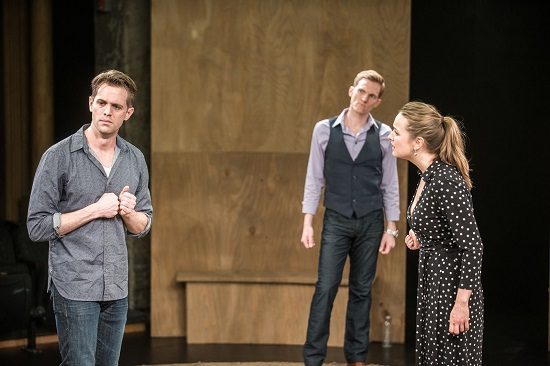 Mike Bartlett’s play C**k  now playing at Studio Theatre examines the questions of do we understand who we really are and what we want out of life. The production features four great actors and a superb staging by Studio Theatre’s artistic director David Muse.

As deep as the questions Bartlett poses in his script are, the plot is pretty straight forward. John (Ben Cole) has twice cheated on his male lover named M (Scott Parkinson) with a woman named W (Liesel Allen Yeager.) As much as John loves M, he admits to really enjoying his encounters with W. This poses a huge question for John about his sexual orientation. Ultimately John invites W to dinner at M’s place so M can see what is so interesting about W. M has taken the liberty of asking his dad named F (Bruce Dow) to also attend dinner for moral support. As you might guess things heat up after M makes some rude comments to W. John is asked to make a choice as to who he really wants to be with. The question of how his life will go will depend on this choice. Even after making his decision (not telling) it’s still questionable and Bartlett leaves it up to his audience to decide for themselves.

…a thought-provoking evening of theatre.

Performance wise you couldn’t ask for a better quartet of actors to play out Bartlett’s scenario. Ben Cole as the tortured and confused John gives a powerful performance. You really wonder what is in the character’s head as this whole situation unfolds and Cole plays the show without being melodramatic.

As M, Scott Parkinson is a great Match for Cole. While he has to play angry a lot of the time, there are many layers to his performance ranging from betrayed to snarky.

Liesel Allen Yeager as W is the character you feel most sorry for because she doesn’t know how to handle this whole thing. Imagine being a woman, thinking the guy you are with loves you, while he is still dating another guy. You might react the way W does.

I am impressed with Bruce Dow in the role as F.  His portrayal is one of compassion and caring and considerably quieter in tone. He is the perfect addition to round out the ensemble.

Director David Muse has staged the show on Debra Booth’s boxing ring type set with good pacing and stages the show so the audience on all three sides of the action in Studio’s Milton Theatre never loses a second of the action. He plays the drama of the story very naturally so it doesn’t come off as episodic TV. Although no one ever disrobes, the sexual tension of the script is always present. David Muse needs to be applauded for pulling this off so well.

C**k at Studio Theatre is one to definitely put at the top of your theatre going list. When you put good acting, direction and production all together it equals a thought-provoking evening of theatre.

Running Time: One Hour and 40 minutes with no intermission.