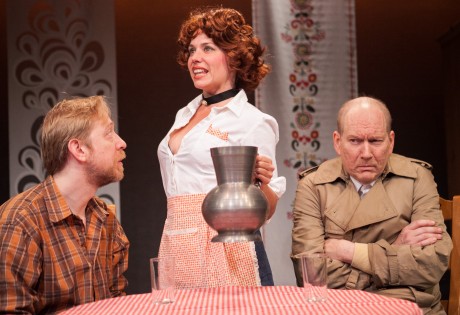 What a wonderful way to spend a Sunday afternoon or evening at the theatre!   The Washington Stage Guild’s production of Elling, directed by Kasi Campbell, is a show based on the Ingavar Ambjornsen’s novel entitled “Elling” tetralogy:  Utsikt til paradise/A View of Paradise,  is a real treat.  As like other stories by Ingavar Ambjornsen, Elling deals with social issues, human behavior, and mental/physical disabilities.

The main characters, Kjell Bjarne (James Konicek) and Elling (Bill Largess), are two peculiar Norwegian men with mental disabilities that have prohibited them from living among the general population therefore being forced to live in a “rehabilitation” center for which the two consider to be an asylum for crazy people.   Although not the best place in the world, the rehabilitation center is somewhat a “safe” zone for the men where their everyday needs are met and they feel protected from the outside world.   However, the Norwegian government has its own plans for Elling and Kjell Bjarne.  The two men are being transitioned to a government funded apartment in Oslo where they will be monitored by social worker Frank Asli (Dylan Myers).   It is here where the real “rehabilitation” occurs as the men are forced to face their fears, emotions, issues of co-dependency, and learn to survive outside of the protected walls of the “asylum.”

Elling has been traumatized by his mother’s death a few years before.   He struggles with anxiety and agoraphobia as well OCD tendencies.  Kjell Bjarne is a “simple” man who hyper-focuses on the desire to have a woman and his incredible appetite for food for which it seems he can never get enough.  His lack of personal hygiene and overall sloppiness drive Elling insane.  In spite of their differences the “Odd Couple” find themselves forming a genuine bond of friendship that will last a lifetime.  Both Konicek and Largess are phenomenal actors who bring life to their characters.   They work well together with a distinct chemistry that compliments one another.

The men adapt to living in their apartment and become quite content with the living arrangement.  However, simply adapting isn’t enough.  These men must prove to Frank Asli, the social worker that they can become normal contributing citizens to the community who are able to survive on their own.  This isn’t easy but the fear of losing the apartment and being placed back in the “rehabilitation center” is enough to force the men, mostly Elling, out of their comfort zones.  Elling must learn to socialize with other people and connect himself to the outside modern world for which he resists but eventually overcomes. 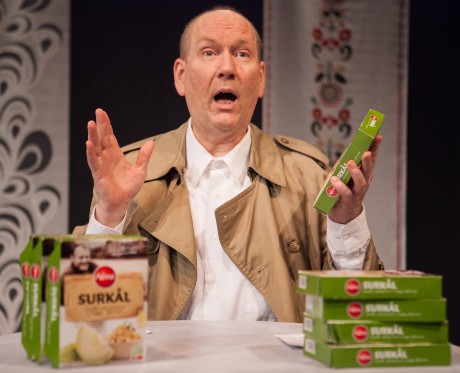 As life unfolds at the apartment in Oslo, Kjell Bjarne finds love with a pregnant woman, Johanne (Tricia McCauley), who resides in the same building, and Elling discovers his passion and talent for poetry which will ultimately be the catalysts these two men have desperately needed to plunge them into living a normal life in society.   As a result of being pressured to leave the apartment by Asli, Elling meets a new friend Alfons Jorgensen (Vincent Clark).  Alfons is a famous poet who has lost his creative spark.   Elling and Alfons build a friendship based on common interests and the relationship blooms enabling Elling and Kjell Bjarne to now have a circle of friends for which neither has ever experienced.   The glue of co-dependency that has kept to two men together begins to loosen as others enter their world.  They begin to realize their capabilities as individuals developing interests and lives apart from one another and part of the society in which they live.

McCauley, Myers, and Clark are sensational supporting actors.  McCauley plays several roles in the show including the rehabilitation center nurse, local café waitress, local poet, and Kjell Bjarnes pregnant girlfriend.  She switches between character roles as only a talented experienced actress can.  Myers did a wonderful job playing the hard-nose social worker leading the men out of a life of solidarity and Clark owns his role as the gentle poet who slowly gains Elling’s trust and friendship.