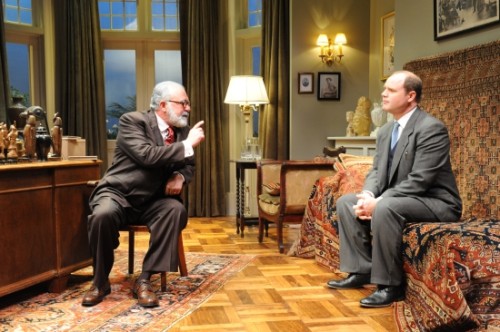 As most of us wonder aimlessly in search of significance amidst an increasingly godless world, there is consolation in seeing this endless internal wondering articulated. And with nothing less than unrelenting tenacity and droll wit, I might add.  Freud’s Last Session, written as a play by Mark St. Germain and now being performed at Theater J in Washington DC, visualizes a debate between treasured and antithetical intellectuals, Sigmund Freud and C.S. Lewis, as they wrestle with one of our most exhaustive questions: to believe, or not to believe… and why?

…this one is a must see.

Set in the furor of London on the cusp of World War II, the play begins in the study, intricately designed by Deb Booth, of psychoanalyst Sigmund Freud, played dynamically by Rick Foucheux.  Visibly suffering from mouth cancer, Freud insists on the less-than-convenient meeting with author Lewis, played with panache by Todd Scofield.  What follows is an unyielding discussion of God versus Science.  Freud, a notorious atheist, verbally undercuts Lewis in typical psychoanalytic fashion, referring to the author’s piety as a form of psychosis, and his faith in God as a, “search for a father figure.”  Unswaying in his faith, however, Lewis refutes each blow with matched intellect, sardonically accusing Freud of possessing the same arrogance the doctor attributes to Christianity.

Despite irreconcilable differences, the two characters retain a sense of mutual respect and humor.  “We’ve been talking for an hour, and this is the first time you’ve mentioned sex,” Lewis says, mocking psychoanalysis’ emphasis on hidden desires.  To this Freud replies simply, “Ah, but your view is too narrow.” The play’s pithy banter is amplified by undeniable chemistry between veteran actors Foucheux and Scofield.

Between air raid sirens and Freud’s debilitating illness, we increasingly realize that the rationality and reason which previously dominated the minds of the characters, no longer takes precedent.  Director Serge Seiden (Jacques Brel…at Metrostage, Apple Family Plays and The Motherf***er with the Hat at Studio Theatre) brought nuanced and human dimensions to St. Germain’s words, allowing the audience to witness the instinctual tenderness and togetherness induced when confronted with our own mortality.

The longing for what’s missing, or sehnsucht, as they say in German, resonates louder in Freud throughout the play, invoked by the sanctity of his opponent and the incremental war updates which blare through the radio. Freud’s aversion to music, which he explains as “manipulation of the senses,” is abated once he realizes his tomorrow may be for naught.

This production, while witty and mentally stimulating, may not be for the lover of spectacle.  Actors are frequently static on stage during the 80-minute show, without intermission.  However, for those of us who love to ponder questions without answers or fathom the unconscious mind and indescribable human condition, this one is a must see.

Freud’s Last Session is running at Theater J  through June 29. It is located at 1529 16th St NW in Washington DC . For more information and tickets, please click here.