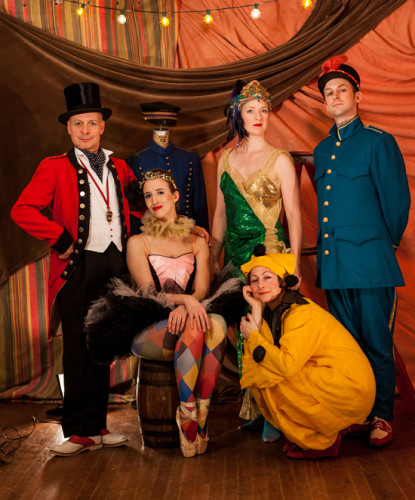 The cast of ‘Impossible! A Happenstance Circus.’ Photo by Leslie McConnaughey.

Baltimore is in for a treat with the debut of the highly imaginative and delightful DC-based theater company, Happenstance Theatre. Their production of Impossible! A Happenstance Circus is being presented at the Theatre Project and a must for the entire family. Six cast members use dance, music, pantomime, shadow puppetry and physical comedy to skillfully create multiple characters (and animals) who are part of a depression-era circus. As the audience enters the theatre, it is treated to music of the 1930s and 40s to set the mood.

The circus acts are presented in a series of vignettes, interspersed with scenes of the lives of the performers after the crowds have gone home. The company’s inspiration has many sources – vintage posters, songs (which the multi-talented actors perform), texts on the history of the circus, and even Charlie Chaplin’s 1928 film, The Circus. There is even nod to the classic “mirror” scene from the 1933 Marx Brothers film Duck Soup which was recreated by Lucille Ball and Harpo Marx on the “I Love Lucy” show in 1955. Every detail of the production feels as if it came to life from a vintage circus poster. Brightly colored costumes and accessories are a seamless mix of vintage and newly constructed pieces. A fanciful set with footlights on the floor transport the audience back to another era.

This production and the actors are simply brilliant. This is theater at its most creative.

The captivating yet simple set design is the creation of Alex Vernon (who also did the construction), Sabrina Mandell and Mark Jaster. Mandell is a force of nature – she is also the set painter, costume designer, actor and, with her husband and fellow performer Jaster, the co-artistic director of Happenstance. Sitting on the right of the set is the small proscenium stage of a traveling circus with a light bulb marquee above that spells out IMPOSSIBLE. There are two levels of brightly colored curtains which allow the actors to perform clever visual illusions. To the left of this “stage” sit the steps to the curtained entrance of a small caravan.

To the far left is the “orchestra” and sound effects cart. Karen Hansen not only expertly performs all of the instruments – from violin to accordion to drum – she creates the sound effects which add to the illusion of the scenes. Hansen also joins the cast in performing several songs and with the rest of the cast, manage to recreate a calliope. The rest of this multi-talented company includes Gwen Grastorf, Sarah Olmsted Thomas, and Alex Vernon.

Each company member takes a turn as the ringmaster throughout the production. All the wonderful stock circus characters are presented here – from the knife thrower and his wife to the Houdini-like escape artist and his assistant; from the high wire ballerina and fire-eater to the hilarious side show freaks. And don’t forget the animal tamer and her creatures (wonderfully brought to life by Jasper with the simple change of a headpiece) and, of course, the clowns.

There is a small story line running through the scenes – love, of course. A stagehand (Alex Vernon) has a secret love for a beautiful trapeze artist (Sabrina Mandell) who, after falling, gamely gets shot out of a cannon. It appears she is never to be seen again – until a letter falls from the sky. This results in some lovely shadow puppetry that brings the most recognizable circus icon to life.

There is very little dialogue and much of the action require the audience to use their imagination and also be participants. Impossible! is built on many layers yet presented so effortlessly. This production and the actors are simply brilliant. This is theater at its most creative.

“Impossible! A Happenstance Circus” runs through June 1, 2014 at Theatre Project, 45 West Preston Street, Baltimore, MD 21201. It will be followed by Happenstance’s, Pinot & Augustine, June 6–8. For tickets and information, click here.