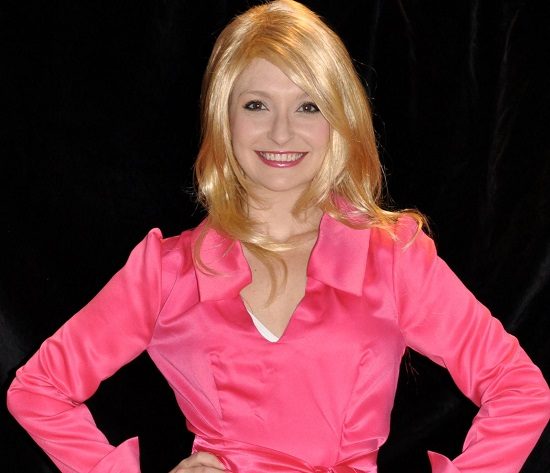 Legally Blonde – The Musical was a dandy production by Charm City Players. It’s closing weekend had audience’s applauding the ensemble numbers such as “Omigod You Guys,” “What You Want,” and “Find My Way/Finale.” Charm City Players is the “new kid in town” housed on the campus of St. Timothy’s in Reisterstown. Legally Blonde was their 2nd production that was cute, charming, and very pink.

Carli Smith was dazzling in the lead role as Elle Woods along with her dog Bruiser (Wilbur). She brought to the role a high level of enthusiasm and a voice that was a perfect match to E. Lee Nicol’s, who portrayed Emmet Forrest. Throughout the show, Elle and Emmet grow closer, while Smith and Nicol offer just the right amount of chemistry making them a winning couple. Their duet “Legally Blonde,” hit all the right notes.

Elle’s friend Paulette played by Susan Schindler is always a laugh-out-loud performer. As Paulette, she is the goofy hair dresser that Elle helps to regain custody of her dog Rufus (Sweet Pea) from her idiot ex. Schindler is meant for this role as she awkwardly falls for the UPS guy. Her bend-and-snap has just too much snap. It is that silly charm though that makes the audience giggle and Paulette a very lovable character.

Warner Huntington III played by Brian Thomas is truly a snob. Willing to give up a “Marilyn” (Elle) for a “Jackie” (Vivienne), Warner buries himself deeper and deeper as he and Elle work through their first year of law school. He shows his true colors when he needles on Elle to give up a client’s alibi.

Vivienne Kensington played by Christina Napp depicted the ultimate mean girl. She badgered and made fun of Elle who was just trying to make friends. Thanks to Vivienne’s lie about a wine party being a costume party, it snaps Elle into realizing that Warner thinks she will never be good enough for him. It’s just one of many instances that bring Elle and Emmit closer together. Opposite Vivienne is the role of Enid played by Annmarie Pallanck. Surprisingly, this character was nice to Elle despite the other co-eds in their class. Pallanck definitely added to the comic relief.

Professor Callahan played by Ed Riggins is a jerk from the get-go. Yet another pretentious person in the Elle’s life that judges her by her looks and personality and not by her abilities as a law student.

Brooke Wyndam was played by Madeleine Favazza, Professor Callahan’s client that is on trial for the murder of her husband. Elle and Brooke connect because they are both Delta Nu sorority sisters. Favazza sparkled in this role as the sexy blonde work-out queen.

Elle’s gal pals’ included Rachel Ann Morgan as Serena, B’Jion as Margot and Meredith Awalt as Pilar. These gals were a lot of fun to watch as they sang and danced their way around the stage. Kudos to those gals who were able to do so in 5 inch sparkly heals!

The roles of Kate/Chutney were played by Coreen Ayr Hamilton; Whitney was played by Emily Nupp; the DA was portrayed by Hannah Gutin-Creech; and Dewey/Kyle was played by Ronald Alexander Woodhead. Each lent support to the principle cast making Legally Blonde an outstanding production. Additionally, this cast was impressive in their ability to work with simple set pieces and sometimes an empty stage. It’s their singing and dancing that lured the audience into Elle’s story, making it such a success.

Though Legally Blonde – The Musical had it last curtain call, Charm City Players summer production is Sound of Music, which no doubt will be yet another musical event.

Running Time: Two and a half hours, including one 15-minute intermission.