Theatre Review: ‘Nero/Pseudo’ by WSC Avant Bard at the Shop at Fort Fringe 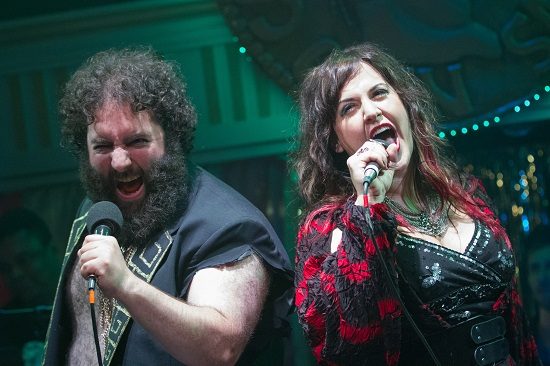 The lava lamps and abundance of tinsel adorning the black box set when you walk through the back door at the Shop at Fort Fringe are only the the tip of the glittering iceberg that is the Nero/Pseudo experience.

Nero/Pseudo is a big play in a small space—giving the impression that you are actually sitting in a Greek-inspired bar in the early 70s era of glam rock. A great band, appropriately dubbed “Suckled by Wolves,” introduces the show, which soon devolves into a fun romp that effortlessly links ancient themes of imperial deification and the twentieth century cult of rock and roll.

At the center of the play are two Greeks – taverna owner Chrysis (Gillian Shelly) and actor Stratocles (Lee Liebeskind)—looking for a way to improve their economic prospects and their spirits. When traveling musician and freed slave Pontus (Bradley Foster Smith) stumbles into the taverna and performs “Achilles Revels in His Victory,” a classic by the recently deceased but much beloved emperor Nero, reputed to be a mesmerizing musician with a cult following in Greece. Captivated by the brilliance of his performance and his striking resemblance to the deceased ruler, Chrysis and Stratocles hatch a plan. They convince, or rather, coerce Pontus into impersonating Nero.

This playful yet mythical show is an experience complete with lots of glitter, lamé, brilliantly fun costumes by Elizabeth Ennis and great ‘70s rock music written by Jim Elkington and Jon Langford. Suckled by Wolves does not disappoint either, and have a friendly rapport with the audience. A trio of screeching, weeping, adoring fans made up of Ryan Alan Jones, Alani Kravitz and Brian McDermott frolick around the stage, clapping with the audience and engaging in hilarious antics, bridging the gap between audience and cast in Nero/Pseudo.

Richard Byrne, creator of book and lyrics for Nero/Pseudo, aided by Patrick Pearson’s direction, infuses this over-the-top, almost campy musical with deeper ideas about art, history, and memory. When does the artist truly die? When he succumbs to biological death? Or is it when his or her art—or in this case, music—is forgotten by those who once loved him? And therefore, can a cult figure like Nero be brought back to life by an impostor like Pontus?

Nowhere in this play does emotion run stronger than in Bradley Foster Smith’s performance as the pseudo-Nero. He is at once terrified and bumbling, otherworldly and epic, a rock star and a child draped unwittingly in glittering cloth. He plays each scene with an enviable electric intensity mirrored in the scenic and lighting design by Jospeh B. Musumeci, Jr and Joseph R. Walls respectively.

See Nero/Pseudo for a disjointed trip to an unfamiliar place in time. Despite a small glitch in the sound, that sometimes made it difficult to hear the lyrics of Elkington’s songs, this rocking musical is an intense experience, one sure to leave you tapping your foot and wondering what your legacy on this earth will be.

Running Time: One hour and 45 minutes, with a ten-minute intermission.

Nero/Pseudo runs through June 1 at the Shop at Fort Fringe at 607 New York Ave. NW in Washington, DC. For information and tickets: Call 703-418-4808 or check out WSC Avant Bard online.