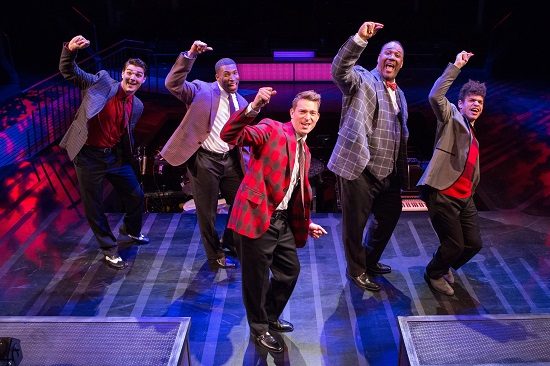 If you are looking to have a toe-tappin’, finger-snappin’ good time, then treat yourself to see Smokey Joe’s Cafe – The Songs of Leiber and Stoller at Arena Stage, now playing through June 8th.

One of the song writers, Mike Stoller was in attendance opening night and spoke to the audience after the performance.  He summed up his thoughts about director Randy Johnson and choreographer Parker Essse by calling them each a “genius.”

Randy Johnson, you may remember, was the director of the smash hit A Night with Janis Joplin which enjoyed two runs at Arena Stage and was followed by a run on Broadway. Parker Essee was the choreographer for Arena Stage’s The Music Man, and most notably the critically acclaimed, award-winning production of Oklahoma!.

From the cast to the creative team, everyone has something special to bring to the table at Smokey Joe’s Cafe.

…a toe-tappin’, finger-snappin’ good time…E. Faye Butler is a rare talent of theatrical proportion!…From the cast to the creative team, everyone has something special to bring to the table at Smokey Joe’s Cafe.

Smokey Joe’s Cafe is a musical revue that features songs from the music catalog of Leiber and Stoller.  There’s no dialog, no plot, and no cafe.  That’s not to say that there isn’t a story.  Each song tells a story. Randy Johnson has brought together a talented cast to tell the story through song, movement, and dance.

Austin Colby, Jay Adriel, Levi Kreis, Stephawn P. Stephens and Michael J. Mainwaring represent the men in the cast.  They do not disappoint.

Tony Award winner Levi Kreis (Broadway’s Million Dollar Quartet) is a crooner that reminds me a bit of Harry Connick, Jr. in both looks and in sound.  There is nothing this man won’t do to get your attention!   One moment he will be playing the piano and the next, standing on top of it! 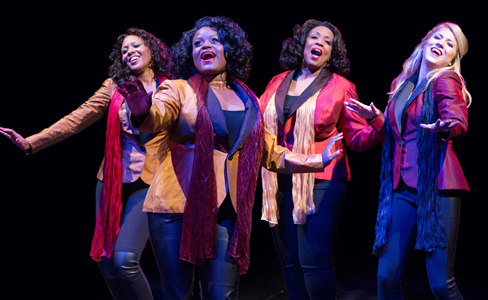 The women do not disappoint either.  Kara-Tameika Watkins, Nova Y. Payton, E. Faye Butler and Ashley Blair Fitzgerald all feature a special quality.

E. Faye Butler is a rare talent of theatrical proportion!  What is her secret?  I think it could be any number of things.  There is her robust and heartfelt singing voice, of course.  For me, I think it is her ability to make each audience member feel comfortable and included.  What is more, her story telling through song always shines through.  She isn’t afraid to be a character that isn’t perfect.  She takes a “here I am” approach.    Her rendition of  “Fools Fall in Love” is just one of the song highlights in the production.

Nova Y. Payton is no slouch either.  The staging and performance of “Hound Dog” is exciting and really tells a story.  Payton’s eye expressions are priceless!

The band, led by Rick Fox is in the center of it all — literally.  The band is in the center of the stage, perhaps as it should be since this show is all centered around the music.  Video projections, lighting, a circular staircase, also add to the look and feel of the show.

One of the hardest theatrical elements is to mix sound.  For this performance, it was hit or miss.  Finding the right balance between voice and instruments is not easy, especially when the band is on the stage.

Overall, Smokey Joe’s Cafe is a toe-tappin’, finger-snappin’ good time!  To hear selections from the song catalog of Leiber and Stoller is well worth a trip to Arena Stage.  Songs like “Yakety Yak,” “On Broadway,” and “Love Potion #9” live on in this wonderful musical revue.