Theatre Review: ‘The Love of the Nightingale’ at Constellation Theatre Company 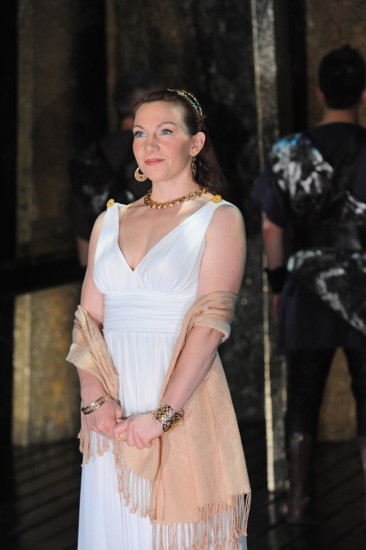 Constellation Theatre Company’s production of The Love of the Nightingale, by Timberlake Wertenbaker and directed by Allison Arkell Stockman, is a play about innocence, laughter, true love, beauty and lies.  Layers of raw feelings and emotions are continually peeled back until nothing remains but truth, pity, vengeance and pain, portrayed through the amazing strength of women and an unshakable bond between two sisters.

The Love of the Nightingale is based on a Latin narrative poem by the Roman poet Ovid, as part of his collection of 15 books and over 250 myths called “Metamorphoses.” First published in 8 AD, Nightingale’s story begins with two Athenian sisters who vow to stay together even after the older one, Procne, marries Tereus, the King of Thrace, and sails far away to his land.  Younger sister Philomele, full of questions and innocence, boldly says what she feels and thinks, and she wants to experience life and adventure.

‘The Love of the Nightingale’ is not a play for the timid, but it is a play for people who expect and enjoy excellent acting and production elements in theatre. Constellation Theatre Company delivers these in abundance.

Unhappy years pass, and a lonely Procne requests that Tereus bring Philomele to her to ease her sadness.  On the journey, Tereus falls in what he thinks is love with Philomele.  Enraged with jealousy to find her in the arms of her true love, who is known only as “the Captain,” Tereus forces himself on Philomele.  When she refuses to stay quiet about what happened, Tereus cuts out her tongue.

Tereus keeps Philomele in Thrace, telling her that her sister has died but telling Procne that Philomele drowned at sea.  Five more years pass before the two sisters are reunited. When they do meet again and the truth is told, vengeance towards Tereus becomes their new vow. 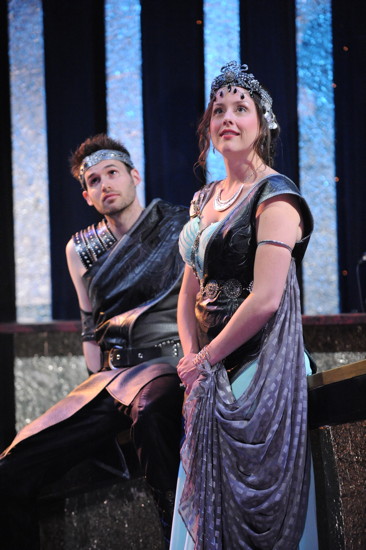 Matthew Schleigh as Tereus and Dorea Schmidt as Procne. Photo by Stan Barouh.

Megan Dominy, as the younger sister Philomele, is able to maintain a delicate balance between innocence and passion, trust and disbelief, love and scorn. Her every movement and expression portrays her emotions so well that when her tongue is cut from her, speaking words is no longer necessary to know every thought and emotion surging through her.

Ashley Ivey, as the Captain, played Philomele’s true love as steadfast, truthful and strong, far more so then the king.  As soon as the Captain walks on the stage, it is easy to see why a princess, who could have married any king or prince from any land, falls in love with him.

Rena Cherry Brown plays Philomele’s servant and was one of the only characters to address the audience from the stage.  Brown is captivating as she shares her feelings and opinions, which for most of the play are bitter comments from an older lady who has lived through her share of mistreatment at the hands of men.

Henry Niepoetter, as the young son of Tereus and Procne, held his own and excelled in an exceptional adult cast.  He also treated us to a small sampling of his singing voice, and I look forward to hearing more from him in future productions. 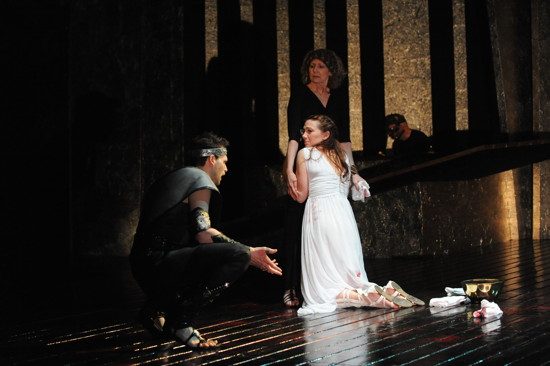 The entire ensemble was excellent, blending together seamlessly to tell this powerful story.  An interesting and wonderful addition to the ensemble was Tom Teasley, a musician and Composer, who provided live music during the entire play.  His music guided the story and foreshadowed the action with many different and unique instruments.  One such instrument is an accordion with a hose and an attached mouthpiece that added a windy sound to each key played.

Award-winning Kendra Rai’s costumes provide a wonderful aesthetic that strayed from traditional Thracian garments by using tunic-like shirts that formed points at the bottom, together with flowing fabrics.

I took my oldest son to this production, and when he heard the play was 90 minutes long with no intermission, he rolled his eyes and gave me that look of, “How could you do this to me mom.”  After it was over, all he said was, “that was amazing!” And I have to agree.  The Love of the Nightingale is not a play for the timid, but it is a play for people who expect and enjoy excellent acting and production elements in theatre. Constellation Theatre Company delivers these in abundance.