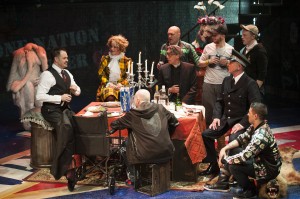 Kurt Weill and Bertolt Brecht’s The Threepenny Opera has to be one of the more difficult musicals from the last century for a theatre company to produce, but Arlington VA’s Signature Theatre is always up for a challenge. There are a few reasons for its difficulty. First, there are many translations from the original German to choose from. Then there is the inherent problem of making undesirable characters such as a murderer, ladies of the evening, and a corrupt police chief likeable. Lastly, we have the problem of the audience knowing the most famous song in the show from recordings that are totally different from what the writers intended.

The Threepenny Opera’s most famous adaptation was in 1954 when Marc Blitzstein’s version opened off-Broadway with the great Lotte Lenya, who was composer Kurt Weill’s widow, in the cast. This is the production that made the show accessible to a general audience. Since then Michael Feingold and Wallace Shawn have also adapted The Threepenny Opera for the stage with less success than Blitzstein’s version.

Signature Theatre is using a 1994 adaptation from London’s Donmar Warehouse with Robert David MacDonald translating the dialog and Jeremy Sams translating the lyrics. This version is set against the coronation of King William V (Prince William.) While the modern setting makes the show more relevant, the plot is still Brecht’s. Macheath (Mitchell Jarvis) is a murderer who keeps escaping police and is having an affair with Polly Peachum (Erin Driscoll.) Polly’s parents Mr and Mrs. Peachum (Donna Migliaccio and Bobby Smith) are not thrilled with this decision and Mr. Peachum asks Jenny (Natascia Diaz), who is an ex lover of Macheath, to give him information that will lead to his arrest. Unfortunately police chief Tiger Brown (John Leslie Wolfe) has been protecting Macheath all of these years. Then there is Lucy Brown (Rick Hammerly) who keeps Macheath from being caught by the police. Put this plot all together and you have a portrait of a man that thinks he is invincible. I won’t give away the ending but let’s just say it’s not what you think it is.

Performance wise the actor playing Macheath has to have the sinisterness and power to carry the role. These are two traits that Mitchell Jarvis does not have. His singing isn’t a problem as in “The Ballad of Easy Life,” but his acting isn’t strong enough to compete with his fellow performers.

Erin Driscoll gives a strong and wonderful performance as Polly Peachum. This is Driscoll’s second lead role this season after just completing Violet at Ford’s Theatre. Her vocals on “Pirate Jenny” and “Barbara’s Song” prove once again that she is a true leading lady.

There is nothing more pleasurable than watching Bobby Smith and Donna Migliaccio as Mr and Mrs. Peachum. These are two veteran actors that are shear perfection and their duet “Kids Today” is a master class in performing. 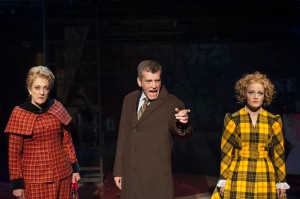 Natascia Diaz as Jenny has the task of performing “Mack The Knife” (known as “The Flick Knife Song” in this version) and does so with great power. The song was originally written as a dirge so don’t go expecting to get the “scooby dooby doo” jazz swing approach as made famous by Bobby Darin and Ella Fitzgerald. The version in the show is the true one.

Rick Hammerly as Lucy Brown adds comedic touches to the somber mood of the story while not over-camping the character and John Leslie Wolfe as the corrupt police chief Tiger Brown gives a solid performance as does Thomas Adrian Simpson as Smith.

While there are many adaptations of the text with this show, one thing never changes, the music and orchestration of Kurt Weill. All productions wisely use Weill’s original charts, proving some things don’t need any improvement. Gabriel Mangiante leads the seven piece orchestra through Weill’s musical opus expertly.

Director and choreographer Matthew Gardiner has staged the show for today’s audiences while keeping the sensibilities of the original material intact.

While I still find Marc Blitzstein’s adaptation the best, Signature Theatre’s The Threepenny Opera is a must see. Featuring some high end performances and Kurt Weill and Bertolt Brecht’s score standing the test of time, here is one musical that is still relevant 86 years after its premiere. When a show holds up for that long, it must have something.