1. Underneath the Lintel at Metro Stage.

“…when Paul Morella is onstage in this show, it’s a solo turn of the highest caliber and definitely one that needs to be seen.” – Elliot Lanes

Synopsis: A returned library book that is 113 years overdue and the obsession to find it’s owner. A clue scribbled in the margin, an unclaimed dry-cleaning ticket, tickets to the Peking Opera, a love letter written in Yiddish…Multiple clue and a world-wide search that ultimately decode the meaning of life. A metaphysical detective story that is funny and fierce, quirky and smart. 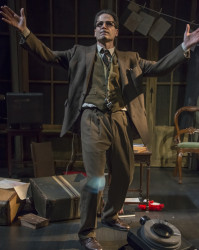 Paul Morella as The Librarian in ‘Underneath the Lintel.’
Photo credit: Chris Banks.

2. Vanya and Sonia and Masha and Spike at Center Stage.

“Nothing says explosive family drama than director Eric Rosen’s adaption of Vanya and Sonia and Masha and Spike now playing at Center Stage. The play triumphs in comedy, sibling’s rivalry and defines what it means to confront one’s issue head on.”  – Sakiera Malone

Synopsis: In bucolic Bucks County, PA, Vanya and his sister Sonia have frittered their lives away living in the same farmhouse where they were raised. Their quiet existence of unease and regret, however, is rocked by the arrival of their glamorous movie star sister (and landlord) Masha, and her hunky boy toy, Spike. As their visit unfolds, a lifetime of sibling rivalry explodes into a weekend of comedic pyrotechnics. Acclaimed playwright Christopher Durang (The Marriage of Bette and Boo, Sister Mary Ignatius…, Center Stage’s My America) weaves Chekhovian themes and modern wit into an unforgettable experience critics have hailed as “a sublime state of hilarity” (New York Magazine). Vanya and Sonia and Masha and Spike is a co-production with Kansas City Repertory Theatre. 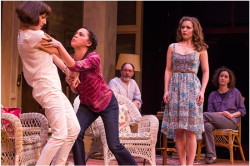 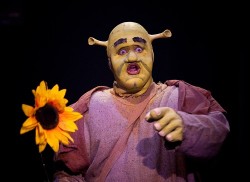 Synopsis: At 10:25 a.m. on October 2, 2006, a gunman entered an Amish one-room schoolhouse in the Old Order Amish community of Nickel Mines, PA. Within one hour, 10 girls (ages 6-13) were shot, five were killed, and the gunman had committed suicide. What occurred in the wake of this tragedy stunned the nation. The Amish Project is an unforgettable account of the Nickel Mines shooting and it aftermath seen through the eyes of seven characters. 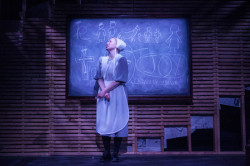 5. Living Out at GALA Hispanic Theatre.

“Living Out is compelling thanks to the tight cast… – Roger Caitlin

Synopsis: Ana, a Salvadoran nanny and a mother of two. Nancy, a lawyer challenged by fulfilling both personal and professional goals. Two working mothers who make difficult choices so they can provide a better life for their children. A funny and touching play that explores the shared humanity between a nanny and her employer and the differences wrought by race, class and immigration status. 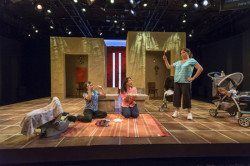